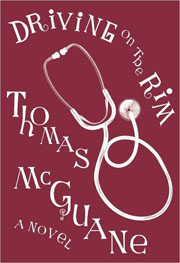 "Into the shitcan with everything ironic for the fun of it,” thinks the anti-hero of Thomas McGuane’s 1973 novel Ninety-Two in the Shade, which was to American literature something like what Sgt. Pepper’s Lonely Heart’s Club Band was to popular music six years earlier, in maybe something of the tone of “Paint It Black,” too. With its harsh absurdities of character and plot and the furious energy of prose like glorious laughter from a clown vaulting over a cliff, it was one of the books that made an entire generation of readers want to write.

What can be charming in an anti-hero is less so in a real literary hero, however. The first few chapters in McGuane’s latest novel, Driving on the Rim, threaten to offer belly laughter and nothing more, thus raising the specter of decline—whether of a great writer’s abilities, the culture at large, or the power of the written word itself. Fortunately, by the end of the book readers will find they have been compelled by a wit as devastating as ever and a prose that is precisely evocative of the unknowable human soul and the fierce beauty of the natural world.

McGuane’s spiritual concerns, too, are hard to miss now. His narrator’s mother, for starters, is such a staunch Pentacostalist that when she’s eventually committed for public manifestations of faith, she “pronounced it wonderful to see that Jesus was there too.” His father’s a World War II veteran and deserter who still lives mostly in those years, though he goes through the motions of his wife’s faith as the three of them struggle through a hardscrabble life most identifiable by a period when they travel en famille as itinerant rug-cleaners. A theme of oddballs and misfits runs through the novel, as it did in McGuane’s early work; but the first thing we learn about the narrator, Berl, is that his full given name is Irving Berlin, “author of ‘God Bless America’”—inviting us to read his story as connected to, if not symbolic of, this country at its moment in time.

Driving on the Rim’s moment is indeed current: over the course of its story the events of 9/11 occur, though Berl happens to be out of the country, and they occasion quite some somber reflection from him, if little overt connection to subsequent plot events. In the present plane of the narrative, much of the central action centers on the administration of a health center and the possibility of malpractice. The young Berl, with the help of a neighbor who steps in as moral guide and hunting mentor, becomes a doctor, originally for that most red-blooded of American aspirations—money—while engaging with women in a way that’s less single-minded: the young Berl seems a bit more like Tom Jones than current, insightful, or even sensitive.

But soon Berl’s motives and worries expand and deepen, even as his memories and daily events amble along at the ruminative pace of a small Western town. Even the most mundane of objects there is rendered with the precise, enlivening detail of someone who knows them inside and out and appreciates their true value, things like “a twenty-gauge Winchester shotgun with brass tacks in the stock like an Indian gun” and “a white Shakespeare Wonderod and a Martin Blue Chip reel.” Of course, the only real wonder is that McGuane, author of the essays about everything from tying flies to Isaak Walton collected in The Longest Silence, interrupts any actual fishing that Berl starts to do with unscheduled patient visits or other plot events. But McGuane’s keen eye and command of the exact names of everything—trees, grasses, wildlife, Montana land formations, the type of German tanks that traumatized Berl’s father (Königstiger), even a snowplow “spewing a great falling wing . . . on the roadside”—is beyond a writer’s mastery of technique. “I seized on everything,” Berl says in the emotionally charged aftermath of a murder/suicide that congeals into the core of his spiritual crisis as well as a central plot device, “wishing I might always be able to seize on everything.”

McGuane does the same in every sentence. He never drops a stitch—even literally, when Berl treats a moderate cut in a boy’s foot from a piece of broken glass: “I gripped the suture needle with a needle driver—actually an ordinary hemostat . . . and began quickly stitching, making certain the needle penetrated below the base of the wound before rotating it out, reaching through to pull up the loops and tying the square knot.” On this book’s publication, its author told a New York Times reporter he believes a novel’s main aim should be to entertain, and with plot turns like a switchback mountain road, and several small towns’ worth of quirky, delightfully observed characters, Driving does just that, if occasionally with the breathless grin of a Vaudeville hoofer in the second show of the night. McGuane can be as irreverent and bawdy as any lifelong teenager—“Saint Theresa can make Christ sound like a nine-battery Chinese vibrator,” Berl reflects—but what he broods on increasingly, through plot strands that dangle and cross like a loosely held loop of prayer beads, is sin: “In the words of my late mother, I understood I would have to be shriven.”

So the haul both he and his creator are in for is the long one. “Literature is the ditch I’m going to die in,” McGuane told that reporter, but he’s not dead yet, and Driving on the Rim has as many allusions as quips—to Seneca, Pablo Casals, Patsy Cline, ZZ Top, John Donne, Socrates, Harry Truman, Michael Jordan, and others—all the range you’d expect from a recently appointed member of the American Academy of Arts and Letters who was once known as Captain Berzerko. But the sparks he sends out now are from a steady stroke. Even minor characters are evoked with something of the same quality Berl expresses about breathlessly watching a she-wolf hiding its six pups: “surprise that a wolf doesn’t look like anything else on earth.”

Between the entertainment, the artistic mastery, and the frank spiritual quest, the total effect of Driving on the Rim is uplift. “Prolonged bad weather aroused distaste for one’s fellows, but life had taught me that the quality of light could enlarge the heart,” Berl says. So can this book. Even if it doesn’t make you want to write, it’ll make you want to travel West, read more McGuane, or simply keep on living.