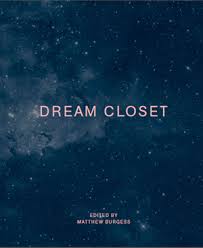 “I hid in closets, behind doors, and under tables,” writes Matthew Burgess, editor of the fascinating anthology Dream Closet, “meditations on childhood space.” “I crawled into the cabinet under the sink,” he continues, “and climbed trees to find hidden perches.” He loved books “filled with small spaces that doubled as portals to other worlds.” No wonder he would one day edit an anthology filled with personal tales of such portals.

Inspired by the phrase “dream closet” from Denton Welch’s novel In Youth Is Pleasure, where a child transforms a bathroom into an imaginative space, Burgess asked a variety of artists—writers, painters, and photographers—to interpret this concept of a child’s private space. The results (six chapters containing twenty-five prose pieces, twenty-four poems, and thirteen works of art) are richly varied and engaging, attesting, in varying ways, to the importance of both hiding and becoming “unhidden.”

For many of the artists, hiding in a private space was partly playing a game and partly following an instinct. A lovely photograph by Brett Bell called “Henry” captures both aspects. The image shows a young child lying on a leaf-strewn lawn with his head inserted in a cardboard box labelled “HUNTINGTON HOME.” The child no doubt believes he is hidden from view, as he cannot see who might be watching him from his new “home.” This basic premise of not being seen and therefore feeling safe runs through many of the pieces here, such as Ron Padgett’s—who, at fourteen, built a private crawl space in the garage, complete with a magazine from the Soviet Union and a short-wave radio to hear the BBC. The immediate world is shut out and the larger world let in.

In his introduction to the anthology, Burgess shows us the simplicity and complexity of this urge for a private space. He recounts how Vladimir Nabokov tells, in Speak, Memory, of crawling into a “tunnel” between furniture and a wall: “I lingered a little to listen to the singing in my ears—that lonesome vibration so familiar to boys in dusty hiding places, and then—in a burst of delicious panic, on rapidly thudding hands and knees I would reach the tunnel’s far end, push its cushions away, and be welcomed by a mesh of sunshine.” As lovely as this description is, Nabokov makes one mistake—claiming that the experience is limited to boys. Virginia Woolf recalls in “A Sketch of the Past” how as a young girl in the nursery, she imagined herself “lying in a grape and seeing through a film of semi-transparent yellow.” Many female voices in Dream Closet further demonstrate that this need for seclusion transcends gender. Marie Howe writes of going to the basement as a child with eight siblings to create “a town” made out of “boxes and blankets and overturned chairs.” One of the children would act as the Town Crier, calling out the hours: “Ten o’clock and all is well.” Melissa Febos, in “The Rule of Burned Things,” hid in a closet and burned scraps of paper and pillow stuffing in a Mason jar: “Spark and flash of becoming, sharp scent of shape shift.” Her secret place gives her the power to create and destroy.

One of the delights of this anthology is the creativity of the contributors in how they locate that private place. For Christina Olivares, in “At Twelve,” that space was found when diving into a pool for a dropped penny: “We push toward a silence that would keep us safe.” In a photograph by Libby Pratt, we see illuminated pages of a book held open by two fingers. The very act of reading becomes that safe place. In a photograph, perhaps the most stunning of all the artwork, entitled “James at Dusk,” by Michi Jigarjian, we see a baby illumined by the sun prancing inside a sheer curtain, both hidden and yet visible, the joy of the act palpable. Only one writer in the anthology finds the “dream closet” to be disturbing. Julian Talamantez Brolaski, in “The Bad Dream Closet: Amphibian Enterprize,” describes a reoccurring nightmare where he is stuck in a well with a monster who is “Literally holding my breath in its claws.” Though nothing happens in the well, the image itself is terrifying for both Brolaski and the reader.

For some writers, the concept of hiding and being revealed has to do with altering his or her physical appearance. Jeffrey Conway, in “My Childhood in Drag: Five Photos,” offers no explanation, just vivid descriptions of how he appears in each photograph. For example, one Halloween when he’s in sixth grade, he dresses as his mother:

I wear her poofy brunette wig, coffee-colored nylons, her short read and blue print polyester dress, her white cotton sweater over my shoulders (the sleeves dangle at my sides) with only the top button fastened. I have stuffed the dress so that my “breasts” are huge. I wear orange lipstick. I can remember the flash of dread I felt when my dad said, just before I dashed out the front door, “What will your football teammates say when they see you?”

Perhaps they wouldn’t recognize him? Or would they see him for the first time? “We hide ourselves in order to become unhidden to ourselves,” observes Matthew Burgess in his introduction. In the act of donning a costume, Conway becomes “unhidden” to himself, his family, and the world.

By the end of this anthology, the link between hiding and transforming becomes clear. In “The Imaginal Moi & the Clubhouse,” James Lecesne tells of hiding family objects, such as his mother’s butterfly pin, in his clubhouse. When he goes back to retrieve the pin, it’s gone. He concludes his story with this realization:

Years later, when I learned how butterflies actually get made, I couldn’t help thinking about my clubhouse and that long lost butterfly pin. Once inside the chrysalis, the caterpillar slowly disintegrates, dissolves into a soupy mess and disappears. All that remains of him is something called the imaginal cells; out of these very elemental and essential cells, a butterfly is born.

The child cannot understand the profound implications of retreating into that private, enclosed world. Only the adult looking back can begin to unravel the layers of meaning of entering the “dream closet.” The fifty-four artists of this unusual anthology, as well as the editor, serve as trustworthy guides to these transformational “portals to other worlds.”