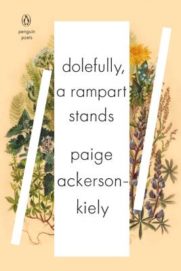 I first came across the poetry of Paige Ackerson-Kiely in Michael Robbins’s “Playlist,” a litany of Robbins’s favorite poems and songs, each with a brief descriptor as to its allure. Ackerson-Kiely’s poem “Misery Trail” is the first item on the list. Robbins writes that when he first discovered the poem, on Facebook of all places, it was the saddest poem he’d ever read. I immediately hunted “Misery Trail” down online, and while I didn’t agree with Robbins’ sentiment, I did find in the closing lines an uncanniness of tone and mystery of intent that unsettled me. The lines read: “At certain times of day a field can blind you. / So I walked. Uncharacteristically slow. / You couldn’t know how slow I walked.”

Dolefully, a Rampart Stands is Ackerson-Kiely’s third collection of poems, and it is a book strewn through with mystery and the uncanny. Lines seem to appear out of nowhere, lines that are at the same time wholly of and entirely outside their poem, reshaping, amplifying and at times destabilizing all that has preceded them. Often they come as closing lines. “Folding Chairs,” a poem that in part describes a communal meal at a church ground, ends like this: “I am afraid // I will continue to burn the supper. I am afraid / I have not made enough for everyone.” That the speaker has such fears transforms the meal into something more forbidding and intimate, bodily almost, as if the burning of the supper is an act of transubstantiation. Is the speaker worried she herself will continue to burn? That she is not enough?

Or take the ending of “Laconia,” a prose poem set around a gathering at a lakeside bonfire, to which a younger woman accompanies an older man. The poem is shaped by unsettling imagery—“Occasionally, this time of night, you hear loons calling across the water, the sound is foggy, sad, the way it fades toward the end, like a dinghy sighing before it turns to face a storm”; “The night had become black like the space where a tooth used to be”—and is propelled by the suspense found in these lines, which suggest something violent or tragic is approaching. When the event does arrive, a can of beer thrown into the fire and exploding into the eye of a loon, it seems anticlimactic, but Ackerson-Kiely closes with: “The loons suddenly screaming: where did you go? Tell me where I am! The loons screaming and screaming, trying to locate a familiar, trying so goddamn hard to know something about love and a place before you go extinct.” These lines carry more violence, raw pain, and emotional power than any single event the poet could have described.

One effect these lines have is to imbue the quotidian with the uncanny. An enigmatic miasma floats through the poems in Dolefully, a Rampart Stands, which are, in the main, founded in the routines of the ordinary—or what we generally dismiss as ordinary: the everyday struggles of contemporary small-town America, particularly the rural northeast, with all its poverty; addiction; domestic, political, and environmental violence and corruption; and the wholesale depression these circumstances generate. Lunches, bonfires, walks through the outskirts of town, are all inverted into activities peculiar and mystifying. “There is a heroin epidemic in your small, northern town,” Ackerson-Kiely writes in “Ellesmere Island”; “People go numb all over the place. You don’t know their names, you don’t name them.” This description of numbness follows an eerie account of the speaker’s job at a pet store, with duties that include freezing live rodents before feeding them to the store’s boa-constrictor: “because you’ve read Jack London and know that they will go numb, which will hurt, but then they will go to sleep, which is, in your experience, gentle.” [60] The repetition of “numb,” the allegory implied in the feeding of the snake and the feeding of addiction, and the Biblical association of the snake all work to transform the ordinary (and, unfortunately, heroin epidemics are increasingly ordinary) into something far more eerie, illusory, and powerful.

Dolefully, a Rampart Stands confronts the anxiety of small-town life defined by an oftentimes understated but increasingly distressing economic and social collapse, and illustrates how the pressures of a failing place exert themselves on the individual body and self, in particular the female body (“This isn’t an opportunity to talk about the body” Ackerson-Kiely deceptively writes in the collection’s opening poem, “Inventory of Ramparts”). This collapse divests the body of its connection to other bodies, inspiring an ever-greater sense of isolation and estrangement. As the speaker of “Inheritance” notes, these places no longer endow their inhabitants with homespun values and a sense of community, but with debt and disaffection: “O hey there gorgeous, scaling the bannister / of the mortgage I shall inherit, meekly, / in some failing town: There is no winning / except to remember I am so lonesome.” It is impossible not to be troubled by the poem’s implication: for America, alienation and ennui is the new norm. In “How the Town Looks,” a portrait of one such place, sex is had “to make someone feel better, sex // so you don’t have to listen, sex in the room / where the TV spills blue light all over // bodies, like galaxies . . .”

In “Book About a Candle Burning in a Shed”—over twenty pages describing a small community’s investigation into the murder of a young woman—this correlation reaches its apogee. The degeneration of the town is echoed and amplified by the annihilation of the body: “Motoring through the outskirts, daylight makes the downtown look like a bloated abdomen.” It is deftly written from the perspective of a male police officer, and manages to capture, mangle, and re-imagine the tone of a noir-ish detective-novel (Dorothy B. Hughes’s classic In a Lonely Place kept coming to mind). Running adjacent to the story are lines so mystifying as to stop the reader in their tracks: “The fields you walk out in at dawn, mostly alone” ends one section. “To come blindly to a thing so beautiful. To turn away as if not seeing was a choice” ends another.

Ackerson-Kiely’s talent for the uncanny is extraordinary. Her ability to create entire atmospheres through single lines elevates her poems to something approaching the oracular, while never straying from the colloquial and the quotidian. One never feels totally at ease in an Ackerson-Kiely poem, never sure when a line will appear to dismantle or transcend their surroundings, and the collection benefits greatly from this insecurity. Dolefully, a Rampart Stands announces a pastoral poetry for the 21st Century, in which farms are industrialized, towns are demoralized, their residents disinherited of the American Dream, and violence, addiction and loneliness resettle in the void. It is a brilliantly disquieting collection.