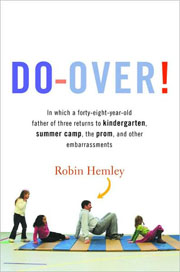 In Which a Forty-Eight-Year-Old Father
of Three Returns to Kindergarten,
Summer Camp, the Prom,
and Other Embarrassments

With a humility many adults admire in children but can’t quite muster in adulthood, author Robin Hemley returns to ten unsavory disappointments of his youth, from a year spent in Japan as an exchange student (truncated early due to homesickness) to a flubbed line as the Heavenly Messenger in a grade-school play. The entertaining premise of Do-Over!, fortunately, sustains itself throughout the entire book, and provides a bevy of cultural insights and non-didactic “teaching” moments along the way.

The joy Hemley exudes in the presence of his daughters, who appear throughout the book to offer “tips” on how to be more authentically kid-like, is a good example of Hemley’s unique sensibility: “No, don’t get the SpongeBob jammies . . . They’ll hate you and never speak to you! I know kids!” advises 15-year-old Olivia. In response, Hemley creates a hypothetical business card:

Hemley likens the “regressive pull” of entering a childlike mindset to riding a bike: “Somewhere deep inside, I’ve memorized the patterns and behaviors of childhood, both good and bad, and when I put my feet back on the pedals, off I fly.” Do-Over! creates a tension between the spontaneous self-organization of children, with their sixth sense for fairness and the importance of punishments that fit the crime, with the violent chaos that is modern society. Though many of Hemley’s do-overs bring attention to his Jewishness, and how this fed into his feeling of isolation in certain contexts growing up, a reader can’t help but remember Jesus’ main criteria for entering Heaven: becoming as guileless as a child. The seriousness—and seamlessness—with which Hemley undergoes this transformation, albeit for the purposes of a book, is striking. The book’s most moving chapter is “Mama’s Boy: House Do-Over,” wherein he relives the painful and recent death of his mother and the orthodox funeral held in her honor, during which the presiding rabbi began ripping Hemley’s shirt: “I had forgotten about that part of the ceremony. Ripping shirts at funerals, breaking a glass at a wedding. Cutting off the foreskin at birth. There’s a certain amount of breakage involved in being a Jew.”

Some of Hemley’s do-overs are, naturally, more “successful” than others, but throughout the book, Hemley strives to maintain a balance between gleeful abandon and the genuine anxiety he feels upon returning to these sites of disappointment. Do-Over!’s most pleasurable reward for the reader is the opportunity to watch Hemley navigate between wide-eyed astonishment and self-consciousness—not of his gawky teenage-self, but of his position as an adult trying to be accepted as “one of the gang”: when Hemley is “found out,” whether among kindergartners or high-schoolers, hilarity erupts. Out on an evening walk with teens from his former boarding school, he experiences confusion regarding which rules apply to him: “Is it okay if I stop for a beer?” he asks the chaperone, who says “I don’t think I’m in the position to give that permission.” Hemley has his beer, only to be teased the following morning by the director of the school: “I heard you had a little knee crawl in Chattanooga” (knee-crawl being Southern-speak for “bender”).

Do-Over! is a must-read for the literary elite (see how fun not taking yourself so seriously can be?), parents (it’s an incisive treatise on child psychology), and world leaders everywhere. Intimidation, Immaturity, Sadism, Indifference and Tough Luck: these are the “values” Hemley remembers as having been the “writing on the wall” at his original summer camp experiences, and most likely in other institutional spheres as well; these non-values sound cannily familiar in today’s international political climate. Hemley is to be applauded for taking an unorthodox approach to reintroducing humanism to our rarefied literary sector—and for surviving to tell the tale.