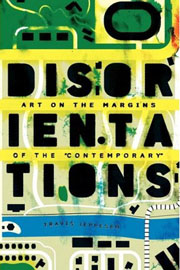 “If one were to compare Henri Matisse’s work to something, it would have to be an orange”—so goes Guillaume Apollinaire’s memorable description of the great modernist painter’s work. Apollinaire’s criticism presents some of the most engaging, inventive words on the early years of modern art, applying the poet’s ability of verbal contortion in the face of the groundbreaking, neoteric tendencies of the era’s visual artists (themselves busy destroying the old guard’s parameters and familiar forms). In his introduction to his collected writings on contemporary art, Travis Jeppesen lays down a similar credo: “What is at stake here is language and the ways in which it is deployed. The debates over the purpose of art criticism seem to ignore the simple, basic fact that the art of art criticism is in fact a literary act.”

Like Apollinaire a century before him, Jeppesen is a poet and novelist as well as an essayist.Disorientations collects this interesting writer’s art criticism: mostly focused on Prague during the years 2003-2006, it features short, animated reviews of exhibitions, interviews with expatriate artists, and reports from the sets of film shootings run by such kindred spirits “on the margins of the contemporary” as Bruce LaBruce and Sue de Beer. All the pieces share a rather rough, jargon-free engagement with their subjects.

One of the more notable services Disorientations offers is an education about Eastern European art—so it’s a shame that a piece on the Slovenian art collective IRWIN’s book East Art Map comes so late in the collection, as it lays out the distinguishing features of the region’s art (along with the challenge for outsiders to comprehend it on its own terms). But that said, don’t come here for insights into more “Western” figures: a piece on Joseph Beuys from 2006 is markedly non-insightful, a piece of information journalism that reads cold.

An example of Jeppesen’s insistent, impatient critical approach can be seen in a review of Home Gallery’s attempt to offer a representative show of “Contemporary Australian Art In Prague”: “There’s something quite slothful. . . and uninspired about constantly subjecting the art-going public to these insufficient surveys of national production.” And of course he’s right on this point. Constantly fighting against boxes and the practice of curators and artists as well as critics to pigeon-hole, Jeppeson hates anything easy or overly simplistic. Disorientations also rails against the dangerous label of exoticism that faces East European art; Jeppesen not only engages this question, he goes a way in producing an answer: develop a new critical language.

Disorientations doesn’t always rise up to this challenge, because Jeppesen is a poet, a writer free of constraint: producing copy for numerous small publications on a deadline sees him trying on the mantle of the serious art critic and not always succeeding. He’s at his best when he lets his visceral, often surreal self free of the merely informative mode of writing and moves into his own world, where criticism is a kind of gnarled (and often funny) video poetry: writing on Eva and Jan Svankmajer, for example, he describes “Eva’s manic swirl of colors forming the cunt allegory, sweeping virtues informed by prosaic maladies. . . Jan and his creatures, they haunt him like a melody. The monster in the machine.” This is seeing art through the eyes of a talented poet, a worthwhile ekphrasis that Jeppesen is right to demand more of in current art criticism.

Challenging the social conditions of the contemporary, international art world at every turn, this book injects interest in Eastern Europe at a time when, as Jeppesen points out, it is in danger of being neutered by the more commercial West or being overlooked entirely in favor of China and Asia. Admirably, like his publisher Social Disease has already done with the stuffy English literary scene, he has knocked down a couple of the walls holding up the established art press with his Disorientations.