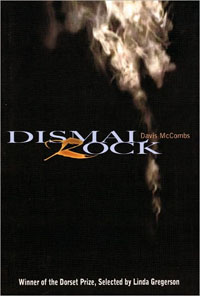 Who wouldn’t be the slightest bit apprehensive to read a poetry collection with a coal-black cover featuring a waft of mysterious smoke floating upwards? And the title of Davis McCombs’ second book, Dismal Rock, seems as morose as the jacket art. I am happy, however, to report that “dismal” is not a melodramatic adjective that the poet has chosen; Dismal Rock, rather, is the name of a sandstone formation in Edmonson County, Kentucky that serves as the geographical and poetic locus of this impressive, regionally-inspired collection.

McCombs has distant genealogical roots in the region, which adds a command and organic feel to his work, and he has thorough research that he incorporates into his poems lucidly and gracefully. (Who knew that Keats had relatives in Kentucky, to whom he wrote a letter in September 1819?) The first third of Dismal Rock—the strongest portion—is a sixteen-poem series called “Tobacco Mosaic,” part historical documentation, part tribute to burley tobacco culture. The title, as McCombs explains in the notes, refers to a tobacco disease, and the sequence is ultimately elegiac. McCombs approaches burley tobacco through many oblique angles. “Lexicon,” for example, explores narrative through local speech: “they are saying white burley, lugs and cutters. / Old men are whittling sticks with their pocketknives / and they are saying Paris Green.”

The “Tobacco Mosaic” poems also explore local characters, including Bat Gaddie, McCombs’s great-great-great grandfather, and span all the way to the present to the character of “the young man,” presumably the poet. The weight of this history and tradition resonates throughout. McCombs does have a taste for the grand, often lamenting, poetic statement, and though it might be off-putting for some, it typically succeeds. The final poem, “The Sharecroppers,” remembers “that day of the developers and the divvying up,” and finishes

he thought how nothing he could ever say would match
the sound of the undergrowth’s inquietude that last night
when barred owls talked in the timbered sink, and he heard
in the call of the towhee the sound of the end of the world.

The larger portion of Dismal Rock, “The Mist Netters,” offers an assortment of poems in which the region also plays a prominent part. “Self-Admonition at Summer Seat” is an ars poetica in which the speaker commands himself through the poem’s beautiful language: “Consider the shelf of cracked bedrock where the roots / of cedars knuckle down. Knuckle down.” “The Last Wolf in Edmonson County” is a self-explanatory elegy in which the speaker waits at “the pedestal of Dismal Rock” “where the blood-spoor / of local narrative intersects a trail gone cold”—a line that speaks in a larger sense to the territory McCombs explores in his work. These poems are first-rate. “Rosetti in 1869” and “The Elgin Marbles,” which are also included in “The Mist Netters,” are also fine poems, but because of the depth that McCombs achieves in depicting the region, they simply feel out of place, as an antiquated European would have felt in this area of Kentucky. “Bob Marley,” an entertaining, well-wrought poem of tourism-gone-wrong in half-rhymed couplets, suffers in a similar way; ultimately these poems pale because what surrounds them is so cohesive. Nevertheless, McCombs is an intelligent, focused poet who always aims to match a poem’s intellectualism with emotional depth, and Dismal Rock is a proud testament to his ability.