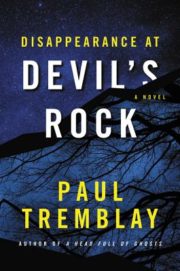 Often the horror genre implores its readers to embrace some level of delightful hokum. Fantastical events become the fulcrum around which the story pivots. The supernatural turns toward metaphor, provides a shocking contrast to reality, or at worst becomes an end in itself.

For Paul Tremblay, the horror creeps out of the spaces between the explanations we craft to reconcile irrational occurrences. In his latest novel, Disappearance at Devil’s Rock, the unthinkable situation is the disappearance of a child. Teenage Tommy Sanderson sneaks off to a nearby state park to drink illicit beers with his friends, but vanishes into the woods. His nervous pals Josh and Luis phone Tommy’s mother, Elizabeth, in the middle of the night to ask if he happened to come back home—they haven’t seen him since he ran off into the darkness without a word.

The novel begins as a missing-child narrative dealing in tropes familiar from both brooding thrillers and those pathos-drenched Oprah Book Club selections of yore: the calm but stern detective trying to navigate through a fog of misinformation; the bustling makeshift headquarters where volunteers form search parties; a carrion-scavenger flock of cameramen and reporters; stunned family members sorting through the detritus of a vacant bedroom and blaming themselves.

Tremblay’s deft exploration of the maddening nature of uncertainty distinguishes the book from standard fare, though. The increasing pressure of doubt pushes otherwise pragmatic characters to embrace rumor and superstition. Frustratingly fragmentary bits of information compel Elizabeth to explore her darkest imaginings. There are Tommy’s diary pages, which continue mysteriously appearing two and three at a time on the living room floor, and rumors of a shadowy figure seen lurking around the neighborhood—one she strains to connect to a wilting phantom she might have seen one night in a dark corner of her bedroom, a spectral shadow that look awfully like the missing Tommy.

The author torments his characters with the terrible weight of his questions, but ultimately he doesn’t skimp on the answers. As with his last novel—the exceptional Head Full of Ghosts, one of the best horror novels of the last couple decades—Tremblay is adept at knowing just how much to reveal so as to retain the essential mystery of the unknown without being vague or coy. In doing so, he achieves the disorienting effect of looping the reader into the same confounded paranoia from which the characters suffer. Without ever explicitly inviting the reader to make a leap of logic, he tricks us into doing it voluntarily. Like the great Shirley Jackson or, more recently, Brian Evenson, Tremblay is able to inspire the kind of dreadful doubt of our own perceptions that lingers, the shadow of a doubt that won’t die.