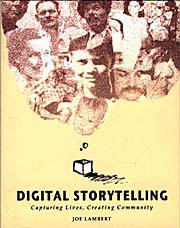 In 1994, Joe Lambert, Nina Mullen, and Dana Atchley founded the Center for Digital Storytelling (CDS) in Berkeley. CDS helps people use digital media to tell meaningful stories from their lives through workshops held monthly in Berkeley and annually in a few other cities; the group also provides a clearinghouse of resources on storytelling and new media.

Lambert's Digital Storytelling: Capturing Lives, Creating Community lacks a sole definition of digital storytelling, so some may finish the book still questioning the difference between a digital story and a documentary film. Not until Chapter 4 do we get this clue: "If the writing is no longer than the front and back of a 4 x 6 card (about 1 double-spaced typed page), it insures that the writing will lead to a two- to three-minute story when narrated. Just the right size." In Chapter 5, Lambert announces his preference for "the frank admission of responsibility that the first-person point of view provides." Information like this allows us to piece together a definition of a digital story as a two- to three-minute film that holds personal meaning for the storyteller, who, whether technophile or not, can easily use Photoshop, Premiere, and desktop video in a production context to create the story on his or her own. Compared to a documentary film, a digital story seems a smaller, shorter production and a more overtly provocative form.

Definitions aside, new digital storytellers and digital storytelling facilitators can benefit from lessons in Lambert's accounts from ten years' experience with the process. At least five chapters touch on how one might make a digital story (using storyboards, soundtracks, etc.) and use it for personal or professional needs. Chapter 10 has a useful section on how to tell an organization's story. Lambert pretty much withholds the details of making a digital story, perhaps in hopes people will enroll in CDS's workshops. On the other hand, he doesn't overwhelm readers with step-by-step instructions to the kind of technology often rendered obsolete in the time it takes to publish a book. At least another five chapters, which include excerpts from digital stories and interviews with experts in the field, discuss how digital storytelling has been taught and applied. Appendices provide web resources and a bibliography.

Lambert acknowledges the ironies of using the cutting-edge technology of digital media to encourage the ancient values of oral culture; still, as a self-proclaimed Berkeley liberal, he argues that digital storytelling is rooted in the notion of democratized culture that was the hallmark of the folk music and cultural activist tradition of the 1960s. "Where a mainstream culture provided glamorized and idealized lives of the movie star-perfect people living in dramatic and exotic situations," he writes, "the populist artist in the folk traditions sought not just to portray, but to empower." When he connects this phenomenon to how story is at the core of human activity, Digital Storytelling resonates with purpose.

He describes how "modern culture . . . has clear-cut away our use of story as cultural glue." "In traditional cultures," he writes, "the intermingling of personal stories, communal stories, myths, legends and folk tales not only entertained us, but created a powerful empathetic bond between ourselves and our communities." Lambert is drawn to the idea of "re-storification": "a painful but critical process to find ways to integrate story back into our lives." Invoking educational and artificial intelligence theorist Robert Schank, Lambert argues that the road to understanding human intelligence is built on story, that the process of developing complex levels of stories and applying them to specific situations offers a map of human cognitive development. "Stories," Lambert maintains, "are the large and small instruments of meaning, of explanation, that we store in our memories. We cannot live without them." Moreover, Lambert asserts that the idea of restorification was validated by the unapologetically reflective and sincere storytelling that occurred in America after 9/11.

Lambert holds that "the only real way to know about someone is through story." In this way, digital storytelling holds so much promise for disability and intergenerational connectivity, identity and diversity awareness, and reflective practice. In Chapter 10, Lambert addresses these and other applications of digital storytelling—as applied in activism, career development, curriculums, futures thinking/scenario planning, job preparation, journalism, professional reflection, team building, and technology training. Just think of the possibilities digital storytelling may hold for adult learners at community colleges and job training centers. Instead of writing a traditional essay about one's community, one builds a digital story. If the story never gets published on the web or elsewhere, at least the adult learner has gained a marketable skill for today's workplace: how to use digital media in a production context—just one way in which digital storytelling is an empowering narrative form. Despite its occasional awkwardness and frequent typos, this book serves as a first glimpse into a new wave, not just in form and narrative, but in a variety of fields interested in social well-being.