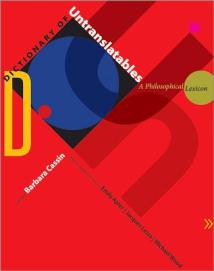 The challenges of exposing the full range of meaning conveyed by even a single word can be the subject of an entire book. John Portmann’s When Bad Things Happen to Other People (Routledge, 1999), for example, explores the ins and outs of the German word shadenfreude. Robert Payne’s Hubris: A Study of Pride (Harper, 1960) focuses on the nuances of that important Greek notion. And Richard Gilman’s Decadence: The Strange Life of an Epithet (Farrar, Straus, & Giroux, 1980) follows the course of that word as, over the course of centuries, it lost its meaning and gained a new one.

In Dictionary of Untranslatables, a stable of learned women and men under the direction of editor Barbara Cassin have set themselves the task of delineating a wide range of philosophical concepts, ostensibly chosen because they lack direct equivalences outside the language in which they were coined. But few concepts are capable of being transported from the forests of Germany to the vineyards of France (for example) without being transformed in one way or another. As a result, the book contains glosses on the varied cultural interpretations of nearly every major philosophical concept that abstract thought has produced. The editors largely exclude mere idiomatic turns of phrase, and restrict their attention to prominent Indo-European languages—romance, Germanic, Slavic. Thus phrases such as séntak bangun (which means “wake with a start” in Indonesian) and shibui (Japanese for the beauty of aging) do not appear. (These and many other phrases can be found in Howard Rheingold’s much shorter and more readable They Have a Word for It: A Lighthearted Lexicon of Untranslatable Words and Phrases, published by Tarcher in 1988.)

This rigorous approach to choosing and framing entries has obvious merit. Rather than exploring, in English, a select number of broad and unwieldy themes—justice, logic, causation— the way Mortimer Adler does, for example, in The Great Ideas: A Lexicon of Western Thought (Macmillan, 1992), or following the well-worn path of philosophical schools, ancient to modern, via the stepping-stones of individual thinkers, Cassin and her crew seize upon specific terms, arranged alphabetically, and attempt to convey what they mean in their original language, and how they change as translators introduce them into new languages and traditions.

Whether intentional or not, this approach plays into the seldom acknowledged fact that in Western thought there are few durable traditions. To add to the mess, philosophers often strive to make their mark by creating neologisms and then expounding upon them at great length. The contributors to this massive dictionary seldom fully expose the defects or ambiguity of the positions they examine, but by keeping their analysis within a strictly circumscribed lexicological frame, they offer insights into a wide array of terms we’ve never heard before, and refresh our appreciation of others we thought we knew well already.

The entry for the word Essence, for example, runs to twelve pages of small but readable type, broken up by a full-page sidebar on “Porphyry’s ‘metaphysics’: Being-acting without a subject,” and a shorter one called “‘Existence’ and ‘subsistence’: The Stoic strategy.” Much of the material in the essay comes from the ancient and medieval worlds, and a good deal of it is theological. It descends to philological minutia on the order of this passage:

We must obviously wait for Candidus the Arian (known by Marius Victorinus, ca. 281/291-361) for the appearance of the feminine singular existentia, along with the abstract existentialitas, whereas in Chalcidius, in his translation and commentary of the Timaeus, existentia is still a neuter plural that refers to onta . . .

I’m not sure why that’s considered “obvious,” but it suggests how closely the authors are tracking the subtle linguistic changes that can nudge the history of thought in new directions.

For a more compelling example, consider the case of Pierre Coste, who, in 1700, translated Locke’s An Essay Concerning Human Understanding from English into French. At the time, two terms that figure prominently in Locke’s work, “the self” and “consciousness,” had no French equivalent. A lengthy sidebar in the thirteen-page entry on Consciousness describes how Coste tackled this problem by translating the English consciousness as conscience, and defended his choice by reference to the writings of his predecessor Malebranche. The entry moves on to an illuminating passage describing how Malebranche had earlier challenged Descartes’ idea that we know ourselves clearly, arguing instead that we know our own soul only very imperfectly, through feeling rather than rational reflection.

This passage may inspire readers to investigate the issue further by hunting up either Malebranches’s Recherche de la Vérité or Catherine Davies’s Conscience and Consciousness: the Idea of Self-Awareness in French Philosophical Writing from Descartes to Diderot, both of which are listed in the sidebar’s bibliography. Yet nowhere in the article are we given an explanation of what the word conscience meant to the French in the early eighteenth century. This may seem a little odd, but we must keep in mind that we’re reading entries that were originally written in French, for French readers, who approach these issues with a set of lexicological tools and assumptions quite different from the ones most English-language readers possess.

The entry on Pathos may be taken as another illustration of how a translator’s choices can bend the course of intellectual history. The author notes that there have always been two opposing views of psychic life: as an active “movement” of the mind, on the one hand, and as the passive register of external events, on the other—the mirror and the lamp, as literary theorists sometimes put it. After providing examples of this split in Greek, Latin, French, and English, the author draws our attention to Cicero’s decision to translate the Greek term pathos by the Latin perturbatio rather than morbus. In so doing, Cicero was not only challenging the long-standing Stoic notion that all passions were to be resisted; he was also attempting to revive what he considered a more sophisticated view of the human psyche offered by Plato. “Cicero took advantage of his role as a creative translator,” our guide writes, “as a fabricator of neologisms and importer of Greek notions, to refresh the philosophical memory that had faded in the Greek vocabulary.”

The story grows even more interesting when Saint Augustine arrives on the scene. He rejects Cicero’s use of perturbatio, arguing that it retains too strongly the negative connotations of the Stoic notion of passion. Augustine prefers to translate the Greek term pathos with the Latin affectus, on the grounds that while passions can often lead to sin and damnation, they are also our only path to salvation, and a sage who was never moved by anything “would be, ultimately, insensitive to good and evil.”

In the course of following such arguments, we begin to form a clearer idea of how Platonic, Stoic, and Augustinian worldviews relate to one another. More importantly, perhaps, we may begin to clarify our own opinions regarding the role passion plays in life, and the role it ought to play.

German terms occupy a prominent place in the dictionary, not surprisingly. In an essay on the French language it is observed that French translators often leave German terms of critical importance untranslated, and the same is true of quite a few English-language translations. This can leave non-German readers with only a vague idea of what Heidegger’s Dasein is, for example, or what process Hegel’s Aufheben refers to. Evidently the best example Hegel could come up with to illustrate this all-important concept of “bringing to an end while preserving and rising above” was canning fruit.

Some of the entries provide choice material for cocktail conversation. In the entry on “Care” we learn that the French have no equivalent for that expressive English word. Whether that fact harbors some deep truth about national character or is merely a fortuitous disjunction between languages remains unclear. In any case, the authors are convinced that the English word care covers a greater range of meanings than the German word sorge. It can act as a verb, as in caring for a sick cat; it can refer to a worry, as is reflected in the phrase, “She hasn’t a care in the world”; and it can refer to a feeling of affection toward something, as in “I care for you deeply.” To English-language speakers, these three senses of the word form a constellation of related but distinct meanings. How could a single French or German term encompass them all?

Commonplace English words such as Pleasure (eleven pages) and Memory (fourteen pages) no longer seem so familiar once Nietzsche and Mallarmé, Spinoza and Lacan have had their say. But the dictionary also has more than enough obscure terms in Russian, Hebrew, Arabic and other languages to keep the curious monoglot up half the night. As an example, consider the Danish term Evighed. The author begins by writing, somewhat poetically:

The majestic eternal moment freezes movement, in contrast with the eternality of the ethical Self. The abstract eternity of the idea, the object of recollection, contrasts with the concrete eternity passionately lived by the existing being stretched toward the eternal as if to the future.

We do not commonly encounter such rhapsodic definitions in a scholarly dictionary. It almost makes one want to learn Danish! The author of the entry (following Kierkegaard, of course) proceeds to differentiate between three senses of the term evighed (all of which are translated by the English work eternity).

Some entries are almost shockingly brief: Form receives only a single column, half of which in devoted to cross-references to other, related entries; and Judgment gets lumped together with Justice in a similarly brief comment. And then there are the omissions. It’s regrettable, but perhaps not surprising, that the French philosopher Gabriel Marcel’s notion of disponsibilitie, usually translated as “availability,” has fallen from favor. But how can it be that Henri Bergson’s élan vital, a phrase still in common use today, failed to make the cut?

The word historicism also lacks an entry, though three pages in the entry History are devoted to “historical knowledge, the crisis of history, and historicism.” These pages don’t adequately underscore the significance of the discovery upon which historicism is based—that history and philosophy are logically inseparable—but they do offer signposts for further investigation.

Such criticisms cannot obscure the fact that Dictionary of Untranslatables is one of the most solid, wide-ranging, and remarkable books of our time. Very few will ever read it cover to cover, but anyone who dips into it with a little background in the philosophical tradition, and a desire to learn more about what life is actually about, will be rewarded many times over for the effort.