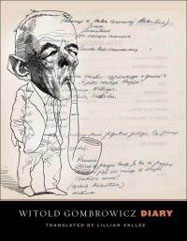 Witold Gombrowicz, a Polish writer who spent most of his adult life in Argentina, escaped the Nazi occupation of Poland and later the Communist regime. John Updike and Milan Kundera hailed him as one of the greatest modern writers; over the past dozen years his reputation has grown in the United States with the publication of new translations of his novels. Like James Joyce and Samuel Beckett (who also happened to be émigrés), Gombrowicz was a master of stream-of-consciousness narration. His fiction may seem in some ways cartoonish, but it is undergirded by a consistent set of themes, particularly his view of the interdependence of youth and maturity. For Gombrowicz, youth is “the only, highest, and absolute value of life . . . If a philosopher says that ‘Man wants to be God,’ then I would add: ‘Man wants to be young.’”

Although Gombrowicz’s reputation is mainly based on his novels and plays, his Diary has also received much critical attention. Written between 1953 and 1969, it originally appeared in serial form in a Polish émigré magazine and was later published in three volumes, which were translated into English by Lillian Vallee. Now Vallee’s translation has been reissued as a single volume. She nicely captures Gombrowicz’s playfulness and satirical wit, but the sparse footnotes accompanying the translation are inadequate; hopefully they will be supplemented in a future edition.

If Gombrowicz were writing today, he almost certainly would publish a blog: his diary mingles confessional writing with polemics and essays on a wide variety of topics, including Polish nationalism, modern literature, classical music, visual art, existentialism, Catholicism, and Marxism. A self-declared provocateur, Gombrowicz makes no effort to censor himself. He dismisses most of his fellow émigré writers, who he feels have grown sterile through lack of contact with their homeland, but he is equally unsparing of writers who remained in Poland. Although he acknowledges the traumatic events Polish writers lived through, he says they have distilled nothing from them: “Proust found more in his cookie, servant, and counts than they found in years of smoking crematoria.”

Gombrowicz’s early years in Argentina were marked by insecurity, partly because he shunned his fellow émigrés but also because of his sexual inclinations. He was attracted to lower-class men—not surprisingly, young ones. Mostly he longed for sailors and other lower-class Argentineans, though he formed some relationships with aspiring writers. His entries about them are reminiscent of Gustave Aschenbach’s febrile longing in Thomas Mann’s Death in Venice: “I acted toward Gize somewhat like an old woman, delighted that his hunger outweighed his revulsion . . . I adored his freshness and he adored what I had made of myself . . . The closer I was to death, the more he adored me, because he saw all the more of my already expiring existence.” On one occasion, he stalks a shoeshine boy at night: “I felt on that empty street that there was no helping it, I had to murder something. I continued to walk, set on committing murder. I had to reduce him to the level of an animal and remain alone in my humanity.” Death and lust, lust and death: the two states are tightly braided together in Gombrowicz’s psyche.

Nothing escapes Gombrowicz’s critical gaze, not even his own diary writing: “I write this diary reluctantly. Its dishonest honesty wearies me. For whom am I writing? If I am writing for myself, then why is it being published? If for the reader, why do I pretend that I am talking to myself? Are you talking to yourself so that others will hear you?” His most straightforward answer is that the diary is a way to revive a stalled literary career: “Three years ago, unfortunately, I broke with pure art, as my kind of art was not the kind that could be cultivated casually, on Sundays or holidays. I began to write this diary for the simple reason of saving myself, in fear of degradation and an ultimate inundation by the waves of a trivial life, which are already up to my neck.”

Gombrowicz doesn’t directly say so, but he seems to have started his diary in response to the publication of Czeslaw Milosz’s book The Captive Mind, which examines the moral conflicts of artists and intellectuals living in Communist states. He admires the book and shares Milosz’s assessment of the “bankruptcy of literature in Poland.” He also sees the potential for wisdom developing from direct experience of totalitarianism. Yet he feels that Milosz’s analysis lacks nuance: “In you, the boundlessness and richness of life are reduced to a few issues, and you use an oversimplified concept of the world, a concept you well know is provisional.”

Milosz’s moral authority and seriousness pose a challenge to Gombrowicz. Elsewhere in the diary, he declares that “a lack of seriousness is just as important to man as seriousness.” If he has stayed out of the fight against Communism, it is because “art must also serve people who have not had their teeth knocked out, their eyes blackened, or their jaws broken.” Gombrowicz doesn’t dismiss political writing, but he’s on another mission: “It would be stupid if I harbored ill feelings toward people who, upon seeing a fire, sound the alarm . . . Yet I am saying: let each person do what he was called to do and what he is capable of doing. Literature of a high caliber must aim high and concern itself chiefly with not allowing anything to impede its range.”

Gombrowicz’s exploration of immaturity led him to create a distinguished body of literature. But as he well recognized, immaturity should not be confused with innocence, and the diary offers many glimpses of his dark side. For example, Gombrowicz writes disparagingly of the renowned Polish writer and artist Bruno Schulz, who died in the Holocaust: “Bruno was a man who was denying himself. I was a man seeking himself. He wanted annihilation. I wanted realization. He was born to be a slave. I was born to be a master. He wanted denigration. I wanted to be ‘above’ and ‘superior to.’ He was of the Jewish race. I was from a family of Polish gentry.” Perhaps Gombrowicz saw a rival in Schulz, whose work was being rediscovered at the time of this entry. But Gombrowicz’s spitefulness toward his dead friend and early supporter is inexcusable, especially when he goes on to declare absurdly, “I hail, as I have said, from the landed gentry, and this is a burden almost equally strong and only a bit less tragic than to have behind one those thousands of years of Jewish banishment.” In such instances, the diary reminds us that when immaturity outlasts youth, the results can be grotesque.