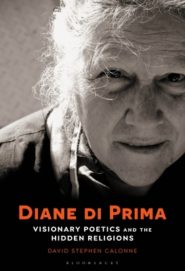 Although an academic study to be sure, David Stephen Calonne’s Diane di Prima: Visionary Poetics and the Hidden Religions serves to highlight an important literary figure whose poetry has been largely sidelined by critical and popular commentary in favor of her sometimes more salacious prose memoirs. It is high time di Prima’s poetic work be afforded greater attention. As a woman who came of age during the American male-privileging hegemony of the 1950s yet found her own path, living on the cultural fringes until the explosive countercultural force of the late 1960s brought a large number of like-minded companions her way, di Prima serves as an admirable model for all artists.

When di Prima found she didn’t belong at Swarthmore College she left for the streets of Manhattan. While she was in part escaping from the strictures of her traditional Italian-American family’s Catholicism, she did so forthrightly, never abandoning core values of compassion for her fellow beings and the earth. She also continued to study the background of the church’s teachings, the heretical and occult texts that Christian scribes had long attempted to discredit and bury away. She found solace and rejoiced in building her own rich community of artists in the city, from fellow poets to artists, dancers, and those involved in avant-garde theatre. Identifying with a burgeoning underground poetry scene, she founded one of the great mimeograph zines of the era, The Floating Bear, with LeRoi Jones (Amiri Baraka), and started Poets Press, publishing her own work along with friends and associates, such as Timothy Leary. She and Jones also became lovers, sparking some of her strongest early poems of love and loss (Jones was married at the time to Hettie Jones). From New York she came West to California in the 1960s, taking part in the various countercultural scenes of the day. Along the way she heavily engaged in meditation, moving from Zen to Tibetan Buddhism, as well as exploring tantric, tarot, shamanic, and various so-called pagan spiritual practices.

As Calonne’s study makes quite evident, throughout her life di Prima has always been writing poetry and gathering an esoteric library which she studied prodigiously. Drawing not only upon di Prima’s larger publications, such as the essential gathering Selected Poems, 1956-1975 (North Atlantic Books, 1975) as well as her epic of woman-identified poetics Loba (Penguin Books, 1978), Calonne also covers the many smaller press editions of her work, such as her self-published Calculus of Variation, and frequently cites unpublished material from archival holdings of her papers and personal notebooks. There doesn’t appear to be any of di Prima’s writings that Calonne doesn’t at least touch upon within his commentary. That said, there is a dizzying sort of madness to the speed at which Calonne swoops from reference to reference. For much of the book it feels as if he is so busy assembling his original sources that he glosses over his arguments. The abundance of his citations are quite fruitful for further reading but his own work feels less than fully rewarding.

What is made definitively clear by Calonne’s study is that there are many more publications by and about di Prima yet to come. Calonne has done a fine job delimiting areas of her work where arcane and occult source materials play a vital role. He also emphasizes her teaching and lectures, primarily at the now defunct New College of California’s Poetics Program in San Francisco and the annual summer Buddhist/Beat gatherings at Naropa University in Boulder. A collection of di Prima’s lectures and lecture notes is clearly a project needing an editor. Her lecture “Light/ and Keats” has long been readily available in Talking Poetics from Naropa Institute (Shambhala, 1979), but aside from her also excellent pieces on Charles Olson and “R. D’s H.D.” available in the Lost & Found chapbook series, little else from her archival teaching materials has been brought into publication. In addition, a full biography would flesh out the scholarly digging performed by Calonne, since he only draws upon written source material; he conducted no in-person interviews with the poet or any of her family, friends, and associates.

There are also the many small press publications of di Prima’s work to be gathered together and published anew. The 1990 City Lights collection Pieces of a Song: Selected Poems is far too thin a collection, especially when compared to North Atlantic’s expansive earlier Selected—which itself would be well worth republishing. Any such projects would, of course, require di Prima’s cooperation, but there should be no doubt that future di Prima publications are necessary. Her work is fundamental to recovering poetry’s essential interplay with every aspect of our lives.

Click here to purchase the paperback of this book (avail. July 2020)
at your local independent bookstore