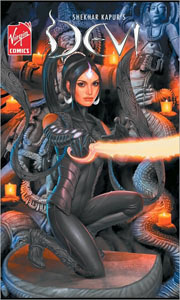 While Hinduism has a multiplicity of specific goddesses, they are all manifestations of a larger notion called Devi, the Sanskrit term for Goddess. Among the most venerated aspects of Devi is Durga, created to battle a demon undefeatable by the gods and thus equipped with more power than the male pantheon. Durga, unlike her unkempt fellow goddess Kali, is as beautiful as she is deadly, often riding ladylike, sidesaddle, into battle. In some variants of her mythology, she is explicitly seductive, using her own nudity— even the exposure of her genitalia— to distract and thus slay the demon, while in other variants she doesn’t even slay him, merely conquers his demonic nature and takes him as a lover.

Such rich mythical tradition, thick with ambiguity and deep reflections of our human fears and fantasies, is unfortunately absent from the ongoing comic book Devi, now collected in four volumes from Virgin Comics. Emerging as a collaboration between billionaire Richard Branson, filmmaker Shekhar Kapur (Elizabeth, Bandit Queen), celebrity self-help guru Deepak Chopra (Golf for Enlightenment, Ask the Kabala), his son Gotham Chopra, and entrepreneurs Suresh Seetharaman and Sharad Devarajan, Virgin Comics was created as a bid to tap both the Asian market and Asian talent— to “redefine the Indian entertainment industry” by encouraging engagement between writers, artists, and filmmakers over the classical tropes and images of Indian culture. Titles such as Shekhar Kapur’s Devi, Shekhar Kapur’s Snake Woman, The Sadhu, Ramayan 3392 AD, and India Authentic exemplify both the clever business tactics and intriguing artistic concepts behind this program. 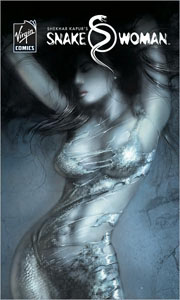 Some of Virgin’s titles are quite strong: Shakhar Kapur’s Snake Woman, for example, adapts a loose collection of myths and folktales about Nagas (snake people), mining their Freudian resonance with sexuality and sexual fears. Writer Zeb Wells weaves this all into a compelling tale of occult intrigue placed in contemporary Los Angeles but with roots in the pillaging of the East India Company. Other titles are less successful: the awkwardly titled Ramayan 3392 AD draws inspiration from epic poetry that details Rama’s attempts to recapture his wife Sita from a demon, but Chopra and Kapur’s version suffers from what reads like an unfamiliarity with the complexity (and tragedy) of the familiar tale—not to mention a willful ignoring of the role the Ramayana has recently played in justifying horrific mob violence by Hindu nationalists. (That a demon suicide bomber declares “God is great” before detonating will surely be read as a reference to the very Muslim citizens these lynch mobs have targeted). 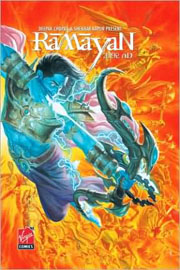 But if, beyond any instance of political or even religious use, great myths have something in common, it is their compellingly human portraits, the intimacy and authenticity with which they explore our weaknesses and our resiliency, our contradictions and passions. Here is where Devi fails most spectacularly, in part because there are clear gestures at an attempt. For inexplicable reasons, gorgeous and kind young Tara Mehta is cohabitating with a particularly broad-chested Indian gangster in the invented city of Sitapur, where giant ruins meld with contemporary architecture. Mehta has been targeted, however, by a dagger-wielding, saffron-robed sect, intent on kidnapping her and using her body for a ritual that involves possession by the Goddess. While goddess possession is a fairly standard religious event in Hinduism, these baddies have something else in mind. Suffice to say, the ritual goes sour, as do the various sinister plots afoot. Instead of being sacrificed, Mehta becomes fused (old school fashion— think the professor/student mind meld of the old Justice League Firestorm) with a particularly limited example of “divine consciousness.”

The Devi in question doesn’t know what a birth certificate is, nor electromagnetism, yet she comes with a variety of powers, handed down by a decidedly non-Hindu pantheon. There is Mars, god of war; Kama, the Hindu deity of love; Death, personified; “Interface,” a sort of cosmic consultant; the generic chief of the pantheon, a bearded “all-father,” “sky-emperor”; Ra, the solar god of Egypt; and “Kapital,” who assures the new semi-deity super-heroine, “Let’$ not forget that your project i$, fundamentally, a re$ource optimization problem like any other. A$ an effective benefactor, I must make $ure that your initial endowment$, at lea$t, are abundant.” This may be meant as a double-entendre about Mehta’s super-heroic breasts—this particular Devi is, after all, a “leather-clad superbabe,” accompanied on adventures by an alcoholic policeman and stalked by a clawed female assassin in even more outrageously tight clothes. Unlisted among her new powers is the handy fact that the skirt of her outfit varies in length, allowing artists to offer views, when appropriate, of the leather-clad orbs of her ass. 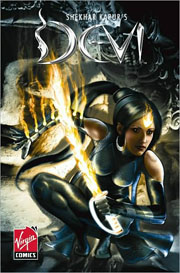 Yet apart from a tendency toward curves and cheesecake poses, the art is as unremarkable as the writing. Volumes 3 and 4, scripted by Saurav Mohapatra and drawn by Saumin Patel, Edison George, Siddharth Kotian, and (for Volume 4) Chandrashekhar A., offer a more realistic view of India than the earlier volumes, giving us at least moments and details reflecting real observation (the cup of creased napkins on the restaurant table, the bucket in the shower, one authentically overpopulated street scene). The dominant tendency (perhaps motivated by plot) is toward recyclable settings; an expansive abandoned dock figures centrally, presumably because, with its emptiness and measured grid of bricks, it seems designed for large-scale, Devi-on-demon smackdown.

It’s tempting to dismiss the series as so many silly plot lines and so much rehashing of clichés, except that Devi’s presentation of sexuality and violence is not as innocent as its random inclusion of a robotic dog or its penchant for routine resurrections. In his introduction to Volume 3, Kapur writes that he “was fascinated by the representation of the female energy in our mythology as complete opposites . . . the Avenger and the Nurturer.” This is one of the central religious paradoxes, usually read as pointing to the insufficiency of human metaphors (language and thought in general) to comprehend the divine. Allah, in the Qur’an, is likewise all-merciful and an avenger, the maternal creator and ultimate judge. But Kapur is not interested in reading Devi theology as theology; he’s interested, as he admits, in “the psychology of the modern male” (obviously his assumed audience for these comics).

The average male, Kapur claims, “desires both” forms of the feminine “and is reviled for that dual desire.” On the one hand, such a man suffers from “the absolute need to put the female that he loves… on a pedestal.” He compares this aspect with the Virgin Mary, in part because he wants to make a pun on the idea of sins, since “sins” in this case are precisely “those deep dark desires of mad sexuality with the very idol of his worship. The search for the object of intense sexuality. The schizophrenia of separation of the same object. To worship and to ravage. To separate and then to find union through an act that is mad, passionate and sometimes violent.” Such rehashing of the old Freudian desire for the virgin and the whore is entirely unrelated to the theological paradox Kapur has identified in Devi imagery: the ferocious Kali, for instance, her tongue dripping blood, is a loving mother figure as well as a warrior against evil. But Kali’s feminine energy is never whorish, nor is the Goddess imagined as manifesting the spectrum of “sexual energy” Kapur claims to be pursuing with this comic, running between “the nurturing kind” to “the flirtatious and outrageous kind.” 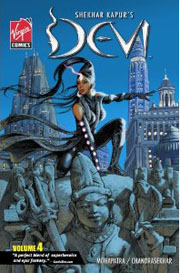 So, apart from gestures or trappings of religiosity, Devi is interested in sex, in the conflicting desire that guides the male gaze. We, Kapur declares, want a Tara Mehta who is good with children, handing out cricket supplies to neighborhood kids. But we want her to wear a dress that barely covers her pubis while she does so. We want her to be a nice, charitable person, willing to wait alone in a club for her boyfriend to show up, but we also want evidence that she’s a freak behind closed doors, hence her cohabitation with said boyfriend, and hence said boyfriend’s being a vicious killer solidly twice her size. And what does this desire demand of a woman who’s turned super-powered? The same thing, it seems, as it demands of the ladies of World Wrestling Entertainment: conflict with larger and larger men, more and more fierce and ferocious women, abject violence, and bondage postures. The “we” assumed by Kapur’s psychology may be divided about punching our own female acquaintances in the nose, but “we” thrill to see it in living color on a comic panel. Likewise with seeing Devi lifted up, writhing, with pulsating tentacles tightening around her leather-clad body, strangling her unconscious.

If all this seems like standard comic book chauvinism or sexual fetish, consider again the claim that, withDevi, a new collaboration of artists and writers sought to “redefine the Indian entertainment industry.” Perhaps it would be useful to consider, too, the extended all-village gang rape scene in Kapur’s Bandit Queen (another story about a woman who becomes, or at least is believed to be, a manifestation of Devi). When the film debuted two decades ago in India, crowds protested its sexual explicitness (in a culture where on-screen kisses were still taboo), but crowds (of men) also lined up for blocks to see and be titillated by it. While Indian society has, without a doubt, changed in remarkable ways, it was only eight years ago that groups of Hindus, inspired by Hindu nationalist rhetoric, launched lynch mobs against their Muslim neighbors in Gujarat. As Martha Nussbaum has recently detailed in The Clash Within: Democracy, Religious Violence, and India’s Future (Belknap Press/Harvard, 2007), this wasn’t merely violence, it was sexualized violence; women were gang raped and then, literally, raped to death, metal objects inserted deep in their vaginas. It is not a stretch to see an echo here of Kapur’s musings on male psychology, and it is not enough— nor can it ever be enough— simply to assent to such psychological realities as unchangeable.

In this light, it is hard to see Devi as harmless eye candy. Rather, the rich tradition of goddess worship and goddess mythology has here been twisted into soft-core pornography for sale to a new generation of Indian and international males. It may “redefine the Indian entertainment industry,” but it’s the oldest marketing trick in the book.