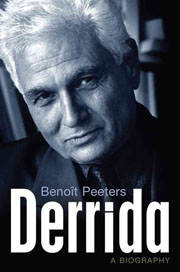 In Derrida, the 2002 documentary film devoted to the famed philosopher, he insists that “someone who reads a tiny paragraph and interprets it in a rigorous, inventive, and powerfully discerning fashion” is “more of a real biographer than one who knows the whole [life] story.” Such a remark from the often-autobiographical Derrida must have given Benoît Peteers pause. Perhaps that is why he prefers to open with Derrida’s insistence in a late interview that “you must . . . put philosophers’ biographies back in the picture.” Not that Peeters offers the picture Derrida perhaps had in mind, being quick to disabuse us of any misplaced expectations. “In this book, I will not be seeking to provide an introduction to the philosophy of Jacques Derrida, let alone a new interpretation of a work whose breadth and richness will continue to defy commentators for years to come. But I would like to present the biography of a philosophy at least as much as the story of an individual.” In the 629 pages that follow, the individual is more clearly discernible than the philosophy.

Avoiding as much as possible the sort of biography described by the British writer William Boyd as “a fiction conceived within the bounds of the observable facts,” Peeters leans heavily on the careful, chronological arrangement of an extraordinary amount of material gathered from the published record, as well as on Derrida’s archives (manuscripts, correspondence, seminar notes, and so forth) and several dozen interviews with family members and friends, teaching colleagues and former students, true believers and sparring partners. His account, boasts Peeters, “has refused to exclude anything” and parcels out Derrida’s seventy-four years into thirty-two chapters, beginning with the childhood of little Jackie, an Algerian Jew subject to French colonial rule, continuing through Derrida’s anxious, faltering education and eventual triumph as world-famous intellectual, the globe-trotting rock star of deconstruction, and closing with the philosopher battling pancreatic cancer and dying after lapsing into a coma, having asked “not to be buried too quickly so as to give resurrection a chance.”

Peeters’s prose, judged here via Andrew Brown’s translation, is clear, unadorned, and unpretentious; it is rarely stylish and generally utilitarian. Nevertheless, the abundance of direct quotations, especially of Derrida, combined with the intrinsic interest of many of the events narrated and the skill with which Peeters teases out traits of character, yield a life story that proves engaging if sometimes wearisome: so many books written, lectures delivered, seminars conducted, friends cheered or consoled; so many administrative chores undertaken, world crises addressed, barricades stormed. Derrida is also, I should add, at times quite moving. Peeters wishes us to understand the importance of young Jackie’s encounters with anti-Semitism and wants us to see that the brilliant enthraller of the world’s intelligentsia was once an insecure student for whom exams were “terrifying ordeals” and who remained throughout his life riddled by self-doubt, depression, and conundrum. We revisit the stories of Derrida’s arrest in Prague on bogus charges of drug trafficking and his unwavering defense of beleaguered friends (Paul de Man, Louis Althusser), glimpse his sometimes lackluster parenting and uncover the complications of a love affair and the child Derrida never knew, learn that he loved to swim and watch “bad soap operas.”

In the single chapter that abandons chronology, a small masterpiece of portraiture is achieved through a collage of charming trivia ranging from the answers Derrida once supplied to a questionnaire (“Favorite hero in a novel: Bartleby. Your favorite heroine in real life: I’m keeping that a secret”) to his skill as a driver and taste in clothes. Indeed, whether through excerpts from published texts, snippets of personal letters, or the recollection of close friends, the Derrida assembled here is a complicated, conscientious, generous, troubled, immensely likeable man, an obsessed workaholic whose fondest dream was “to leave traces in the history of the French language” and who claimed that he knew he wrote too much but defended himself by explaining, “I can’t help it. It’s my way of fighting against death.” It is difficult not to like and admire a man who, friends report, was found near the end of his life, ill with the effects of chemotherapy and barely able to write, “typing detailed reports on the papers of . . . students that continued to be sent to him.” It is difficult not to be charmed by one of philosophy’s most challenging thinkers when, two weeks before he died, he could remark to a friend so simply, “when I arrive in front of Saint Peter, this is what I’ll tell him: ‘I’m really sorry’ and ‘the landscapes are lovely.’”

As for Peeters’s desire to write “the biography of a philosophy,” the results here are less satisfying. Derrida wrote a lot—between 1986 and his death in 2004, his books appeared at the rate of two a year—and many are notoriously difficult. To expect a full unpacking would be unreasonable. What the reader mostly learns concerns the circumstances that motivated and gave shape and purpose to each text, the difficulties encountered in completing the task, the niceties of its publication, and the responses it elicited. Consequently, Derrida’s controversial importance remains insisted upon more than demonstrated. Still, enough gets quoted, described, and plotted on the map of Derrida’s evolving concerns to suggest the contour of his thought and to arouse or renew one’s curiosity and prompt a (re)turn to the books themselves.

Written for a French readership, Derrida may prove occasionally insufficient to the reader not already hip to the Byzantine nature of the French educational system or whose memory of the Algerian war of independence is hazy. Nor is Peeters invariably trustworthy. When, for instance, he tells us that Yale was “the cradle of the New Criticism, the dominant current [of literary criticism] from the 1920s to the beginning of the 1960s,” he is wrong regarding both place and dates. And as Peeters warned us, anyone hoping for clear definitions of Derridean terminology or instructions for performing a deconstruction is well advised to look elsewhere.

Complaints registered, I wish to underscore the service Peeters has performed: he has rendered Derrida approachable if not entirely graspable. As Louis Althusser, the great Marxist philosopher, wrote to Derrida in the early 1970s, praising him for getting “in ahead” of everyone else: “we’ll catch up,” but “only to discover that you’ve moved on.” With Derrida, we can at least visit some of the places Derrida once was, and some of the places that—thanks to him and marked by him—we have since desired to go.