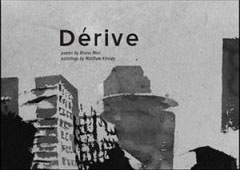 In the essay “Theory of the Dérive,” Situationist International founder Guy Debord defines a basic situationist practice: “the dérive (literally: ‘drifting’) [is] a technique of rapid passage through varied ambiances. Dérives involve playful-constructive behavior and awareness of psychogeographical effects, and are quite different from the classic notions of journey or stroll.” In Dérive, Bruna Mori drifts through the varied ambiances of New York City and lyrically maps the city’s “psychogeographical” contours.

The first section of Dérive presents “an assemblage of interwoven images of Manhattan’s Chinatown, maintaining the lines as they were collected, alluding to one’s experience as imposed upon a neighborhood, as well as the city’s imposition upon an individual.” Mori’s poems embody the “rapid passage” of collecting and assembling her sensory experience of the city.

The poem “Rushing” exemplifies the sense of passage:

Under a temple, I seek refuge from neon lights flashing, good luck braided into door frames, inverted wet paint signs, stairs I can’t descend. Lampposts feed skies at twilight. You are the unexpected angle that intersects me and the camera. Shadows no longer fall on fingers but that of my body across. Yellow nightness. Again the skittish cat with yellow eyes, and Chinatown in yellow and red screams even at night. Girls raise arms for a cab, raise T-shirts encircling bellies, raise bellies.

Returning to Debord’s essay, we read: “the spatial field of a dérive may be precisely delimited or vague, depending on whether the goal is to study a terrain or to emotionally disorient oneself. It should not be forgotten that these two aspects of dérives overlap.” Throughout Dérive, we witness the spatial field shift from delimited to vague as the motive of the poet shifts from orientation to disorientation. In an untitled series of poems, Mori crafts character studies of people she meets on her dérive:

hsien ju does not pray because he finds
enough luck at the local mah-jongg hall.
[…]
hsien lights incense and a
few bills for the ghosts of his ancestors,
so they too may gamble in heaven.

These tenderly constructed portraits create an ethnographic intimacy that deepens objective observation. Mori suggests that a city isn’t only a swirling carnival, but also a collection of individuals and individual stories.

The last section of Dérive involves Mori’s “outward engagement in the boroughs.” These poems are “based on riding subway trains to the end of each line and disembarking to lose [her] way among new immigrant communities, ‘70s-era public housing, halfway houses, and cemeteries.” Mori’s willingness to disorient herself transforms what could be banal “city poems” into “psychogeographical articulations,” as in this one about the Brooklyn neighborhood of Bay Ridge:

Colon, rectal, and gastroenterology clinics intermingle with air force recruitment centers. I am ineffectually looking for evidence of Italy or Greece in remnants of Easter bunnies, folds of American flags. Tulips of sameness, columns of similarities each possessing their own fractures sprout from oil of calzones and gold chain links. A waitress sucks the tips of her glasses to “Hungry Like the Wolf”.

Debord posits that the architecture of urbanism consists of “different unities of atmospheres and of dwellings […] surrounded by more or less extended and indistinct bordering regions.” As Mori “ineffectually [looked] for evidence,” she discovered a city haunted by its bordering regions. Debord explains this transformation: “The most general change that dérive experience leads to proposing is the constant diminution of these border regions, up to the point of their complete suppression.” Like the last sentence in “Bay Ridge (Brooklyn),” Mori shows us how the dérive blurs the border between “poethnographer” and the “poethnographic subject.”

Amidst the dérive poems, there are a few poems in this collection that drift from the subject of the city. The most powerful example is “After Affect”:

There is fire in the sun.
There is not much sun.

The reality boat of sediment
Dances on my infirm sleep.

There is fire in the sun,
I will visit its citizens.

Mori created these poems through homophonic translations of the Argentinean poet Alejandra Pizarnik’s Textos Selectos. At first, the different tone of the translations seems to interrupt the overall project of the book. However, Mori maybe is suggesting that homophonic translation represents a kind of textual dérive. Unlike other homophonic translations, which translate line by line, Mori translates at unexpected angles. For example, the quoted section from “After Affect” above comes from Pizarnik’s “La Jaula.” Mori translates the first two lines, “Afuera hay sol,” then skips several lines ahead to “barcos sedientos de realidad bailan conmigo […] a mis sueños enfermos” ("The reality boat of sediment / Dances on my infirm sleep”). Mori drifts through Pizarnik’s “psychogeographical contours” to carve out a situation for poetry. In the spirit of the dérive, Mori then incorporates lines from a different Pizarnik poem—the next two stanzas of “After Affect” translate the 7th section of “Arbol De Diana.”

Mori treats Pizarnik’s Textos Selectos as an opportunity for a dérive, following variable sensorial paths to “the end of each line.” Although I’m not thoroughly convinced that these poems necessarily heighten our reading of the city, they definitely add another “bordering region” from which to represent the violent re-shaping of post 9/11 New York (we can read Mori’s other homophonic translation in Tergiversation, a free e-book from Ahadada Books).

Reading Dérive teaches us what Debord articulates as the lessons of drifting: “The lessons drawn from dérives enable us to draw up the first surveys of the psychogeographical articulations of a modern city. Beyond the discovery of unities of ambiance, of their main components and their spatial localization, one comes to perceive their principal axes of passage, their exits and their defenses. One arrives at the central hypothesis of the existence of psychogeographical pivot points.” Throughout Dérive, Mori presents what she perceives as the city’s “principal axes of passage, their exits and their defenses.” She’s attentive to the city in regard “to its own [dis]orientation, a certain proprioception.” Complementing Mori’s poems, Matthew Kinney’s ink paintings of the city create striking visual “pivot points” on which the book turns. In the end, Dérive doesn’t attempt to precisely delineate a stable map of the city; instead, Mori and Kinney manage to lyrically translate the changing architecture and vibrant humanity of urbanism through “poethnographic” techniques.