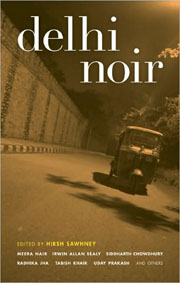 Delhi should provide a rich setting for noir fiction. It’s one of the world’s largest cities, the capital of a nation marked by a spectacular gulf between its rich (or merely middle class) and its multitudes of poor citizens. It’s not hard to draw contrasts. In the reception rooms of Delhi’s luxury hotels, gilded men and women sip on bottles of water that cost more than their waiters will earn in a day. Modest householders employ two or three domestic servants and look to upgrade to a foreign car or plasma television. Meanwhile, the capital’s slums burgeon with migrants from the other India—the impoverished villages, the teeming plains, the areas that Aravind Adiga, amongst others, has called “the darkness.”

Delhi is growing fast, because the migrant influx is limitless. Immediately to its east is Uttar Pradesh, a state roughly the size of Minnesota, but home to 190 million people (standing alone, it would be the world’s fifth most populous country). Ninety million more live in Bihar, the next state over, in an area a little smaller than Kentucky. Some of those people are desperate, and many of the industrialists and politicians at the top will take advantage. Labor and lives are cheapened, and corruption abounds. Add a police force notorious for its brutality (despite its slogan, “With you, for You, Always”—the title of the first section of this anthology), a prolific and sensational press, unlimited Afghan heroin, and appalling levels of rape and murder, and there’s abundant material for noir literature.

So it comes as something of a surprise when Hirsh Sawhney, the editor of this entrant in Akashic’s series of noir anthologies, notes in his introduction that few writers have set crime fiction in Delhi, as opposed to Bombay or Calcutta (which are both less violent cities). Sawhney blames the gap on the timidity of “Delhi’s book-buying-and-publishing citizens”: they derive too great a benefit from their unjust social order, Sawhney claims, to risk examining it closely. This seems a dubious assertion, given that Delhiites have an insatiable appetite for lurid journalism (media “stings,” where undercover reporters expose official corruption, are especially popular). And of course, one need not live in Delhi to buy a book that’s set there, just as one need not live in Bombay to read Vikram Chandra. But whatever the reason for the dearth of Delhi crime stories, this anthology provides the beginnings of a remedy. A diverse collection of writers, few of whom readers in this country will have already encountered, portray the seedier sides of life in India’s capital. Their stories are noir, but they’re also news.

The best fiction in the book is both vicious and poignant. In Uday Prakash’s “The Walls of Delhi,” the only piece translated from Hindi (the rest were written in English), a janitor, Ramnivas, discovers an enormous cache of bills while cleaning an exclusive health club. Instantly, the life of this slumdweller—whose first child died from eating fish caught in the sewer—is transformed. He can buy ice cream for his remaining children, meat and eggs for his dinner, furniture and appliances for his home, a trip to Agra to see the Taj Mahal with his mistress. It’s not a happy story, though. A Chekhovian fatalism underlies the narrative; from the outset we understand that it won’t end well. In this case, the culprit is whiskey, along with that crushing social order that consigned Ramnivas to the slums in the first place. Now that he can afford to drink, he drinks too much. A pair of opportunistic police officers, recognizing that Ramnivas shouldn’t be the type to have money, turn up at his Agra hotel room for a shakedown. They order butter chicken and a bottle of Royal Challenge on Ramnivas’s tab, while the janitor’s underage girlfriend whimpers in the corner. After downing a few shots, Ramnivas gives up his secret. The police steal what’s left of the money and take care of the unfortunate Ramnivas too. In a concluding irony, the narrator, another poor man from the neighborhood, sees Ramnivas’s story not as a cautionary tale, but an exemplary one: at least Ramnivas escaped—however briefly—the walls of his own existence. “It doesn’t matter how many weeks or months or years I’ve got left in this sorry life before I also disappear,” writes the narrator, “but I, too, would like to enter into a world of my dreams, just as Ramnivas did.”

Another highlight is Nalinaksha Bhattacharya’s “Hissing Cobras.” The story takes place in the same drab housing colony in which its author, according to his contributor’s note, has lived for twenty years. The authenticity of the setting is palpable. When Raghav Bakshi, another corrupt police inspector and the story’s antihero, “looked at the shit-yellow two-story government quarters surrounding a bald patch of land that was meant to be developed as a park,” a tract that “was now deserted except for a couple of stringy goats grazing in a corner where there were still a few clumps of grass leftover from the previous monsoon,” can we infer some underlying authorial affection beneath the tart description? The writer certainly has a light touch. His jolly police inspector, a man less interested in solving crimes than in liquor, kebabs, and robust Punjabi housewives, is so happy with his lot that one is at first inclined to forgive him his petty extortions and casual sadism. But when Inspector Bakshi’s inquiry into the death of an elderly woman centers on a compromised daughter-in-law and takes on a more predatory cast, we remember exactly what’s at stake when those who enjoy a little authority want something from those who have none. By the story’s close, Bhattacharya has revealed himself to be a moralist, albeit a sly one.

There are other memorable pieces in the anthology. In Mohan Sikka’s “The Railway Aunty,” an orphaned young man from the provinces discovers that some of his relatives live a little differently in the capital. He seems to be a quick enough study, until he’s blindsided by a stunning series of betrayals. The young man is not solely a victim though. By the end, he’s uncovered a hidden and dangerous capacity of his own. If there are no good cops in this book, there are a handful of clear-eyed (though inevitably wounded) journalists. Hirsh Sawhney and Tabish Khair provide a couple of convincing exemplars. And Palash Krishna Mehrotra gives us something else entirely. His protagonist is an underground man, a Delhi stranger; the story unfolds after he has perpetrated a senseless crime. He’s a man without illusions about his own decency, or that of the society in which he lives.

A few stories are less successful. Hartosh Singh Bal’s effort suffers from the woodenness of more formulaic detective fiction, while Omair Ahmad abandons plausibility when his characters deliver potted accounts of Delhi’s recent history—would a seasoned private investigator really need her client to tell her that Indira Ghandi was a prime minister of India, or that there were violent reprisals against Delhi’s Sikh community after her bodyguards assassinated her? But these are minor objections. Overall, Delhi Noir is an invigorating and often moving collection. And amidst all that violence and depravity, readers might detect some undertones of optimism, thanks to the muckraking journalists who inhabit many of these stories. Their city may suffer from institutional corruption and systemic inequality, but it’s also awash in newspapers. In Delhi, writers matter, and the contributors to this volume know it.