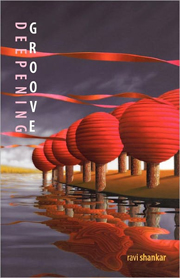 Ravi Shankar’s Deepening Groove reminds us that, “the more things change, the more they stay the same” . . . and that, of this notion, we are propagators of and victims both. Shankar’s poems are richly imbued with the simultaneous sensations of stasis and timelessness. We are reminded at once of our daily lives, of the history of those lives, and of the history of those whose lives we have followed. Deepening Groove is both map and legend, both fortune and ledger.

The title of the book is itself a reminder of the past and of the way forward. Deepening Groove, like a well-worn groove in a dirt path, elicits images of harder times, personally and evolutionarily, as well as our desire to put these times behind us. However, each moment we look back, the way to where we are is always the same and the grooves just that much deeper. We, much like the buzzards, wild turkeys, gators, and armadillos that inhabit Shankar’s collection, are indebted to ritual, inheritance, and instinct: our lives are as indebted to prehistory as are those of the creatures around us. This idea of inheritance and ritual is captured well in the poem “Primitives”:

Recall
that clusters of bird bones found buried with relics
are those of Gallus gallus—the domestic chicken.
Trace a chain of Y-chromosomes from the Upper
Paleolithic imagination to the rock walls scarred
with petroglyphs & handprints. To poems.

Though Shankar insists there is danger in reliving the historical trajectory of our lives, he simultaneously suggests that in reliving our lives we can best know ourselves. It is in this trajectory where honesty and perspective, necessary components of our humanity, are earned. The poems in Deepening Groove work ably to suspend the reader at this threshold of time, all at once looking back and gazing forward intently: “Suspended in this ephemeral moment / after leaving a forest, before entering / a field, the nature of reality is revealed.”

Shankar’s poems are subtle, often leaning on the Latin, and sometimes obsolete, roots of words to give rise to images and ideas that demand we honor their appropriated anachronistic use. Protandric, caruncles, mephitis, achondroplastic, all pull us through the grooves, all ask us to consider both their origins and the origins of that which they modify: oyster, wild turkey, skunk, armadillo.

Even the repeating form of most of the poems in this collection, four tercets of unchanging, uncompromising language, is a reminder of the deepening grooves, where each new poem inherits the form of the one before. But, like every evolutionary twist, every so often a new piece breaks form to give us hope of survival from “the human need to reenact / primal dramas / even when the act perpetuates a cycle of abuse,” and reminds us “that new forms can emerge to contradict the / suggestion / that survival is impossible without repetition.” (These lines, perhaps tellingly, are from “Plumbing the Deepening Groove,” the poem from which the book gleans its title.)

Ravi Shankar’s poems are, without question, powerful works of art, demanding our immediate attention.Deepening Groove is a book that serves well both to mark our time and light the way ahead.