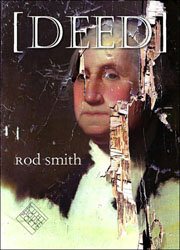 From his editorship of the journal Aerial to the dozens of titles released by his press Edge Books, from numerous readings organized in the D.C. area to his management of Bridge Street Books and its standing as having one of the nation’s best poetry selections, Rod Smith has for two decades been a singular, sustaining force in innovative poetry circles. It is no wonder that the work collected in his latest book—his fourth full-length collection—has been circulating for years in one form or another and has already garnered a small body of critical response. Deed is a dynamic, stunning, smart, and hilarious book, and one destined to reach beyond the coterie of initiates who’ve been following his writing all along.

For those not yet initiated to the pleasures of Smith’s poetry, suffice it to say that a Smith poem might contain at once the variousness of O’Hara, the conviction of Oppen, the insistence of Stein, the speed of Tom Raworth, the wit of Kevin Davies, as well as the ideas and actions of thinkers like Debord, Chomsky, Cage, Duchamp, and Wittgenstein. It’s not that his work is merely an amalgam of these folks; rather, it is enlivened by and tinged with an understanding of the specifics behind how each of them has worked out in a unique way the problems they have encountered, created, and surmounted as writers.

Thus Smith’s Deed is the latest stop along the ongoing, expansionist railway of American innovative poetry. That the tracks lead both forward and back is a given; that this particular station offers a respite which will undoubtedly determine future routes is a joy. Originally titled The Good House & Other Poems, Deed is divided into four sections: “The Good House,” a 40-page tour-de-force serial poem; “The Spider Poems,” a wacky, shorter sequence; “The Given,” a sort of new and selected grouping of singular works; and the Spicerian send-up “Homage to Homage to Creeley,” also a serial work.

The book’s first and longest poem, “The Good House,” is an expansive lyric exploration of the idea of a house, of what it does, what it is, how we enter and interact with it, how we experience it, and how it shapes and houses that experience. Before it opens, one encounters two short, untitled introductory poems, the first of which begins innocuously enough with an egret ruminating on what a house might be: “the egret says / the house, it is something to eat or sunlight, the egret / thinks, the house, it wills, is a subcanvas I can scribble.” Up to this point one reads the egret as an exterior consciousness, as something outside of the sweeping mediation that will follow. The egret gives us perspective. What do the physiological, economic, or domestic conditions of housing matter to a bird? But in characteristic Smith aplomb, the poem is quickly launched into a twisting complex of exchanges and skewed logic “the egret moves / or is awake, loving the familiar solution of loving, this explains / the egret to the egret in the house / to the house & sunlight, we become intelligible because the egret / says elliptical.” So much for perspective! Now it seems the inclusive pronoun has trapped even the reader in this systemic intertwining. Not to worry, as the sequence which follows builds from the ground up a place where one might recognize both the comforts and conundrums of a house, of housing, of architecture’s ability to save us.

Gaston Bachelard opens The Poetics of Space by asking a question which encapsulates the work’s overarching concern: “Transcending our memories of all the houses in which we have found shelter, above and beyond all the houses we have dreamed we lived in, can we isolate an intimate, concrete essence that would be a justification of the uncommon value of all of our images of protected intimacy?” Smith offers up this essence in the form of a fluctuating sequence of lyric passages, a series of stills and bits of narrative movement that dance around definitions to create something part cubist portrait, part action painting, and part improvisatory free jazz equivalent of a particular house that is at once all houses. Like Dickinson’s “What I can do—I will—,” Smith activates the potential and imaginative power of a deliberate choice of action that is also one of probability, intention, and even uncertainty. “The Good House” is everywhere beholden to the will. It is “in being, the house we will,” and “is where we will.” It “brace[s] / the heart’s chosen will,” and gives us “the will / whether human, nascent, or / lathered.” And while “the house seems / to be a verb though it dislikes / the term ‘housing’,” “there it is, & will / be, 'til it was.”

Smith’s poem teeters between notions of agency. Is it the house that wills us into being? Is it we who will allow it to do so? Will it shelter us, as Bachelard argues, from the Heideggerian anxiety of being thrown into the world? Although the questions begin to trail the reader throughout the poem, Smith is always quick to dispel them before they are fully formed: “It does not matter if we trust / the house. Because I am the one / speaking right now I can say / we. Therefore I think, to the / degree that you can, you should / trust me.” And trust we do, since even if “anything can be made out of a house,” and “the good house / summers on Long Island, reads / Debord, & rests / like a scythe,” Smith warns us against the default allegorical interpretation: “If the house is just poetry / we’re in trouble.” Such trouble is hastened by the return of the egrets in one of the poem’s closing volleys. What are we to make of these birds who “are wise / & do not fail to understand,” when their wisdom remains a thing remote, a thing removed from the house, from what Bachelard calls “our images of protected intimacy”?

That final phrase, “protected intimacy,” is echoed and altered in the title of Smith’s earlier book, Protective Immediacy, pointing toward one of the most intriguing facets of his work: the ability to display a deep erudition, an understanding and engagement with the world of ideas, while also being playful, having fun in exposing the fragility of the authoritative statement, no matter how well articulated it may have been. There is something of the spirit of the Shakespearean fool in Smith. When we laugh while reading his work, which happens often, it belies something more troubling, even ominous. Thus Smith’s work is political, but not didactically so, as his poems point out our follies without swelling with the stuff of trumpeting polemic.

For example, in its entirety, the poem “Barnes & Chernobyl” reads: “It’s got everything you need // It’s an artist // It don’t look back.” The title itself is a humorous yet haunting conflation of the ubiquitous chain store Barnes & Noble and the city that suffered one of the worst nuclear disasters. So one might read the poem as a comment on rampant consumerism, on its steamrollering homogeneity, and the inevitable cultural devastation left in its wake. The machine of capital will never become a pillar of salt. Such a reading, however, is made all the more complex when one realizes that the poem is riffing on the opening lines of Bob Dylan’s “She Belongs to Me.” Although the song pays homage to an artist’s autonomy, one can rest assured that Barnes & Noble has sold innumerable shrink-wrapped copies of the CD on which it appears. What does it mean when the revolutionary impulse enters the marketplace? The poem doesn’t answer the question, but it does seem to ask it, however askance and slyly, all the while wearing a knowing grin, and dancing à la Emma Goldman to the background music.

After all, maybe in the act of writing poems, no matter how relevant, timely, or topical they might be, we remove ourselves so far from the near insurmountable problems of the real that we become an embodiment of Smith’s “Poem”: “sacred // dumb guys // standing in the fake world // flipping out.” Of course, Smith gives us one quite tangible answer to such anxiety in the book’s final poem, “pour le CGT”: “We work too hard. // We’re too tired // To fall in love. // Therefore we must // Overthrow the government.” Although that final line carries a shock in its surprising directness, and demonstrates Smith’s mastery of Jack Benny-like timing, he’s not kidding.

This unexpected directness makes for some of the book’s most memorable moments. “Ted’s Head” is perhaps its best known work, having already appeared in Smith’s last book, a few anthologies, a CD, and a handful of journals; and rightfully so, as it’s a funny, poignant, biting poem, a poem which, through the clarity of anecdote, allows its final zinger of a sentence to force one into a serious reconsideration of all that had come before:

So there’s this episode of Mary Tyler Moore where Ted’s trying to get a raise & after finagling and shenaniganizing he puts one over on Lou & gets his contract changed to non-exclusive sos he can do commercials which is not cool w/Lou & the gang because Ted’s just a brainless gimp & it hurts the image of the news to have the anchorman selling tomato slicers & dogfood so Lou gets despondent because the contract can’t be rescinded but then he gets mad & calls Ted into his office & says, “You’re going to stop doing commercials, Ted” & Ted says “why would I do that Lou?” & Lou says “Because if you don’t I’ll punch your face out” & Ted says “I’ll have you arrested” & Lou says “It’ll be too late, your face will be broken, you’re not gonna get too many commercials with a broken face now are you Ted?” & Ted buckles under to force & everybody’s happy, except Ted but he’s so dumb nobody cares & everybody loves it that Lou’s not despondent anymore he’s back to his brustling chubby loud loveable whiskey-drinking football-loving ways. Now imagine if Ted were Lou, if Ted were the boss. You know how incredibly fucking brainless Ted is, but let’s imagine he understands & is willing to use force. That’s the situation we’re now in as Americans.

Smith’s stripped-down, Nicanor Parra-like antipoem is only one of the many modes he employs. We’re just as likely to find a zany, sound-driven poem dipping in and out of referential language, a breathless, dense prose work, or an angular, speedy lyric. One thing is certain in all of his writing: for as much as he’s willing to mock, parody, and pull the rug out from under poetic conventions, whether those of romanticism or current experimental practices, it’s always done with a deep respect and understanding, an irreverence which is somehow reverent and celebratory. Our neo-situationist, sub-modern spokesperson has in Deed given us a document of empowering, risky, and lasting work, an engaging testament to the complexities and contradictions of our current moment, and one of the few formal contracts worthy of everyone’s signature.