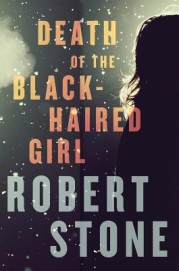 Since his debut novel A Hall of Mirrors in 1967, Robert Stone has exhibited a penchant for presenting characters living under various state of duress. Dog Soldiers, which won the National Book Award in 1975, dealt with Californians whose lives had been turned upside down by the Vietnam War and the roiling sense of vertigo that was the hallmark of the ’60s American home front. Amidst settings as different as Central America in A Flag for Sunrise (1981), the open ocean in Outerbridge Reach (1992), or modern Jerusalem in Damascus Gate (1998), Stone has made a marked study of what it is to live under pressure.

His latest novel, Death of the Black-Haired Girl, would, at the outset, seem relatively bucolic, being centered around a New England college town. Likewise, the main plot device involving a student-faculty love affair might seem rather hemmed in for Stone. But even here, amidst leafy academe, Stone creates a distinctly American setting that is teetering on a precipice of madness and violence.

In Stone’s work the influences of the past are never far from present. Perhaps recalling West Rock in New Haven, a landmark clearly visible from the Yale University campus where Stone was once a writer in residence, he writes of a “high ridge that showed seasons to the grimy town. . . . God had raised the ridge centuries before to protect the colony and the college from the pagan and papist savages on the other side. The college had always required and received protection.” This notion of a protecting God infuses Stone’s novel with a sense of faith, however battered, as the action unfolds.

Stone’s fictional town is still reeling, in many ways, from the turmoil of the 1960s. In the spirit of the times, the college had once opened its doors to the community, only to pull a hasty retreat. “What ensued, drug-wise, crime-wise and in terms of bitterness between the college and the town, was brief but ugly. The opening forth was followed by a locking up, down and sideways that had locksmiths laboring day and night, and now there were three or four doors for everything . . .”

Professor Steven Brookman enjoys the comforts of the Persian carpet, ancient desk, and leaded Tudor windows of his office. But glancing outside his office window he often sees evidence, in the familiar figure of a troubled local resident burdened with plastic bags, that all is not entirely well within or without the stone gates of the campus. A certain uneasiness grips Brookman as he watches the familiar sight:

Sometimes he walked silently, eyes fixed on the pavement. At other times he carried on a dialogue with the unseen, an exchange that sounded so nuanced and literate that new students and faculty thought he was addressing them or talking into a cell phone. Occasionally he grew angry and shouted a bit, but like many of the delusional, he had learned not to confront real people who—downtown—could prove all too substantial.

The local coffee shop, located in a former office building near the campus that has become a halfway house for mental patients, bears the scars of civic decay and an air of edginess hovers as students and faculty sip their espresso. The “housies,” as the students refer to them, have made the shop their headquarters, and “their behavior and queer psychic emanations gave the coffee shop an unsettling spin.”

It is within this charged atmosphere that Brookman has conducted an affair with a beautiful and rash student, Maud Stack, the daughter of a former New York City police officer. Brookman has decided to end his affair with Maud upon learning his wife is pregnant, but it is clear that he has always been of two minds concerning his young lover. “Even on days when he was not particularly in the mood for Maud, he would take up one of her essays with a stirring of anticipation not untouched by dread. Dread of her winning her way inside him again, of threatening to crowd out the contoured life he had made himself, the devotions and sacred loyalties within it.” Brookman has even mulled over the thought of changing his lock to his office.

Brookman is intrigued that Maud, a spoiled college girl in his eyes, has noted a particularly dour sentiment while studying Christopher Marlowe’s “Doctor Faustus” in one of Brookman’s classes. “The passage that had caught her attention was the one in which the Doctor asks Mephistopheles how he manages to wander about tempting obsessed intellectuals while doing time in hell. ‘Why this is hell,’ says the Diabolus, ‘nor am I out of it.’” And indeed, it is clear that Brookman and the others populate a certain kind of hell of their own that soon threatens to overwhelm them.

As the title of the novel portends, all does not end well for Maud. An editor of the college newspaper, Maud has taken offense to anti-abortion protestors outside the campus gates and has written a scathing attack piece on them which has garnered her some notoriety and scorn. At the same time Brookman breaks off their affair and soon after is confronted by a drunken Maud in front of his campus house; as a crowd leaves a nearby hockey game, a number of pedestrians mill around to witness Maud loudly berating Brookman, his wife looking on from their doorstep. When Maud is suddenly killed by a speeding car, however, it is unclear how she came to be in its path. What transpires from then on is pure Stone country, as the seemingly predestined fates of his characters play out before them amidst an atmosphere of impending violence and retribution, where any remnants of a fading faith are sorely tested.

Eddie Stack, Maud’s father, is sent reeling from the news of his daughter’s death. As a police officer he had been a responder at the World Trade Center disaster and had been privy to dread crimes that had been committed at the site. He now sees himself as “a burnout and a drunk, not even a mediocre policeman, a lousy one in fact, and not a particularly honest one. A coward, morally and sometimes physically. . . . An accessory to sometimes vicious things and to crimes he lacked the stones to perpetrate or prevent.” Stack blames Brookman for his daughter’s death and plans revenge, but even before this tragedy Stack knew he was a man “poisoned by anger long before he had any right to it. It must be in his blood, he thought, the anger.”

Jo Carr, a campus counselor who had seen Maud the night she died, is an ex-nun who had previously worked in South America. She attempts to console Maud’s father, but also tries to steer him away from confronting Brookman. But Carr, who recalls another ex-nun in Stone’s A Flag for Sunrise, has weathered her own wars and bears her own scars. “In South America, at close quarters, she had seen a struggle toward mutual extermination so savage, fueled by such violent hatred between races and classes, that the very phrase ‘civil war’ seemed an ironic euphemism.”

Brookman proves quite resourceful and is ready for whatever Stack may have in mind for him. He sees in his predicament that “there was some kind of blood debt, something to be endured as a result of what had happened.” And quite like Stack, Brookman is also consumed by “an ancient anger he had been born with, an insatiable rage against himself, his cast of mind—a sense that he had been born out of line, raised wrong, lived deserving of some unknowable retribution that it was his duty to honor and face down, prevent, overcome.”

In the novels of Robert Stone nothing is free and there are always consequences down the line, debts demanding payment. Both Brookman and Stack realize this—indeed, Maud seems, in the end, to have been attracted to a man in Brookman not at all unlike her father. Stack, in words that could have easily come from Brookman’s character, reflects: “No one and nothing was free, everything rigorously bound and priced, locked down and chained, from your last drink to your last orgasm to what you thought were the highest flights of your soul.”

Hovering over this book is a lingering religious faith, particularly of Catholic dogma that is either stridently defended or abruptly shunted aside. God’s presence, or lack thereof, is pondered over incessantly—although, as the title of an earlier short story by Stone puts it, “An Absence of Mercy” is perhaps the true worry here. In Death of the Black-Haired Girl, Stone has once again painted a picture of an extremely unforgiving world, where a bad end is as likely as any other.