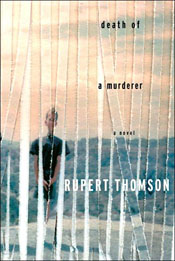 The title is not a spoiler, nor is it a tease. Rather, like the title of Rupert Thomson’s previous novel, Divided Kingdom, it declares a matter of fact, behind which storylines sprout, self-delusions fester, and interpretations tangle with ambiguities; the reader is encouraged to think up questions of ethics, politics, identity, and rhetoric in the spaces between. An earlier Thomson novel, The Book of Revelation, has a title that could describe them all, each narrative sprung tight with slow-burn surprises, each book an exquisite leak. Death of a Murderer leaks a little bit predictably, and its surprises are a little quick to burn out—perhaps resulting from the novel’s tight focus. Thomson is a writer of vision and imagination, but he has hobbled himself here, and deliberately so— interesting to watch, but difficult to embrace, producing, as it does, a minor novel by a major novelist.

The eponymous murderer, though carefully unnamed throughout the book, corresponds closely to the real-life Myra Hindley, who died during a life sentence in prison after co-conspiring to kill children. The protagonist of the novel is Billy Tyler, an unambitious cop called to a simple duty: to sit in the morgue and make sure the corpse of the killer remains undisturbed through the night. Her death, in life as in Thomson’s fiction, was big news, and the shot of her mug on front pages and TV screens across the nation inspired nightmares and cries of retribution. In the public mind she was more witch than woman, a monster who had gotten off too easy with three decades in prison, a demon that deserved to be stoned by villagers or burned at the stake, her crimes inconceivable to anyone with even a hint of a soul.

Some writers might use the story of Myra Hindley to weave a fairy tale of good and evil, and others might use it to suggest that, buried in the least civilized corners of our selves, we all have the capacity to commit such crimes. Thomson is up to something similar, but more complex. There is, indeed, the hint that we’ve all got a bit of Myra tucked behind our better days, and some of the characters, in moments of duress and for selfish reasons, even wish for the death of a child. But not in the random way of Myra Hindley, who, with her partner in crime, killed because killing was the fun for the day. Other characters hurt children, but the children live and become adults. (In Thomson’s world, the single precondition of adulthood is familiarity with many kinds of hurt.) As Billy Tyler sits with the body of the murderer—refrigerated and locked out of sight—he thinks back through his life, and we learn that he’s hardly perfect, but he’s no Myra Hindley. He’s been violent and irrational, lost and lonely, susceptible to the wiles of a manipulator, tempted by power, blinded by anger. He’s human, not a monster.

By slowly and methodically peeling back the protective shells around the lives of the people Billy Tyler knows, Thomson reveals his characters as flawed and pained and sometimes reprehensible, but he’s careful never to equate their crimes with those of a woman who helped kill random children. As the night progresses, Billy encounters Myra’s ghost, or his hallucination of her ghost, and she’s no more able to explain herself than anybody else is. Crimes so often remain mysterious even to the people who commit them. That, ultimately, is what Billy and the other people in his life have in common with the most extraordinary and horrifying criminals—they know that, despite whatever stories they tell and whatever causes they strap to effects, something inscrutable remains in every mistake and transgression.

The Neo-classical limit on setting and time in Death of a Murderer should produce tension and drama, but it mostly fails to do so, because Thomson’s novel is more concerned with the slow unraveling of the details of Billy’s life—a life that is surprisingly schematic, seemingly designed to offer points and counterpoints. The narrative reaches out toward everyone who remembers the murderer and her crimes, and now and then Billy wonders a bit what caused the fascination with her abominations, but Thomson’s attempt to be universal—to let his version of Myra Hindley be a nameless stand-in for every banality of evil that ever got groupies—creates an icon more dissipated than haunting. Or maybe the problem is just that the nameless murderer, the freeze-dried corpse, is still more interesting in the shadows she casts than Billy, the patient man of muddled darkness and drab light. It’s a sad fact of fiction, and maybe of life, that evil upstages everything less than itself.