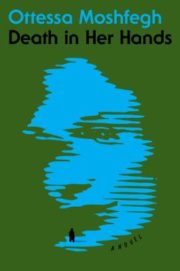 Once again masterfully setting the innocuous and the poisonous side by side, Ottessa Moshfegh offers a slow burn thriller with her fourth book, Death in Her Hands. Seventy-two-year-old Vesta Gul is walking in the woods near her new home with her beloved dog Charlie when she encounters a note, pinned to the forest floor by black rocks, which states, “Her name was Magda. Nobody will ever know who killed her. It wasn’t me. Here is her dead body.” “But there was no body. No bloodstain,” Vesta observes; “No tangle of hair caught on the coarse fallen branches, no red wool scarf damp with morning dew festooned across the bushes. There was just the note on the ground, rustling at my feet in the soft May wind.” When the darkest place is inside your mind, the scariest sound the beating of your own heart, the most threatening vision in the mirror, you know you are in a Moshfegh story.

Initially, Vesta is shocked by this development in her quiet life—then amused, then fixated. Recently widowed, Vesta packed up her stuffed house in Monolith with relief less than one year ago and moved thousands of miles east to a rustic cabin in the town of Levant, which she views as “blue collar and dull.” “I felt I needed to hide a little. My mind needed a smaller world to roam,” she says. Before the note, Vesta’s solitary days followed a similar pattern: “Each day I wrote out what I’d do, and each day I usually abandoned my plan halfway through. Walk. Breakfast. Garden. Lunch. Boat. Hammock. Wine. Puzzle. Bath. Dinner. Read. Bed.” Now, she feels the pull of purpose. She revels in her mysterious nightmares of who Magda and her murderer might be. “It would take a wise mind to do Magda’s story real justice. Death was hard to look at, after all,” Vesta admits.

After musing on the possibilities, Vesta moves on to Google searches at the local library and worries what will happen if she is caught by the police for not reporting the evidence. She argues frequently in her head with her late husband, Walter, who was logical to a fault and could be stifling. “But one needed to consider all possibilities. I felt very smart indeed. You see, Vesta, I told myself. In just two seconds flat you eliminated a suspect: the man who works in the back room at the library. And you didn’t even have to question him. You can solve the mystery with little more than your own mind.”

Readers will fret as Vesta embraces paranoia and wobbles along the edges of sanity. She is aware that her imagination is running with this, but is willing to be submerged, to drown in her obsession: “Suspicion invites danger, doesn’t it? Keep the imagination soft and happy, and only good things will come. If there was somebody lurking out there in the woods, it was only Magda. And she was dead.” In a way it is comforting to Vesta, seeing the scars of her past before her and messages bubbling up from every corner, even The Collected Works of William Blake—and she attempts control by whittling her life down further and further.

Eerie, elaborate, absurd, and profound, Moshfegh’s novel about a dangerously porous woman will plunge you into dark humor and intrigue. Readers will never tire of her portraits of haunted interior lives, detailed with the most fragile brush strokes.