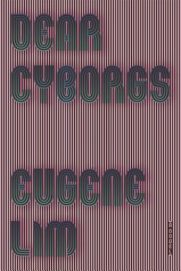 Despite the suggestively sci-fi title, Eugene Lim’s Dear Cyborgs is not a futuristic picaresque about sentimental robots. Rather, it’s about artists and poets and painters, and the glimmers of compassion found between these individuals and their pursuits; it’s also about superheroes, holograms, detectives, and sentient search engines. Which is to say: this book sets out to defy categorization, and it thoroughly succeeds. A wild and wildly intelligent work, Dear Cyborgs skillfully employs elements of essay, noir, fantasy, and pop in order to question the limitations of identity in the Internet age.

While that description might conjure bombast, for the most part this is a quiet novel concerned with a group of talkative young artists in Chicago. The scenes in the book describe idle hours at karaoke bars and diners in which the characters take turns musing at length about geekdom, fine arts, literary theory, diaspora, and most crucially, political activism. The fact that they happen to be a crime-fighting supergroup called “Team Chaos” comes as a surprise, toward the end of the third chapter:

Even though she works as a social worker and even though she’d rather be a poet and a painter, Muriel is actually a foundling extraterrestrial sent from a far superior civilization. She can fly, walk through walls, and shoot powerful beams from the palms of her hands. . . . I’m a mere Earthling and therefore far less inherently powerful, but I’ve mastered various physical disciplines and martial arts as well as having proven myself in battle with a certain technical wiliness, which seems to impress. Despite these accomplishments, as you no doubt will notice, I tend to be depressed and anxious much of the time.

This is the first unrealistic detail in Dear Cyborgs, and it plays no role in the arc of the chapter. Other details of this sort pepper the novel throughout, in hints dropped mid-sentence or buried in asides. Lim occasionally indulges his nods to the fantastical later in the book, devoting a short chapter to the pursuit of Team Chaos’ arch nemesis, Ms. Mistletoe—but when Ms. Mistletoe is cornered, instead of a battle scene we get to listen to her recount the events that let up to the dissolution of her marriage, a tame and thoughtful soliloquy on her dissatisfaction with the daily grind.

These subdued blockbuster-esque details effectively defamiliarize the otherwise mundane conversations and armchair philosophies of the characters. It’s an off-kilter slant that pervades the book, and it fissures the narrative in a calculated way. Dear Cyborgs, like many experimental novels, is not a story about what it’s about as much as it is about how it’s told. Nearly every chapter utilizes a narrative frame. We rarely see direct action on the page; instead, characters tell stories or recall memories as they sit in a booth or walk home from the bar. They do not act—they think, or they speak.

Frame narratives are nothing new, but Lim’s persistence with the device colors his topic of choice: namely, multiplicity of identity. This can be seen with Muriel, who is both an artist and a super-powered alien (though we never do see her powers in action), and with how our narrator’s day-job as a martial-arts expert government operative coincides with his true passion of drawing comics. These overt dual identities are reinforced by each narrative frame: whenever a character tells a story about himself or herself, that character exists simultaneously as the narrator and as the protagonist.

Multiplicity of identity is positioned as a strength in Dear Cyborgs, but a dangerous one. The strongest character is the evil Ms. Mistletoe (is she evil? Readers will sympathize with her thoughtful explications on protest movements, support of workers’ rights, and desire to inspire others to improve their living conditions; it is curious that she is the target of our protagonists’ ire). Yet we never meet Ms. Mistletoe directly—in fact, we often encounter her through multiple frames. Her first appearance, for instance, is via a memory of the narrator’s. In the memory, the narrator watches a hologram of Ms. Mistletoe (that’s two degrees of separation), and the speech had been prerecorded (three degrees). The content of Ms. Mistletoe’s speech, which is presented in full, is a recollection (four degrees) of a conversation between her and her friends after the initial protests in Zucotti Park—a conversation included as dialogue in a scene (five degrees).

Examining the details of Ms. Mistletoe’s speech through the lens of Lin’s framing technique provides the clearest sense of his motivations. Musing on the purpose of Occupy Wall Street, Ms. Mistletoe says,

The theory at work here suggests commercial oppression is a by-product of multiple simultaneous identities. How else would we explain people repeatedly voting against their self-interests? Lim’s book suggests that those who control technology use it in order to manipulate us into complacency, but not through propaganda or marketing—rather, through the psychological refraction that technology represents. “Divide and conquer” does not only apply to groups of people: it applies also to individuals.

If Dear Cyborgs makes a claim as to what’s at stake when we give our memories, knowledge, and problem solving skills, over to the Internet, it is this: the splintering of identity has led to our complacency. Our arch nemesis is our own conscience, losing its foothold due to click bait and constantly updated feeds. Lim’s narrator warns,

(Some seem unaccepting of this transformation, and it indeed has been gradual. In a sense it began when the first simple machines were invented. But now, to deny the change requires a willful ignorance since, if you observe bodies clothed in steel flowing over highways, or how we’ve outsourced half our memory to these devices, these exobrains we carry around, and if you note how even our most intimate relationships occur remotely, at great distances from one another, if you see all this, well, it isn’t such an original observation, dear cyborgs, to say that human and machine long ago merged inextricably.)

The cyborg state is upon us, we are inured to it, and our identities will never be the same. Only time will tell how well we will navigate our many lives in the Internet age.