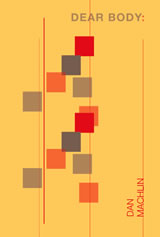 Through missives dotted with lackadaisical phrases as well as more abstract convictions, Dan Machlin has written a book where the overall integrity is nested in the form itself, an epistolary certainty that this “cluster bomb of a man” can deliver a sustained and unified self (“Letter 1”).

The epistolary form itself is an important element to the book; Machlin couches all of his lyric utterances in the context of being addressed. Beyond that, the mixing of distinct registers within these communiqués keeps the reader constantly alert. There is a linguistic fuzziness to some of the work—not that the referents are confused, but that it seems, at times, as if the consciousness of the poem is unsure of what it wants to say, is still finding its sense. Take these lines from “Letter in which it is Explained”:

We were always speaking so small it snowed
I thought or the occult of
having each of us in this place.

There is definitely a procession to the logic here, but it is frustrated by the fact that it doesn’t quite add up. These moments, though, of quiet yet dazzling mystery coupled with an oddly confident progression, are part of what helps the reader construct a unified sense of Machlin’s overall project.

Another key is in the constant questioning that serves as the ostensible base for many of the poems. “Letter 2” begins:

So far in this insignificance I can’t say how I left you. How I felt the last dance
of a pulse—a cloud and—as a cliché mid-sentence—proverbial stuttering.

Here we have the same type of diction already noted; the first sentence offers a kind of bombastic statement that ends in muted defeat and leaves us without any real intellectual grasp of its meaning. But the trajectory of this poem reveals something deeper, as we find on arriving at the last lines:

Lately I have been feeling estranged from you again. Doubtful
you ever existed.

Leaving aside the larger (and here completely unimportant) concern of whether “you” is a real person, the overall dynamic of loss and uncertainty helps further define Machlin’s purpose.

Dear Body: is a rich book. There is real pleasure in reading the poems (see the inclusive virtuosity of “Fifth Letter” and the counter-intuitive beauty of “Waste Stream”), but there is also the greater challenge inherent in ascertaining whether we are more than the sum of the parts we can easily name and tabulate. As Machlin writes in “Fifth Letter”, “No we were not just pleasant beings gazing into the sun.” This book is offered as evidence to our complexity.