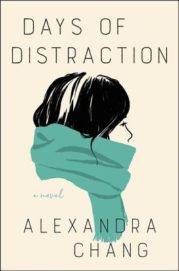 It’s 2013. Zhang Jing researches, pitches, and submits a review of Sheryl Sandberg’s neo-feminist tome, Lean In. A male editor mauls it, demolishing the nuance of Jing’s review, which she finds published the next day under a simpering title without ever getting her approval. Instead of a thoughtful examination of feminism-gone-corporate, Jing’s work has been reduced to one-note clickbait—and the raise she “leaned in” to ask for months ago has yet to materialize. Lonesome little ironies like this one characterize Jing’s experience as a woman, as a writer, as a daughter, and as a Chinese-American.

Days of Distraction follows Alexandra Chang’s protagonist across the country from her tech journalist job on the West Coast to Ithaca, New York, where her boyfriend J is starting a PhD program at Cornell University. Though journalism does not exactly make her heart sing, Jing is a habitual researcher, hunting for affirmation or red flags in 19th-century news articles, urban dictionary web pages, Pew studies, and the FAQ section of OkCupid.

A glance at the author bio and a serious moment three-quarters through the novel, when J drops the affectionate “Jing Jing” and addresses the narrator as “Alexandra,” reveal that Chang didn’t mine only the internet or The New York Times for her material. Days of Distraction is autofiction, and it honors the genre with a steely self-awareness and a hard look at self-consciousness itself. Jing is willing to consider alternative explanations, to challenge her own perceptions, yet the insistent sexist and racist barriers she cannot stop encountering refuse to evaporate with an attitude adjustment.

Even as she notices how much of her experience goes unnoticed, Jing is refreshingly forthcoming about her own failures of attention. She realizes that she has been mistakenly referring to J’s laboratory work as “eye stuff” when he has actually been studying the genetics that predispose people to strokes. She scoffs at his family’s long-winded attempts to provide directions and dismisses J when he notes that they don’t all have smartphones equipped with Google Maps. On a visit to see her father in China, she describes herself primarily as exhausted by him. She documents her addiction to her phone, and all of the false realities inside it. Jing hopes to be understood without always seeking to understand, but her process of doing so firmly asserts her voice while enmeshing it in the thoughtful context of constant research and moments of unaffected tenderness.

Much of the novel tracks the progression of Jing’s self-concept when she follows her boyfriend across the country (after extensively Googling “trailing spouse”). She is not happy, but she wasn’t exactly happy before. She feels alone, but doesn’t know if she feels alone because she is not white and everyone in Ithaca is, or because she is not white and J is, or because J is always at the lab, or because her job is not satisfying, or because her family is far away, or . . . Much of this pain goes into challenging the limitations of her interracial relationship. And yet, the book always retains its three dimensions, and the beloved tedium of her shared life with a California white boy suffuses the novel with much of its firmest, fullest detail—the rituals of cooking, texting, driving, being. Despite the depictions of those critical gaps in understanding inherent in any heterosexual and especially any interracial relationship, Chang can’t help but make J the most endearing character in the book, loving him onto the page.

Days of Distraction is for anyone who needs a companion story to sit with their experience of being a person of color, or of being a woman, or of being a woman of color. This is also exactly the kind of reading that male and particularly not-white people need to undertake—it spotlights the ways in which one’s ethnicity or gender is inflated in its omnipresence and yet compressed into an archetype in almost every interaction. Jing mulls over an uncomfortable conversation with an overeager white woman: “She didn’t mean anything by it. . . . What does this mean, then?”

Chang’s book is ultimately a deeply comforting one because her protagonist is so often both disappointed and disappointing. It honors dissatisfaction, distraction, and distancing oneself from one’s own life and the characters in it—as well as holding them all inside as treasures, “preciously familiar, like a memory come alive.”