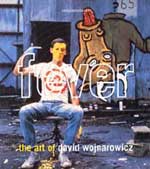 From his first gallery exhibition in 1980 to his death in 1992, David Wojnarowicz blazed a trail in the art world that continues to invite commentary. In a decade dominated by obfuscatory Reaganist politics he was the anti-Reagan, his work either parodying American economic imperialism or lamenting the concurrent erosion of our social consciousness. That he could do this without a shred of political correctness revealed him to be an artist of true vision rather than a simple reactionary, and it is one reason among many that his work outlives its biographical origins.

These origins are repeated like mantras in nearly every assessment of Wojnarowicz. Abused by his parents, he survived as a runaway on the streets of New York, making money as a male prostitute. One of his paying lovers encouraged his artwork, giving him crucial support at a crucial time; a subsequent mentorship by photographer Peter Hujar cemented his sense of himself as an artist. His career runs synchronous with the AIDS crisis, and watching friends and lovers fall ill and die, hearing politicians spew homophobic venom, and eventually testing HIV positive himself, all become intricately woven into his creative output.

Yet this tight web of correspondences ultimately does little to communicate the import of Wojnarowicz's art. For that, we need the art itself, and it is amply presented in Fever: The Art of David Wojnarowicz. Published in association with a retrospective held this year at the New Museum of Contemporary Art in New York, Fever shows the myriad tributaries that fed Wojnarowicz's work. Intuiting that gay life within a post-industrial culture was twice-removed from the mainstream's falsely mediated picture of reality, Wojnarowicz developed a strategy of confronting the viewer with this realization. It is at first gentle, even humorous—as in the 1979 Arthur Rimbaud in New York series, 24 photographs in which Wojnarowicz's lover, wearing an eerily flat mask of the iconic poet, is depicted in various locations (on a subway, at Coney Island, shooting up on a pier) as if haunting this contemporary wasteland. In subsequent paintings, sculptures, and collages (often using maps and money), the symbolism is heightened, creating disturbing muralistic images that seem to contain violent prophecies. In later work, such as the infamous Sex Series, grainy backdrops, newspaper reports, and telescoped scenes reveal the outside and the inside all at once, a new kind of X-ray in which vision has so thoroughly seen reality that it is impossible to ignore.

Fever thus documents Wojnarowicz like never before, constructing a sense of wholeness around the artist's rather disparate output. This is especially difficult because Wojnarowicz worked in so many different media and often at the same time, yet Fever shows us a man with a mission no matter what the methods used. His lesser known sculpture and installation work are revealed to complement his more recognizable paintings and photographs, and all the artwork is presented nonchronologically, enhancing the portrait of a unified artistic vision (even while it hides the developmental stages in the artist's career). The book also includes samples of Wojnarowicz's published writings, and four essays in this book discuss the power of Wojnarowicz's vision from slightly different angles, each concluding that ultimately this work speaks loudly and strongly about things which are in danger of being passed over in silence. While all four of these essays are insightful introductions, none truly plumbs the depths of the art, especially from a formal perspective—but that simply means that there remains more to discover, and more books to be written, about the achievement of this singular American artist.

One of those hypothetical books might well dwell on Wojnarowicz's writing, and new fodder for such a text has just been added with the publication of In the Shadow of the American Dream: The Diaries of David Wojnarowicz. Editor Amy Scholder acknowledges that selecting from twenty years of personal writing by an avid journal-keeper is an impossible task, quickly noting that others "would make different selections than I did," but she offers here an extremely readable and moving self-portrait. The book begins with a 17-year old loner on an Outward Bound expedition, struggling to understand who he is, and ends with a thirty-seven year old artist who, faced with his imminent death, knows. The journey between, of course, is what makes these journals fascinating.

Diaries, of course, hold the promise of intriguing personal revelations, but since Wojnarowicz's life and sexuality are so radically out in his other work there is little of that here; instead, the process works happily in reverse, showing the inner joys, the struggles beneath the skin, of a life so dominated by surface. One such revelation contained in these pages is that Wojnarowicz conceived of himself as a writer first. While he rarely discusses his visual art in these diaries, they are rife with his love of words: he is hopeful when an editor shows his work to Anne Waldman, delighted to be published alongside Jayne Anne Philips, and passionate about Lawrence Ferlinghetti's poetry. One can hear him, here as in his other published works, assimilating lessons from writers such as Genet and Burroughs, to whom he owes a great deal. Had Wojnarowicz completed the novel he wanted to write, it would probably have led to a fuller understanding of the role writing played in his artwork. As things turned out, the AIDS crisis set Wojnarowicz and his work on a trajectory in which there was little time for fiction.

In the Shadow of the American Dream does contain a wealth of personal recollection, and while Scholder is clearly trying not to intrude on the reading experience, she might have offered more in the way of notes; Wojnarowicz names a panoply of personal referents that might resonate more deeply if we had more information. The book also reproduces a handful of original pages that are doubly illuminating—it seems that Wojnarowicz could not resist making his journals themselves into art objects, incorporating photographs, drawings, quotations, etc.—and as such, I wish this aspect were more present. (Perhaps they even warrant a show, and a facsimile edition might result.) But I set these two small quibbles against the larger pleasure of reading Wojnarowicz's prose. As early as 1971 we see a writer in touch with the rhythms of communication:

We walked up to the freshwater pond and I caught a snake. A little garter snake. He started puking so I tossed him into the bushes. Imagine that, a sick snake.

Later, while in France, his syncopated observations are an image-ridden delight:

. . . shades of Fellini with young painted-face girls in blooming fur coats walking with a waggle of the hips down the sand past old weathered fishermen and couples sleeping curled in the sand before their incredibly long poles stuck down into the beach with lines trailing into invisibility in the surf . . . the water a very strange blue ratty dogs barking from different spots at us . . .

And of course there is the constant evocation of (usually anonymous) sex, in prelude, in medias res, and in joyful aftermath:

I had a head full of things I wanted to say but couldn't. I tied my sneakers and left his apartment, walking down the carpeted stairs past curving walls with green printed paper, old and musty but with a sense of unspoken class . . . and turning a corner to head east and downtown I suddenly smiled, seeing grass stains on my trousers for the first time in years.

Through it all we see a constantly evolving artist at work, one whose goal is simple, or at least simply put: "Delighting as well as shocking that angel within my forehead."

The fact of the matter is that if Wojnarowicz had never created a single art object he would still be a published writer justly praised for his autobiographical texts. Close to the Knives, his "memoir of disintegration," is a masterful rant against the conservative status quo masquerading as memoir, while the monologues that comprise The Waterfront Journals—monologues which, as the diaries tell us, "were not written down with the aid of any tape-recording device but were the bare sections of one-way conversations that I retained in memory till minutes, days, or weeks later when I would write them down in journals and scraps of paper and in letters to friends"—reveal a keen appreciation of voice and character. The conflation of memory and image is all important to Wojnarowicz, one reason why these diaries, like the more crafted stream-of-consciousness of his book Memories That Smell Like Gasoline or the unusual comic book collaboration 7 Miles a Second, are so successful.

It is likewise true, of course, that had Wojnarowicz never written a thing he would still be an artist of enormous power and importance. But the fact that he spoke so eloquently in both these languages should be recognized. Fever and In the Shadow of the American Dream may be the most recent additions to the Wojnarowicz canon, but let us hope that they will not be the last.