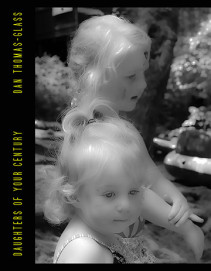 The poems in Dan Thomas-Glass’ first full-length book are formally agile without ever losing their ethical vigor. Ethics are the central concern of his writing and this concern is magnified through the lens of fatherhood, which he seamlessly, though never quietly, incorporates into his lyrical explorations. In this way, Thomas-Glass takes his place beside Farid Matuk (My Daughter La Chola) and Dana Ward (The Crisis of Infinite Worlds) in reinventing the Dad poem, or, as he writes to his daughters: “Kate, Sonia I wanted to write / a poem for you that a mother would write,” not usurping the writing of mothers, but endeavoring to live up to it.

Many great poets offer permissions of various kinds—formal, tonal, thematic—but the permissions offered in this book all boil down to a single affirmation: “Here’s to permission to care, amen.” In this affirmation, permission gives way to its higher calling, mission. It is with great care that Thomas-Glass fords our contemporary world, not side-stepping drones but gathering them up with his daughter’s unicorns and the breakfast cereal, moving forward in the labor of locating “Some honest brightness that could give us form.” This recalls Alice Notley’s great line: “I keep trying to be honest in this glittering wind.” And Notley is no doubt a key spirit of this book, as is Bernadette Mayer, poets who wrote Mom poems the way they wrote (and write) all poems, full of care and outrage and genius.

The contemporary world is fully alive in this book, as it must be. It is the air Thomas-Glass and his daughters share, and nowhere is this more evident than when it’s filled with music. Thomas-Glass’ earlier chapbook, The Great American Beatjack Volume 1 (Perfect Lovers Press, 2012), presented a mash-up of voices, breaking down the invisible line between lyric and lyric as Biggie drops verses on Anne Bradstreet and vice versa. In Daughters of Your Century, lyric becomes the root of conversation: “Sonia wondered if / Frank Ocean means / it when he says / he says I don’t like / you.” He says he says and we wonder about it when he sings. We live in our songs and they bring life to our poems: “In one / now I sang & typed at once— / is that wrong?” Love songs, love poems: “This / is my real love for you / as I lived it, in exactly / these colors.” The heart of this book throbs like a song, past embarrassment and toward a history of feeling; it also provides a fitting soundtrack to parenthood, which is simultaneously ecstasy and heartbreak. We need poems like these. We need them to tell us how we felt, especially in the early days when being too alive obliterates memory, and moments can’t accommodate the onrush and overflow of feeling. In Daughters of Your Century, Thomas-Glass writes against the loss of it, of them, “this small / wild beast, crammed into these moments as / she precisely must be.”

Despite the so-called “cramming” this book actually feels quite airy, with plenty of room for grace and finesse. And despite (or because of) the refrain-like evocations of a dark war bristling with crosshairs and drone strikes, the poems also brim with light and stars. “Light is an intersection / with Sonia shouting to the stars / Are you listening? / Are you listening?” And: “how reaching out we touch a light / that is brighter than the blankest slate.” And speaking of the stars that are us: “They watched / & felt their cores explode / At such impossible hapless grace.” It is a book about the war dead and the newly and dearly alive, presence and absence together leavening belief, allowing all that’s incommensurate and beyond resolve to suffuse the labor of song: