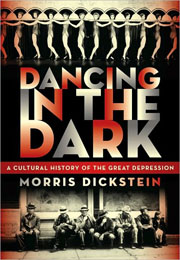 Morris Dickstein’s Dancing in the Dark: A Cultural History of the Great Depression is an extremely timely and fresh study of 1930s literature, film, photography, and music. The book presents a vivid portrait of the era, as illustrated by eyewitness testimony and cultural artifacts. Demonstrating a mastery of his source material, Dickstein persuasively argues that "the arts of the thirties give us a richly subjective understanding of the mind and heart of the Depression" as well as "an incomparable case study of the function of art and media in a time of social crisis."

Dickstein extensively discusses the influences on, and intricacies of, dozens of literary works, including those by John Dos Passos, James Agee, John Steinbeck, Erskine Caldwell, Nathanael West, Richard Wright, Zora Neale Hurston, James T. Farrell, Clifford Odets, and others—works which conveyed several general themes of the era’s high art and popular culture: discovery of the "common man"; loss of faith in capitalism; longing for a grander past or better future; adoption of communist, socialist, or fascist poses; and rejection of the traditional success model that had seduced Americans since colonial times.

Dancing in the Dark will also reawaken interest in writers largely forgotten today, notably Michael Gold, author of Jews Without Money. A discourse on Gold and the “proletarian novel,” which had a brief heyday in the early ’30s, explains how writers returned to sociological subjects explored at the turn of the century by Theodore Dreiser and Stephen Crane, and largely rejected their immediate modernist forbears like James Joyce and Gertrude Stein, who focused obsessively on inner psychology. (Dickstein acknowledges that William Faulkner’s work defies such easy categorization, combining dark psychological insights with devastating social portraits.) Emphasis on social criticism intensified throughout the decade, culminating in Steinbeck’s The Grapes of Wrath, America’s greatest social protest novel.

Dickstein is on less solid footing when describing film. Calling backstage dramas like A Star Is Born cautionary tales about the perils of success is rather self-evident; likewise, it is commonplace to consider gangster movies starring James Cagney, Paul Muni, and Edward G. Robinson as ironic takes on the Horatio Alger myth. The author's commentary on Busby Berkeley dance extravaganzas and screwball comedies like Bringing Up Baby is a bit stronger; not merely fairy tales that charmed economically downtrodden movie audiences, these films were a reaction against "the sense of stasis, the feeling of being bogged down in the intractable," substituting instead "a burst of energy, lightness, and motion. The psychological impact paralleled the morale-boosting effects of the New Deal, the can-do approach taken by FDR."

Despite Dickstein's unremarkable handling of film, Dancing in the Dark remains an engrossing tour de force of criticism, hearkening readers to a not-very-distant time when writers, filmmakers, photographers, and musicians concentrated less on ego and self-expression and more on equality and public spiritedness.