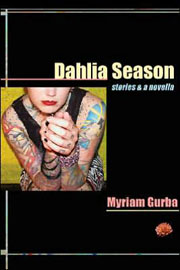 Desiree Garcia remembers 1992 as the Year of the Crazy Girl: while jumbled images of Heidi Fleiss, Lorena Bobbitt, and Amy Fisher were splattered on the television, she painted her nails black, listened to Bauhaus, and resisted urges to jerk and randomly shout “cunt!” Desiree, the off-beat Chicana narrator of Dahlia Season’s title novella, is a goth girl, a budding lesbian, and an obsessive-compulsive with a touch of undiagnosed Tourette’s; she not only struggles with her own fears of being a severely disturbed person, but also has a knack for attracting the mentally unstable. Indeed, crazy girls (and boys) appear throughout Myriam Gurba’s debut story collection, set in early ’90s Southern California.

Herself a former high school misfit, Gurba portrays her characters beyond their yearbook photos. With candid warmth, she seems to flip the pages of memory back to her youth, expertly depicting the desires of two SoCal street gang girls named Angel Malo and La Dreamer. She also deftly describes a Mexican hippie boy with a limp who casts a love spell on his American cousin and a Long Beach girl with a penchant for cross-dressing and gay cruising. Gurba’s characters may be strange, but they never stray into sideshow stereotypes. With honesty and humor, the author creates a believable world of hybrid subculture and youth turmoil.

Dahlia Season is overflowing with teen angst: in “Just Drift,” an indomitable high school student with a scheme to raise his English grade finds himself faced with a pregnant girlfriend; in “Primera Comunión,” a tomboy finds herself condemned by fate (and an overly superstitious family) to be evil. There are girls with first crushes on girls and girls who are cutters in both “White Girl” and the title novella. But what makes these recurrences pleasurable is the sense that Gurba’s characters are operating in the same space. Sisters from “White Girl” reappear in “Dahlia Season” but with different names; Cholo boys from “Just Drift” become pedestrian gangsters in “Primera Comunión.” The Black Dahlia, famous murder victim and flower, appears in both “Cruising” and the title novella as a symbol of dark womanhood.

A highly cohesive collection, Dahlia Season unfurls with a refreshing view of Latina identity; Gurba never shies away from delving into the complexity of modern ethnic American culture. For instance, in the title novella, Desiree’s parents send her to Mexico hoping the trip will instill in her their Hispanic values, but the girl’s dark makeup and witch boots confuse her Mexican relatives. When Desiree returns to the U.S. with a new appreciation (or fetish) for her Mexican heritage, her death-rock friends tease her for braiding her hair and listening to mariachi records.

Just as she portrays Desiree as a cultural hybrid, wearing Christian icons of bloody martyrs and painting her face to look like the DC Comics interpretation of Death, so does Gurba interweave English and Spanish slang, creating a distinct voice with a conversational tone. A feast of life and culture, Dahlia Season may earn Gurba a place on the list of accomplished Latina writers like Julia Alvarez, Christina Garcia, and Sandra Cisneros.