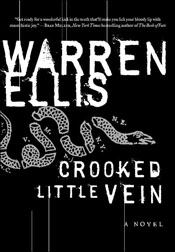 Crooked Little Vein, Warren Ellis’s dark reworking of America, mixes absurd fantasies with real horrors, though his imagery falls short of the nightmarish. Sure, ostrich fetishists are mentioned, and there’s a film screening for enthusiasts of Godzilla bukkake; we hear on the news that a blind man has raped his guide dog, and our heroes sleep (and screw) in a Vegas hotel shaped like Jesus in an Uncle Sam costume. But Ellis takes a sloppy approach to his subject, confusing categories in his catalogue of perversions. A Texas steakhouse that serves raw beef, the filthy rich junky who shoots not only heroin but also a weekly anti-cancer treatment of diluted fecal matter from genetically modified green monkeys, the overbearing mother who gagged her son’s girlfriend to death with the preserved placenta from his birth: these are signs of the time as sure as Ellis’s continuous references to box cutters on airplanes or those conceptual artists (who the main character despises) that work with severed sheep or sharks in tanks.

No wonder Ellis’s bum-luck private dick is so conservative: media-savvy serial killers and transsexuals injecting themselves with silicone are presented as equal measures of the apocalyptic now. “The current government is prosecuting a war in the Middle East that uses torture in the pursuit of securing oil interests,” we’re told at some point by a pansexual hottie whose dalliance with the detective reads embarrassingly like juvenile prurience. Our hero isn’t that political, of course, though he views the war as a quagmire in which American soldiers are confused and uncommitted. Less abstract and far away are scenes like the one where our hero, his scrotum swollen preposterously from a saline injection, seeks succor in his car radio, finding a non-corporate, underground, community station playing live local music full of clatter and twang. As he listens, however, government agents, in cahoots with Clear Channel, raid the studio, arresting the young DJs. “Pirate radio operations have been reclassified as Broadcast Terrorism,” they scream. “You’re going to be wearing dogs in your asses at Abu Ghraib for the next five years, you dirty bastards!”

The icons of our zeitgeist are indeed ugly: the same shellacked grin and vigorous thumbs-up offered by our President, strapped into a ludicrous flight suit and plopped on an aircraft carrier off the coast of California, is aped by Lynndie England and her colleagues, beaming over the shit-stained human pyramids of quivering prisoners they’ve spent their nights arranging. Terror leads to lawlessness leads to torture: the age has made buzzwords of terms like waterboarding and wiretap. Unfortunately, by placing such reality on equal footing with his own cartoonish creations, Ellis diminishes rather than satirizes. What Swift or Burroughs or even Hunter S. Thompson would have amplified, Ellis actually coats over—numbing us, through his fanciful barrage of nonsense, to what’s really going on in our world.

A repeating theme in the book is the idea of fiction placating the public, even being used by the government as a blind: “CIA’s been running Aaron Sorkin for years,” we’re told by an administration official. “He leaks this stuff out under cover of fiction to test the waters.” It seems, however, that Ellis has either not considered how his own fiction fits in with the reality it references, or he simply doesn’t care. Since the author has penned several noteworthy comics and graphic novels—including the widely acclaimed Transmetropolitan and Fell and the tremendously inventive Global Frequency—one can’t read Crooked Little Vein without wondering how the same conceit would have played out in that collaborative format, where the lack of description and flip-book pace would be colored and punctuated by the visual art. As it is, this dialogue-heavy journey isn’t quite worth the trip.