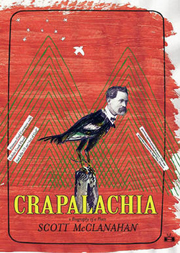 Scott McClanahan’s Crapalachia is a powerful remembrance of the uncles and grandparents who raised him in West Virginia and the friends he ran with. It’s the story of a place that no longer exists and loved ones who all have died or gone away.

The book, as the author points out in the appendix, is a memoir cut with industrial-grade fiction. It’s full of stories about crazy grandmothers and fistfights in junior high; it’s about uncles who drink beer through medical feeding tubes and brag about having balls the size of hog balls. The stories feel epic. They are the kind of tales that warp kids for life—but in a good way. They are about grief and loneliness and love.

I sat in school and I read about how everything changes even in Crapalachia. I read about how the miners became machines, and the loggers became the machines and the tiny roads turned into interstates and the towns became fast food drive thru’s and gas stations and the people became people to serve tourists and let tourists laugh at their accents.

McClanahan’s prose is straightforward, casual, and enjoyable to read, reminiscent at times of Kurt Vonnegut. His use of italics and capital letters can be annoying, but it helps to establish a strong and personable voice. McClanahan isn’t afraid to interrupt his stories to address the reader directly. “Listen,” he’ll say before dropping a bomb on you. And there’s a pleasantly Vonnegut-ian wisdom to the book. McClanahan writes about how, for people who are suffering, life isn’t too short but unbearably long:

The characters in Crapalachia are wild people who have learned to cope with a frightening level of weirdness and mayhem. The narrator’s grandmother Ruby fakes illness and calls an ambulance when she wants attention or a ride to the store for a gallon of milk. A guy named Bill breaks into a house looking for pills and then beats an old woman to death with a block of wood. There’s plenty not to like about these characters, but McClanahan’s stories reveal them with depth and grace:

This is a lie I was told as a child, but it’s still true. The New River is one of the only two rivers that flows directly north. The other one is a river called the Nile. Those rivers are inside of me. I have a river inside my heart. You have a river inside your heart. There are diamonds inside both of us. We are all flowing north.

Crapalachia is one of the rare books that, after you reach the end, you don’t get up to check your e-mail or Facebook or watch TV. You just sit quietly and think about the people of the book and how they remind you of people you used to know. You feel lucky to have known them, and you feel grateful to McClanahan for the reminder.