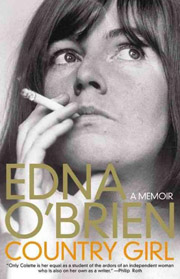 Like a bevy of other Irish writers, Edna O’Brien exiled herself from her native land, clearly unwelcome because of the raw sexuality in her writing. She lived in London for most of her adult life, and it was there that she wrote her first novel, The Country Girls, published in 1960. In her new memoir Country Girl, she describes her desperation to get all she wanted to say onto paper:

The words tumbled out, like the oats on threshing day that tumble down the shaft, the hard pellets of oats funneled into bags and the chaff flying everywhere, getting into the men’s eyes and their having to shout to be heard above the noise of the machine. . . . I cried a lot while writing The Country Girls, but scarcely noticed the tears. Anyhow, they were good tears. They touched on feelings that I did not know I had. Before my eyes, infinitely clear, came that former world in which I believed that our fields and hollows had some old music slumbering in them, centuries old.

This first novel, then, reflected all that the Ireland of O’Brien’s youth meant to her, and perhaps that is why, when she covers the same material in her memoir, the chapters fall a little flat. The story picks up, though, when she elopes with the man who would become her husband and with whom she would bear two children. Unfortunately, it did not take young Edna long to realize that belonging to a husband is no more liberating than belonging to a father—and, if we take O’Brien’s word for it—her husband did indeed insist on owning her. Envious of her literary success, he demanded that she sign every check she received for her work over to him, and when, after years, she one day finally refused, she knew it would be the end of the marriage. The subsequent fight for custody of her children, and her surprising victory, is told in heart-wrenching detail. Although she had her share of loves and lovers, she never married again.

Through the course of her life, O’Brien seemed to know everyone who was anyone. 1960s London after her divorce was particularly stimulating. Her tale of taking LSD under R.D. Laing’s supervision—he left her alone while she was still high, then sent her a hefty bill for his services—catches the mood of the period perfectly. These chapters read like a who’s who of the literary and entertainment worlds: Paul McCartney, Jackie Onassis, Jane Fonda, Roger Vadim, Shirley MacLaine, Richard Burton, and more.

And yet, for all the gossipy details, O’Brien’s tale has a certain restraint: we learn what happened but less of how the author felt about the events she describes. Readers accustomed to the no-holds-barred confessional tone of modern memoirs may find themselves wanting to know more about O’Brien’s inner life. For example, she is at odds with the Catholic Church, mainly because of her sexually explicit writing, but she was raised a Catholic and schooled in a convent. Did she ever struggle to overcome what she had been taught? She describes the outer struggles, but not the inner guilt.

Another example: late in her career, she was in America giving a reading when a listener came up to her afterward and “asked me why I had been so unforgiving of my mother in my fiction, and lo, the glass of red wine literally floated out of my hand . . . I can still see the little crimson puddle on a white rug. A message from beyond.” We infer that the subject is still raw for O’Brien, that her love for her mother and subsequent alienation from her are still unresolved. But we want to know how O’Brien lives with, or tries to reconcile, those two aspects of her relationship with her mother.

The closing chapters of Country Girl reflect the way we think of older people’s thought process, looping in and out of the present as various scenes and events recall those from the long ago past. And the final chapter, in which O’Brien returns to visit her childhood home, now in ruins, is the perfect ending to this tale of a woman who has lived life on her own terms, loving and writing about love in prose that has rarely been equaled.