Join us as best-selling novelist and internationally renowned digital rights advocate Cory Doctorow presents his first graphic novel, In Real Life. This graphic novel tackles the problematic issue of “gold farming” in the video game universe, through a riveting story featuring a young female protagonist named Anda. With gorgeous artwork by cartoonist Jen Wang, In Real Life is a perceptive and high-stakes look at adolescence, gaming, poverty, and culture clash by one of the most visionary authors of our time. 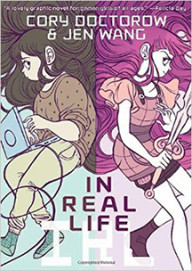 This event is free and open to the public. Book sales will be provided by Addendum Books: A Young Adult and Children’s Bookstore, and a reception will follow! PLUS: Teen audience members are invited to stay after Cory Doctorow's presentation; mentors from the St. Paul Public Library's Createch sites will be there to host a video game tournament!

Cory Doctorow is a journalist, activist, and award-winnning science fiction writer. He is a co-editor of the widely read culture/tech/politics site Boing Boing, a fellow of the Electronic Frontier Foundation, and a columnist for many magazines and newspapers. He was named one of the Web’s 25 influencers by Forbes Magazine. His many books include Little Brother, Homeland, and The Rapture of the Nerds; this fall will see the release of his book Information Doesn’t Want to Be Free: Laws for the Internet Age. Born in Canada, Cory Doctorow lives in London, England.