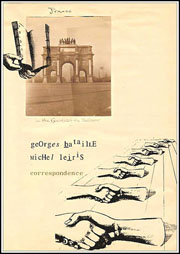 “Intimacy is violence,” French writer Georges Bataille proclaimed in his book Theory of Religion, “and it is destruction, because it is not compatible with the positing of the separate individual.” Though the context of this comment is Bataille’s elaboration of a concept of sacrifice, it applies equally to his notion of friendship, which is fraught with a sacrificial violence that ultimately dissolves individuals, establishing through their destruction a “sacred” communication—an intercourse between wounded selves.

The longing for such sacrificial intimacy colors the pages of this newly translated volume of correspondence between Bataille and one of his most intimate friends, the writer and ethnographer Michel Leiris. Bataille, who died in 1962, is perhaps best known in America for his sophisticated pornographic novel Story of the Eye, though English translations of much of his heterogeneous corpus—ranging across religion, philosophy, economics, sociology, and art—have revealed him to American readers as a crucial precursor to much postmodern thought, influencing the likes of Foucault, Derrida, and Kristeva. Bataille’s work—both his theoretical treatises and his fiction—emerges from his obsession with the sacred, a “prodigious effervescence of life” evoked, paradoxically, through a nearness to death (Theory of Religion).

Bataille’s fascination with such paradoxes and oppositions plays out in his friendship with Leiris. The two met in Paris in 1924, when Bataille was twenty-seven and Leiris twenty-three, their friendship forged amidst the intellectual and artistic tumult provoked by surrealism. Leiris was a member of the surrealist group; Bataille remained at its edges, eventually forming the center of a cohort of dissidents seeking to counter André Breton’s brand of surrealism with a more sinister variety. Leiris joined Bataille’s camp. But if Bataille and Leiris were allied in their criticism of certain aspects of Bretonian surrealism, they were also frequently at odds with each other.

Their opposition erupted most dramatically in their collaborations, and one merit of Correspondence is that it reveals the simultaneous attraction and repulsion that animated their joint undertakings. The first of these came with the short-lived but important art and ethnography journal Documents, a “war machine against received ideas” which bore the subversive imprint of Bataille’s editorial hand. (Leiris was on the editorial staff and contributed entries to the journal’s mock dictionary.) In the essay “From Bataille the Impossible to the Impossible Documents,” reproduced in this volume, Leiris expresses admiration for, and ambivalence about, the journal—and Bataille himself. Bataille “elaborate[s] that mystique of the ‘impossible’ (that is, what overtakes the limits of the possible and whose pursuit is therefore a pure waste of time),” Leiris writes. “It was [Bataille] who made the running in that bizarre game of loser takes all, the story of Documents.”

Despite indications of ambivalence, Leiris’s essay is an encomium for his friend Bataille, that “mystic of debauchery” who taught that “the only way to truly ‘live one’s life’ is to live it with fervid purity, in the dizzying manner with which death is lived, and, at one and the same time, with unbridled exuberance.” Yet Leiris’s renowned autobiographical works—Manhood and the four-volume The Rules of the Game—exhibit a sensibility that in many ways remains antipodal to the Bataillean traits he admires. Leiris is, as he repeatedly confesses, averse to the kind of risks Bataille promotes. Though his autobiographical works are maniacal displays of self-inspecting involution, risky in their confessional rigor (Leiris wants to reveal everything about himself, however humiliating), they are simultaneously the record of a self-proclaimed virtuoso of cowardice, frequently crippled by doubt, and at times nearly paralyzed by fear of injury, death, and contact with others. Expressing, with great nuance, erotic desires, Leiris nonetheless remains aloof in his relationships, and measured in his epistolary communications. He exhibits a hygienic will to distance at odds with Bataille’s compulsive desire to wallow in dirt, death, and decay.

But as William Blake wrote, “in opposition is true friendship”—and indeed, the letters and essays collected in this volume attest to an opposition that does not ultimately pry apart Bataille and Leiris, but rather invigorates their friendship. This is most apparent in the letters that relate to the College of Sociology, a small collective established by Bataille in 1937, dedicated to developing a pseudo-Durkheimian “sacred sociology.” Leiris was involved with the group as a lecturer, but in letters dating from 1939, leading up to the collapse of the College, he articulates a critique of Bataille’s methodological principles that can be read as a critical dissection of Bataille’s personality. Claiming the College is operating on “vague and ill-defined notions,” he finds in Bataille a troubling impulse to turn the association of intellectuals into a “moral community” resembling an Order or Church. Bataille replies to the critique on intellectual grounds, but he’s clearly wounded by Leiris’s “defection” from the group (undoubtedly all the more painful for Leiris’s previous refusal to join Acéphale, the secret society that Bataille had established a few years earlier).

Following on this clash—and perhaps even thanks to it?—Leiris and Bataille express a renewed tenderness. Leiris writes to Bataille that “it can only be that whatever binds us to certain others is the only thing that is humanly worthwhile, capable of surviving no matter what vicissitudes. . . . [B]ehind my words you will discover everything that I should like to tell you with the same spontaneity as a flood of tears or a burst of laughter.” Bataille fondly echoes Leiris in his reply: “It is not words that can make you understand the affection that binds me to you.”

If this tenderness seems at odds with Bataille’s penchant for sacrificial violence, one should consider the compassion that often underlies erotic combustion. In the end, the poignancy of this correspondence—continuing through the death of friends, wartime upheavals, and all manner of personal turmoil—owes something to the fact that Bataille plays the role of the passionate lover longing for dissolution in his friendship with Leiris, who in turn seems to withhold some of the affection that he nonetheless confesses. The letters and recollections assembled in this absorbing volume are a testament to the extraordinary desire for, and fear of, an intimacy so unreserved that it can rightly be called sacred.