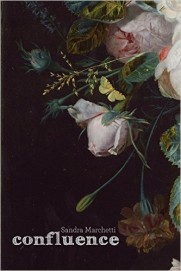 The “confluence” of this debut collection of poems may refer to several things: how these poems blend the style of Elizabeth Bishop’s piercing observations to the dense dexterity of Gerard Manley Hopkins’ musical language; the ecstatic merging of words with ineffable experience; and the passionate union of the lovers featured here, an aspect that makes Sandra Marchetti’s poems transcend mere imitation.

Arranged in three sections, the collection opens with the delicious language of “Never-Ending Birds,” where Marchetti aspires to meanings beyond language by using parts of speech in unexpected ways:

Soft bulbs of morpho blue,
tight light pruned to a circuit,
the swallows feather and vector the wind.

I plume to watch, freshed in the ground;
they ring the trees as their own
sweet planets.

From here, the poems of the first section introduce the lovers as well as recurring images of transitory elements: flowers, birds, eggs, icy surfaces, deciduous trees, weather, and the play of light. The poems progress by accretion of image and sound, accumulating appositive phrases and ambiguously placed modifiers so that meanings are amplified exponentially, as in these stanzas of “Storm Dialogue”:

Storms turn on their stomachs and gain on us.
Cloud decks smoke the windows. Beating cold.

Rain comes in shifts and pisses. Moving west
is the gesture; the skies shave the city gray.

The second section begins with “The East Highlands,” a poem about breaking new ground, and while many of Marchetti’s motifs recur here, the play of light on surfaces takes on added urgency in this section. Words like “glaze,” “slick,” “glint,” “lumen” or “luminescence,” “flash,” and “gleam” persist, teasingly offering insight, as in “Saints”:

They say
a glass with water
is the very hardest thing

to paint, the light
reflecting, a globe suspended
in wet wonder.

But this “wonder” may be glimpsed equally in the shine of the Northern Lights or in the post-coital slick of a lover’s body.

The third part begins curiously with a poem titled “The Waters of Separation,” where “we wait riven.” In many of the poems of this section, “Everywhere is sharp edges / even outside rooms”; images of what’s cut away, split, or pruned back abound. In “Orange Bouquet,” Marchetti describes cleaning a cauliflower:

Without a knife, each flower
clicks clean from the stem

as you said it would,
in a backward crack,

a snap of the head.

But it’s this pruning of the self that allows the possibility of union:

By night
my body disconnects,

from joints I wash toward confluence,
dissolved in a room of night

and this leads to the epiphany of “Pastoral”: “This is why I go out, / I think; it is something to recover from.” While the poet yearns for imaginative transcendence, she is equally drawn to the physical world. Firmly in the Metaphysical tradition, Confluence reminds us that the sensory and the spiritual are one.