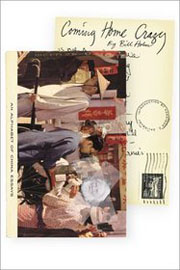 More than twenty years after Bill Holm first traveled to China, his writing still captures the spirit of the China experience. Coming Home Crazy is a vivid picture of a foreigner’s life in China, of teaching English abroad, and of the author’s delight in his students. Presented as an “alphabet of essays” with names like “Book Smuggling,” “Chinglish,” “Dumplings,” and “Swiss Army Knife: A History,” Holm's piecemeal approach brings together singular elements to evoke a rich and complex experience.

A treasured Minnesota poet and essayist who died in 2009, Holm was a perceptive, engaging, and funny writer. I stumbled across this book already hooked on China, some twenty years after its initial release, on my own trip to the Middle Kingdom. My experience coming from southwest Minnesota to cities like Shanghai and Chengdu echoed Holm’s jump from Minneota, Minnesota, to Xi’an, China. I was surrounded by people from everywhere except Minnesota, and, as is the shifting nature of identity, I felt more Minnesotan all the time. Holm's humor and insight spoke directly to my experience. His China is a grimy, gritty place where things are always breaking and everything is out of stock. In the midst of the cold and frustrating bureaucracy, he finds warm and wonderful people, dumpling recipes and Mickey Mouse, and the experience of a lifetime.

Contracted as a “foreign expert” to teach literature at a premier engineering university in Xi’an, Holm finds himself teaching students from all over the countryside. Noting the difference from his American students, he declares: “At last, I was teaching human beings for whom books meant something besides furniture and an intrusion into their beer money!” His students, not at liberty to choose their own majors, dreaded futures spent teaching engineers to translate technical writing, and were wholly absorbed by the literature to which he introduced them. He writes: “I had the feeling, as I did so often in China, that most of her technocrats and scientists would rather have been poets, calligraphers, or musicians if the world had been saner and sweeter.” Such was their fascination with English literature that they would follow him to his apartment and interrupt his afternoon nap to continue classroom debates, a behavior that simultaneously irritated and delighted Holm. With them he was able to establish friendships, visit their far-flung hometowns, and navigate Chinese society.

The choices Holm makes in translation show a comprehensive understanding of the language and the humor he finds in it. I’ve not been anywhere that sets apart foreigners quite as enthusiastically as China.Waiguoren is one of the first words any traveler there is likely to learn, usually from children pointing and yelling in his or her direction. Most translate it as “foreigner,” but Holm opts instead for “barbarian” to better capture the undertone that outsiders are and have always been less human, less civilized than those in the Middle Kingdom.

Holm battles constantly with administration officials, bank tellers, the “Barbarian Handler’s Office” at the university, and the local staff at a fancy Western hotel—on his own behalf and for his students, most of whom seem better able to tolerate injustice than he. At times the situations he recounts are amusing, if only in retrospect. He describes crawling out of a stalled elevator in a second-rate hotel only to find himself locked in the stairwell. With his ride about to leave, Holm raises his suitcase over his head, bangs it against the window and yells in “special English” that if they don’t unlock the door immediately he will break the glass. “Dong, bu dong?” he shouts—a Chinese phrase meaning “do you or do you not understand?”—and sure enough, someone comes running.

Since the book was written, China has become more accessible to outsiders and has relentlessly pursued economic development. Not everything Holm chronicles in Coming Home Crazy still exists in today’s China, such as ration coupons for flour, green cards for internal travel, and papers granting permission to spend the soft currency. Their mention is a reminder of the not-so-distant past.

Today's China is still in many ways a grimy, gritty place where things are always breaking. There is far more merchandise available, though it’s cheaply made and doesn’t last long. The predominant color in the landscape is gray. After repeated washings, the color even seemed to be leaching out of my clothes. Inefficiency abounds and construction is constant. In four months the sidewalk outside my apartment building was torn up and re-set no fewer than three times. Many buildings are concrete iceboxes, and hideous at that. The pretty, old, traditional buildings—those that seemed to give Chinese cities most of their character—stand the best chance of immediate demolition, and in their place appear yet more concrete boxes. All this leads to a pervasive sense of impermanence at odds with China’s millennia-old civilization.

And the bureaucracy! China is a nation of bureaucrats, fond of demonstrating their power through what they can keep from happening rather than what they can do to help, coming up against Americans who don’t like to be told what to do and aren’t used to others wielding such influence in even mundane matters. The control and censorship Holm chafes under is alive and well: the banned books you’d have to smuggle in, the topics you aren’t supposed to mention in public (especially the three T’s—Tibet, Tiananmen, and Taiwan), and now the battleground of the Internet and the Great Firewall of China.

Cheese is difficult to find, peanut butter and chocolate candy is all but nonexistent, and the wine is terrible. Yogurt is something consumed with a straw, not a spoon, and milk is powdered, though many Chinese don’t like the taste of dairy products and avoid them altogether. Despite this, eating is one of the most delightful things you can do in China. China has a rich array of regional cuisines and something for every price range, from street vendors selling bowls of hot noodles to elegant restaurants with platters of Peking duck. Eating is a communal activity; instead of ordering for yourself, you and your dining partners decide on dishes for the table to share. The dishes are usually placed on a lazy susan in the center of the table; everyone reaches their chopsticks into the mess and pulls pieces into their rice bowls to eat. Holm had a special affection for the dumplings of Northern China. Like other traditional dishes the world over, dumplings are as much ritual as sustenance, and best enjoyed in the company of friends.

Beyond all this, the overarching message of the book is about what happens to the traveler and why we should seek to inhabit new places and experience what happens when we do. Holm claims that every American in China for an extended period creates a re-imagined version of America. Sure enough, when I imagined America from China, it was filled with vast open spaces and blue sky; a place where people had houses (entire houses!) to themselves; where anything I wanted was available for purchase and everything was written in my native language; where censorship remained a foreign concept (or at the very least, I had unfettered access to Twitter and Facebook); where people freely baked things like cookies using ovens (none of this toaster-oven nonsense) and libraries kept their books out in the open for patrons to look at and touch and even take home.

And then there is the reality of coming home—having grown up on the Minnesota prairies, Holm noted the transformation China wrought. The place he had thought “the bleakest, most boring landscape on the world” became beautifully picturesque, filled with rich farmland and well-maintained roads, grocery stores overflowing with all the things he hadn’t been able to buy, and hardware stores selling “gadgets and parts that could have fixed half of China.” The landscape is the same, but the viewer is different.

This is what it means to come home crazy. China is a maddening, beguiling place, and just when you’re about to give up and go home, something makes you reconsider. There’s something about China that gets under the skin, that drives you crazy until you can’t wait to get away, only to find later that you can’t explain it to anyone back home, and shockingly, you miss it and want to return.