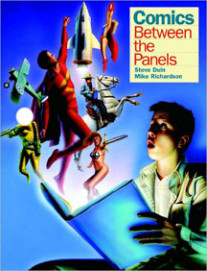 Need to know what drove cartoonist Bob Wood to commit murder? How about what the "S" on Jughead's sweater stands for? Or maybe you're just curious about the famous "Mile High" collection. All these and more are noted in Comics: Between the Panels, an encyclopedic history of the artform and the industry of comics.

Steve Duin accounts for this whimsical method by claiming that the book "was never intended to be a comprehensive reference work." Indeed, Duin and Richardson's writing has a highly personal flavor, attempting to "tell it like it is-or was" by recounting the legends and anecdotes that have amassed as the industry has grown. This anecdotal strategy makes the book accessible and fun, if a little rambling at times. Duin and Richardson also reveal a penchant for the old days that, again, is both historically useful but occasionally tedious. And of course the duo is bound to get flack about what has and hasn't been included. For example, there's a lengthy entry on comics historian Hames Ware but none at all on Chris Ware, the young genius behind the Acme Novelty Library; similarly, Li'l Abner creator Al Capp is all over the place but there's not a peep about Peanuts creator Charles Schulz. (Comics strips generally take a back seat to comic books throughout, a surprising blind spot.) But these complaints are quibbles, really. Comics: Between the Panels is a comics fan's dream, a beautifully designed and passionate appreciation of this particular corner of pop culture.