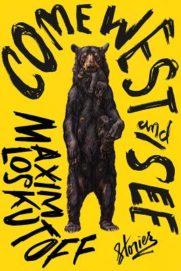 Come West and See, Maxim Luskutoff’s first short story collection, offers a collage of motley characters, some of them survivalists, and many of whom have doubts about themselves and their relationships, despite a veneer of bravado. The setting is the American west, where several of the protagonists are at war with the federal government. Some characters are loosely based on participants in the 2014 armed standoff at the Malheur National Wildlife. Though male characters are central to the stories, women are portrayed equally strongly. Many of the characters have been disenfranchised in contemporary America, and are taking futile measures out of desperation.

For those inhibited by provocative prose, Luskutoff’s writing may be disturbing, as it is filled with unforgettable details about people who live on the edge. In “The Dancing Bear,” the protagonist watches a grizzly from his cabin: “I suddenly realized I was erect. . . . I knelt, hiding my swollen cock behind the doorjamb, and, instead of thinking of protecting my home, I imagined running into her great hairy arms.” In “End Times,” Rye and his girlfriend Elli adopt Leon, a coyote pup, and find he’s different than a dog: “I’d find cat parts strewn around the yard: a paw wedged in the gate, innards on the tomato plants, a half-chewed skull on the welcome mat.” Eventually, the coyote and car in which they’re all riding become vehicles for a story about a failing relationship.

Lila in “Daddy Swore an Oath” is also caught in a failing relationship. Her husband Lane is in a desperate standoff with the feds at the Little Charbonneau Wildlife Refuge, where one protestor has already been killed. Lila and Lane consider themselves Jeffersonian constitutionalists, “but what good were liberty and Christian values if it was too cold to leave the house?” This story is as much about people going to extremes as it is about a neglected marriage and children, and Luskutoff weaves the two threads together skillfully.

“The Redoubt” refers to a fortified stronghold. In that story an insurrection has failed, and the main character is on the run in an ATV with his girlfriend Mercy. Apocalyptic scenes are mixed with the beauty of the mountains: “Above, lift chairs swung silently in the abandoned ski resort. . . . Small purple flowers strained toward the sun.” The characters in this and several other stories are adrift in a dystopian world partly of their own making.

Loskutoff’s tales draw readers in, and get us to empathize with characters we may dislike. These are people left behind, men and women with little pride who resort to desperate, self-destructive rebellion. This fiction is truthful in showing what’s at the heart of so much anger in 21st-century America. Let’s hope for more from this promising new author.