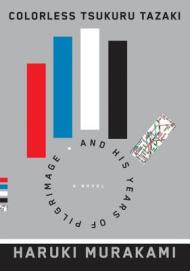 One year ago, amid secrecy surrounding the Japanese release of Haruki Murakami’s first book since his epic project 1Q84, readers lined up at many late-night booksellers in Tokyo to purchase copies of Colorless Tsukuru Tazaki and His Years of Pilgrimage. Anticipation was fueled by a campaign of containment that might make intelligence agencies envious—both author and publisher (Bungeishunjū) were cryptic or silent; press galleys and review copies were nonexistent. Only a small coterie knew anything of the content of the book, much less the actual title. On announcement, orders on Amazon Japan outpaced sales of 1Q84, even if beating its twelve-day sales record by only one day; a million copies were printed due to overwhelming demand.

Though the English-language publication of the book is not surrounded by the same level of secrecy, the anticipation leading up to the novel’s release is no less palpable. Because of the critical splashdown made by 1Q84, and the author’s reputation solidified by his previous books, American readers are equally hungry for this latest work by a contemporary master.

Murakami’s career has been a tale of two authors—the one who wrote fantastical narratives such as The Wind-Up Bird Chronicle and Kafka on the Shore, and the one who wrote Norwegian Wood, the product of a resolution to write a strictly realistic novel. Colorless Tsukuru Tazaki and His Years of Pilgrimage is a synthesis of both halves. It contains incidents of magic of everyday life, but without the focus on these events defining the lives of the characters.

The novel’s protagonist, Tsukuru Tazaki, lives and works in Tokyo as an engineer remodeling railway stations. He leads an austere lifestyle, in which he has few close friends and has been more of an observer than a participant. Of his relationships, he has had “no one he could call a close friend. A few girlfriends entered his life along the way, but they hadn’t stayed together. Peaceful relationships followed by amicable breakups. Not a single person had really climbed inside his heart.” This is a consequence of what he feels to be his “colorlessness,” an appellation that results from a closely-knit group of five high school friends, all with names including colors, that suddenly sever their ties to Tsukuru after he moves to Tokyo from his hometown of Nagoya to attend university.

Even the one friend that he makes during his studies, a free-spirited physics student named Haida, is associated with a color—his name means “gray field”—which, though a “fairly subdued color” is still, to Tsukuru, more vibrant than the meaning of his own name (reiterated throughout the novel, his name roughly means “to build,” a moniker he considers appropriate to his function, which is to build railway stations). Though the two young men are good friends, eventually their relationship peacefully falls by the wayside. Much as in other periods in his life, it seems like Tazaki is waiting for something just like passengers wait in the train stations to which he has dedicated his life, a pursuit that is not quite passionate. It is simply what he does in his transit between birth and death.

As the novel begins, 36-year-old Tsukuru is looking back on these friendships due to the compelling force of Sara, the woman whom he is currently seeing. Though he exhibits sexual interest in her, his characteristic lack of passion seems to drag on the relationship. Sara perceives that there is a kind of block inhibiting Tsukuru, one that relates to the dissolution of his high school friendships, and implores him to pursue the reasons behind their sudden disconnection, withholding intimacy (both sexual and platonic) and keeping Tsukuru at a distance until he sorts his problems out. The unfamiliar force of his interest and unrecognized passion for Sara compels him forward and he agrees to the arrangement, awakening a new interest in inquiring into the circumstances that compelled his once-close friends to ostracize him.

Through the course of his personal investigation, he reconnects with these friends, finding two of them staying close to home in Nagoya, one in Finland, and a set of murky circumstances surrounding the fourth. Ultimately, his search leads him to reflect on how he has crafted a parallel set of realities, a theme that Murakami has explored in a surrealistic mode in novels such as The Wind-Up Bird Chronicle and 1Q84. By contrast, Colorless Tsukuru Tazaki and His Year of Pilgrimage approaches the protagonist’s exploration of self much more realistically—looking into the value and interpretations that we attach to life-changing events, self-made symbols, and the stories that we tell about ourselves. Tsukuru’s pilgrimage is not unlike our own, often inexplicably twisted on directions that veer uncontrollably no matter how long we grasp onto our one true “roadmap,” our plans and plans within plans. Inevitably, things go awry, but that is the sign of a life lived and not a life spent on the sidelines.

Murakami’s other books have often pursued notions of dimensionality, asking questions about how planes of existence intersect (1Q84), overlay (Kafka on the Shore), or parallel each other (The Wind-up Bird Chronicle). In these stories, there is no alternate universe in which characters’ paths are not taken. With Colorless Tsukuru Tazaki, Murakami explores what happens to characters that ignore potential and possibility. Whereas the reader may often ask the existential question of hypothetical reality (the “what if”), the actions of Tsukuru and his four friends create the dimension of what is. The true tale of the novel is how characters choose to handle the situation. Each chooses their own forms of escapism, Tazaki included, and it is up to the protagonist to collect these shards of reality to piece together the dimension of the present. Again, much like many tracks might meet at a train station, the narrative threads all come together in the form of Tsukuru Tazaki, who realizes and assumes the role of the nexus, bringing him out of his “colorlessness” and endowing him with the zeal and passion for living.

Newcomers to Murakami will be welcomed by his typically straightforward style of lean, taut prose that outpaces the action of the story, the hallmark of his ability to write narratives of introspection that question the nature of reality. In the same way, his loyal fans will find a familiar voice that avoids falling into author-centric tropes even though the themes and material of the novel are mainstays for Murakami. In similar fashion, the author’s preference for the kind of “three-act” structure that exists in most of his other novels is extant here, matching his pacing better than it did in 1Q84.

Colorless Tsukuru Tazaki and His Year of Pilgrimage isn’t necessarily a groundbreaking book, but it heralds a moment that needed to happen in the sequence of Murakami’s impressive oeuvre—a return to relative realism after the last few novels’ intense exploration of the magical. The novel is accessible, and will usher in a new wave of Western readership for the author in addition to satisfying already loyal readers. The book asks the high-level questions characteristic of Murakami’s work while grounding them in a reality that provides a firm foundation for abstract soul-searching. As much as 1Q84 showcased Murakami’s boundless talent, this new release signals an author turning a corner into work that merges the best parts of his career, which will only whet readers’ appetites for what is yet to come.