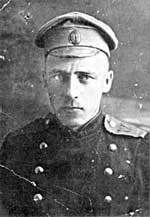 Little things are significant when they mark the start of the future, the way a falling star leaves a strip of fire behind it; they have to be going fast enough to pierce through the present. So far we haven't figured out where they get that speed. But we know a thing is right when it sets the present on fire, like a flint of the future.

Despite the fact that Russian Cubo-Futurist Velimir Khlebnikov only lived a short life of thirty-six years (1885-1922), the volume of work he left behind makes for virtually inexhaustible reading. It is not only the quantity of Khlebnikov's work that may provide the reader with a lifetime of amusement and exhilaration; the scope and nature of his vision of the world proves that he was deserving of the titles he and his cohorts bestowed on him, President of Planet Earth and The King of Time. And even though the King of Time has been dead for almost a hundred years now, his words still seem to have arrived from the future.

The goal is to create a common written language shared by all the peoples of this third satellite of the Sun, to invent written symbols that can be understood and accepted by our entire star, populated as it is with human beings and lost here in the universe.

Born in the Kalmyk Autonomous Republic in Russia, a region inhabited by Mongolian Buddhist nomads, Khlebnikov grew up to be well-educated in the disciplines of science, nature, folklore, mythology, mathematics, literature, art, history, and languages. By the time he met Vladimir Mayakovsky, Alexei Kruchonykh, and the other poets and painters who would become his fellow Futurist cohorts in St. Petersburg and Moscow, Khlebnikov had already begun to fuse these varied subjects in his thinking. Collaborations with his Futurist peers as they rebelled against the musty stodginess of the Symbolists before them helped spark Khlebnikov's literary output. And while many of the Russian Futurists were talented artists and writers, it is Khlebnikov who, in the end, represents, defines, and keeps Russian Futurism on the literary map today. Khlebnikov is the diamond, so to speak, on the gold band of the Russian Futurist movement.

I have discovered the fundamental Laws of Time, and I believe that now it will be easy to predict events as to count to three. If people don't want to learn my art of predicting the future . . . I shall teach it to horses.

Having published the first two volumes of The Collected Works in 1989, editors Ronald Vroon and Charlotte Douglas have now rounded out Harvard University Press's set with Volume III: Selected Poems. These three volumes are not only satisfying because of their literary content, but because the editors have included a thoughtful and informative biography of Khlebnikov, as well as introductions to the different sections of each volume that provide a context for the different styles and forms that Khlebnikov used to explore his world of ideas. It is hard not to be interested in a writer who kept his manuscripts in a pillow case under his bed, lectured soldiers in the Red Army on the cycles of time, and traveled through Persia in a long beard and tattered clothes as a lecturer/journalist for the Russian government, a writer whose goals for his life's work included the invention of a universal language and alphabet while working to discover and chart the fundamental algorithms that govern natural and historical events?a discovery that would allow him to do no less than predict the future.

Those who were inspired by these shadow-book communications were able to go off for a moment, write down their own inspirations, and half an hour later see their messages projected onto those walls in shadow letters by means of the light lens. 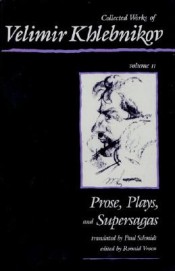 Volume I of the Collected Works contains Khlebnikov's letters, journals, autobiographical notes, essays on Russia and language, journalistic writings, and his visions of the future, where he predicts or calls for, among other things, the existence of television and global communication, a common system of hieroglyphs for the people of planet Earth, and the creation of a government of Inventors/Explorers to oppose the system of Investors/Exploiters and form an "independent government of time." Volume II contains Khlebnikov's prose and plays, which he hoped might break the "logical rules of time and space," and his "supersagas," a literary form of his own invention with texts arranged in "canvases" and "planes." "Narrative is architecture composed of words," he wrote, "an architecture composed of narratives is a 'supersaga.'" Volume III contains a generous selection from the more than six hundred poems that Khlebnikov wrote before his death in 1922, poems which combine unrestrained wordplay with Khlebnikov's vision for humanity. Embellished on the lid of his coffin by Khlebnikov's affectionate friends was a blue planet earth with the title: "The President of Planet Earth, Velimir I." It is a fitting tribute for a visionary who dared to imagine the unification of all people.