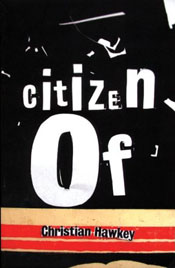 Though one often reads a book of poetry in its entirety to pursue an understanding of it as a whole, in the case of Citizen Of, Christian Hawkey’s lengthy second collection, this impulse develops from a more homeopathic insistence. A series of immediate pleasures—pleasures that progress comfortably with the support of a formal approach best described as purposeful looseness—fuel this urgency. For instance, in the long poem “Glenn Gould’s Chair,” which opens “It was a miniature chair. / It was a wooden chair. / He brought it with him / everywhere,” Hawkey’s sense of the line manifests itself just enough to maintain a feeling of determined structure.

Indeed Hawkey accomplishes a great deal within the constraints of short lines and a basic diction, often introducing elements into the poem via unexpected declarative statements. Look at what occurs in these brief couplets from the first of a series of poems titled “Hour,” which detail the transformation of a lump into a mound:

vomited on it
blowflies

swarmed in &
stuck to it

some thought it was a
hidden camera

& therefore wept
all over it.

Using heavy enjambment with short lines, Hawkey fosters not only tension but also a game of poetic carrot-and-stick in which he progresses by not completing his thought. This technique also mimics the lump’s process of accretion and demonstrates Hawkey’s ability to represent content by means of formal choices—an asset further highlighted by the fluidity with which the process of evasion is articulated in a later “Hour” poem:

The hole was not aware it was a hole
until it was uncovered. Then it became

a manhole, which I fell through,
over & over. I tried to move the hole

but there was another hole
beneath it, which I fell through,

over & over, an O. This
was my blowhole. I breathed through it.

More than anything, Hawkey sustains these 126 pages with a wit that emerges from the contemporary bog of poetic near-humor as a stranger, funnier, more aware and more able variety of humor—one interested in topics as varied as corn and anarchy, and which is able to contort political reality and abstract space with the same fluidity. The odd and evident truth of statements such as “we are happily held vertically alive” or “A bookcase, / viewed from behind, is not / the back of anyone’s brains,” is an aspect of these poems (perhaps suggested by the absent yet implied word or phrase in the book’s title) that gives value to the momentary comprehension of one significant particular, made greater for knowing it in the absence of the whole.