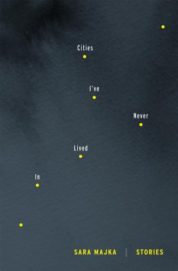 Sara Majka’s debut novel, Cities I’ve Never Lived In, blurs the line between memory and fact in a dream-like prose that follows the narrator, a women re-evaluating her life after a divorce, through a series of fourteen sad stories. These works include the protagonist’s process of falling in love with an alcoholic, the reunion of a couple years after their daughter’s death in a car accident, and the title piece, which details a cross-country journey spent serving in soup kitchens. Though the protagonist traces her memories through New England and cities abroad such as Poland and Berlin, the cities act merely as settings to the important people in her life that she associates with said places.

The opening story involves the narrator staying in a friend’s apartment on the East Coast while they are away, where the narrator confesses, “I was full of the feeling of being nowhere, or in someone else’s life, or between lives.” This feeling is translated exceptionally to the reader as the narrator recounts the melancholic lives that she knows intimately. The tales include ones of estranged fathers, husbands, and childhood friends, carrying an emotional weight that leave the characters and readers alike with an empathetic discomfort.

Majka’s prose is written in a fluid form that makes these stories appear dreamlike, or as if we are watching them from the back of a theater, unable to see the actors’ faces but able to follow the plot and see colors moving across the stage. The narrator’s observations are often accompanied by personal thoughts and questions about what she is witnessing: “She didn’t seem to want to look away, in the way that shy people can have while examining things at parties. Is that why shy people are so curious?” This strategy works well with the melancholic tone of remembering people one is no longer connected to in the same way. Lack of quotation marks blurs the space between what is thought and said aloud, an aspect that adds to the subdued, dreamlike feel of the work.

Though beautiful and poetic, the book can become tough to get through due to its morose and nostalgic content. For this reason, Majka was smart to break the work up into stories, allowing the reader to set down the book when the content sits to heavy on the heart. Although you may have to set it down at times, Cities I´ve Never Lived In is definitely one to pick up.