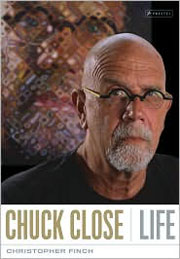 It is hard not to know who Chuck Close is. From his recent appearance on The Colbert Report to the New Yorker ad in which he is clothed in a black leather jacket and the “artist edition” Philip Glass T-shirt he designed for Gap, Close has accrued a media persona that soars way above the conventional notion of visual artist as celebrity. Authored by his longtime friend and colleague Christopher Finch,Chuck Close: Life attempts to grasp the magnitude and sheer force of the artist’s aesthetic and humanitarian reach, with mixed results.

For the uninitiated, Close revolutionized the sleepy genre of portraiture, transforming it from a passive to a dynamic act of seeing for both the viewer and the maker. Beginning with his first, staggeringly monumental, black and white Big Self-Portrait from 1968—acquired soon thereafter by the Walker Art Center, where Finch was then a curator—Close’s portraits, including those of his wife Leslie, Robert Rauschenberg, Roy Lichtenstein, President Bill Clinton, and Brad Pitt, among others, have raised the barometric pressure of the human face to levels heretofore unknown. Close has depicted his “heads” in a variety of scales ranging from little more than six inches in height to just shy of ten feet, and through a variety of media—oil and acrylic on canvas, pastel, watercolor, print, daguerreotype, and jacquard tapestry.

Now 70, Close’s own visage—shaved head, salt and pepper goatee, and steady gaze behind round ever-present glasses—is still striking, and he continues to document it in one form or another. That Close moves through his daily life in a wheelchair due to a traumatic physical Event (capitalized by the artist) in December 1988, which tragically left him a partial quadriplegic, has only intensified his drive to make art, his humanity, and his will to evolve and succeed.

Life is divided into three sections: Close’s early life in the state of Washington, BFA and MFA from Yale, and teaching career at the University of Massachusetts, Amherst; his subsequent time in New York City, from the Soho struggles of the mid-1960s to his burgeoning success in the 1980s; and the post-Event years, in which the artist has had to recreate his life and make art under an entirely new set of rules. In each section, however, the reader all but tanks in a tsunami of information. While some of it is certainly necessary, do we really need to know so much detail about grandparents and aunts and uncles? That Close had a number of serious physical ailments since he was a child is useful context, but after a few rundowns we get the idea that he had the will to overcome them in creative ways. It’s also brought up more than once that after his 48-year-old father died when he was twelve, his supportive but controlling mother made him sleep with her in the same bed; perhaps curious, it leads to little else later in the book. And following Close’s tragic Event, Finch reminds us unrelentingly how difficult it is to be a partial quadriplegic, and the great toll it took on Close, his wife Leslie, and their daily routine.

Finch is also prone to interpreting or analyzing a situation with “might have” or “may have” to the point of reader frustration. For example, of the separation and divorce of Leslie and Chuck Close in 2009-10, Finch writes: “In retrospect, it seems that extreme contrasts in personality might eventually have placed a severe strain on the marriage even without the unthinkable complications imposed on the situation by Chuck’s disability. That possibility would have been easier to deal with because it would not have been weighted with all of the feelings of guilt and bad faith that ultimately followed the cataclysm.”

Finch’s knowledgeable discussion of Close’s various styles, materials, and process is enlightening, but his frequently lengthy descriptions are underserved by the relative lack of images (although a companion volume titled Chuck Close: Work is available from the same publisher). The book succeeds most as a social history of the early years of New York’s downtown art scene, and in putting Close at the center of its transformation—the reader truly gets a sense of its maturation from the mid-1960s to the present day. Ultimately, however, Chuck Close: Life suggests that personal, decades-old friends may not make the best biographers.