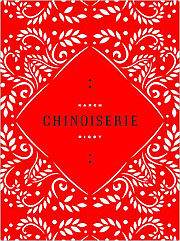 Karen Rigby shares the title of her new book, Chinoiserie, winner of the Ahsahta Press 2011 Sawtooth Poetry Prize, with objects. Chinoiserie refers to a mixture of European and Chinese design aesthetics that combines the delicate blue porcelain of China with the love of the lavish that characterized 18th-century France. Picture gold-rimmed tea sets with pagodas painted on them. The objects in turn reflect both cultures and yet are something new, both ornate and delicate. In this way, the poems of Chinoiserie mirror the title: they too are ornate, filled with beautiful and uncommon words and imbued with influences from many different cultures and places.

When first looking through the collection, titles like “Phoenix Nocturne,” “New York Song,” and “Orange / Pittsburgh” instantly show the geographical spread of the poems’ speakers, but what stands out, perhaps even more, are the notes under many of the poems that explain what art work the poem is addressing. Poems like “Cebolla Church,” noted as a painting by Georgia O’Keeffe from 1945, and “Maps We Have Produced in Technicolour,” which responds to the film Splendor in the Grass, directed by Elia Kazan, display the range of art that Rigby draws on for inspiration.

Whatever material the poems use, Rigby’s rich and specific language highlights it further. One of the collection’s longer poems, “The Story of Adam and Eve” converses with a page from an illuminated manuscript by the Boucicaut Master and Workshop circa 1415, mixing the speaker’s reflections on the page itself, the story of Adam and Eve, and the process of illumination. Rigby writes:

everything I know about beauty I learned
from the body’s ruin:
the rib drawn
through his quartered skin,
the skin sewn and the woman born,
a dark homunculus.

The language of the body certainly is sensuous, but what anchors these lines is the unexpected use of “homunculus,” a fully formed miniature human, which steps outside of the lexicon being used, yet is the exact word that best describes the image. Rigby’s exactness of language is seen again in this poem as the speaker describes the process of illumination, reveling in the language of specific objects used in the craft:

Think of the calligrapher

While Rigby may use high-culture references such as the aforementioned illuminated page, what makes this book feel entirely original is Rigby’s use of contemporary cultural artifacts as well. With poem titles like “Lovers in Anime” and references to movies like 2003’s The Dreamers, part of the joy of reading this collection is how it jumps from the 15th to the 21st century, from the Getty Museum to your living room couch.

Even when moving to territory that might seem like “low culture,” Rigby’s language remains complex, treating these subjects with the same graceful poetic eye. “Photo of an Autoerotic” provides an excellent example of this technique, as the poem opens with a description of the titular photo: “After the first shock, you have to / admire the body’s hardwood cursive.” Something that sounds bizarre suddenly takes on beauty due to the speaker’s description: hardwood, cursive—these are elements of beautiful objects. The language also elevates the photo itself; the reader first imagines it as a digital image on a computer screen, but then the speaker, reflecting on the photo and its origins, imagines: “the ones bowing to kiss themselves, / holding the pose for the shutter, / the aluminum flash.” Now we are in the world of artifact, an aging black and white photo from a different time.

In fact, throughout the collection Rigby has a sharp descriptive eye, authentically presenting specific images. The poem “Knife. Bass. Woman.” opens with a clear image of the speaker cutting and gutting a bass:

The wood handle thick
as a cattail. Two pegs the color of pewter
anchor the blade. In my left hand,
the knife. Eggs balance on the tip.
The bass hangs, its zippery spine
loose. Each stroke brings down
a host of scales. Skin rolls
like hose. Over soaked paper

The knife, the blade, the fish being sliced—all of this is painted with exact details and similes that bring us closer to the scene. Rigby then uses this description to take the reader beyond the moment at hand:

I understand why a man rapes
before dawn: for the red-rimmed eye,
fearful and waiting. For the puff
of cheek, air catching
her throat.

This understanding of violence becomes all the more palpable because of the exact description that preceded it. In this way, the thought, although provocative, makes sense and carries more weight in the reader’s mind.

Rigby consistently surprises and delights in this collection, weaving together image and reflection, creating beauty out of even the most unlikely sources.