The Chaos Walking Trilogy is a breathless ride, a mind-bending cautionary tale that challenges our ideas of power politics between ruler and subjects, men and women, and settlers and indigenous peoples. The New World is the promised land for these settlers from Earth who travelled so far on this one-way trip to seek a better life. They didn’t expect it to be easy, of course, but nobody expected such an enormous shift in how they perceive themselves and their fellow creatures. For the New World thrives on the free flow of information of its sentient beings, and that includes anyone who happens to touch down on its strange but promising shores. 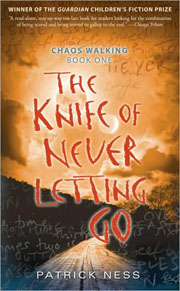 The first book in the trilogy, The Knife of Never Letting Go, begins in the settlement of Prentisstown where we meet twelve-year-old Todd Hewitt and his dog Manchee, who discover, in the swamp, a hole in the Noise. Although Todd has never known any different way to live, he suffers under the constant barrage of Noise from all the men in Prentisstown—there are only men in Prentisstown. As far as Todd knows, this is how it’s always been since they landed on the planet and fought the Spackle, the indigenous creatures of the planet, and all the women died, his mother among them. Since then everyone could hear each other’s thoughts, as well as the less complicated thoughts of the animals—dogs, horses, and other strange beasts of the land. And it isn’t pleasant hearing all these thoughts. “Their Noise washes down the hill like a flood let loose right at me, like a fire, like a monster the size of the sky come to get you cuz there’s nowhere to run.” The roar of tangled, raging, sorrowful, messy Noise fills the pages of the book in scratchy, scribbled, and scrawled letters, graphically creating a sense of claustrophobic, oppressive thought.

While one would think that there would be no secrets in this kind of world, they would be wrong. As Todd eloquently explains in his unlearned speech:

Cuz you can lie in the Noise, even when everyone knows what yer thinking, you can bury stuff under other stuff, you can hide it in plain sight, you just don’t think it clearly or you can convince yerself that the opposite of what yer hiding is true and then who’s going to be able to pick out from the flood what’s real water and what’s not going to get you wet?

The problem of trust is key to the dynamic of the whole trilogy, especially in a town like Prentisstown, whose mayor has developed a way to hide his Noise behind a disciplined mantra—“I am the Circle and the Circle is me,” spelled out in militaristic majuscules—a circuitous thought that buries deep his true intentions, and the true history of Prentisstown. However, when Todd and Manchee discover the hole in the Noise, it begins a chase that runs physically through the first novel and into the second, where the chase turns psychological.

The hole that Todd discovers is a girl, a girl with no Noise. Viola Eade is the second hero of the Trilogy, a young girl whose small scout ship crashed in the swamp killing her parents. Todd and Viola reluctantly join together as they escape Prentisstown and the Mayor, who wants to kidnap Viola and initiate young Todd into manhood in a particularly violently way. As Todd leaves Prentisstown and follows the river toward the rumors of other settlements and the final goal of Haven near the sea, he soon discovers that all the women didn’t die in the Spackle war, and that the unraveling of the lie he’d been living would change his life in ways he could never imagine. But there’s no chance to think about anything for very long, for the Mayor and all the men of Prentisstown are at his heels, destroying everything in their path, picking up malcontents and soldiers along the way. This first novel might also be called The Book of Never Putting Down. 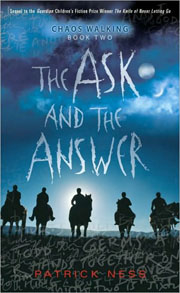 The true power behind these books, especially becoming more evident in the second book The Ask and the Answer, is their exploration of the dynamics of power in light of the telepathic qualities of the planet and its inhabitants. We soon find out that women can hear the thoughts of men, but the men cannot hear women’s thoughts. Todd and Viola discover that the settlements they pass through handle this dynamic differently. While Prentisstown got rid of their women—not a sustainable model—other settlements put the women in charge. But however the settlers manage or don’t manage this unforeseen glitch in the New World, this inequality wears on everyone and finally leads to another big battle. The indigenous people, dubbed the Spackle by the settlers, are all connected together in one hive mind, in harmony with the planet. Of course, this is as alien as can be to the settlers, and their response is to kill or enslave the Spackle. Meanwhile Todd discovers that his hope for finding peace in Haven is shattered by the very man he tried to escape—the Mayor and now self-proclaimed and conquering President Prentiss of New Prentisstown. Todd and Viola are split up and the President begins to cultivate young Todd, trying to brainwash him with subtle but insidious mind games.

The Ask and the Answer is perhaps the most unsettling and demoralizing of the three books as Todd battles his own inner demons and the Mayor masters the powers of the mind, amazing powers of control that are possible only in this New World. We discover The Answer is the name of a terrorist rebel group made up of mostly women, but also some men, living in the hills and plotting devastating attacks on the soldiers now in control of Haven or New Prentisstown. In response to the Answer, the President creates the Ask, a form of torture for those who don’t provide him with the information he wants. The escalation of atrocities mounts alarmingly, and meanwhile we see Todd and Viola on opposing sides, beginning to question each other’s actions and motives.

Ness deftly handles these nuances of thought as he moves seamlessly between points of view—we hear directly from Todd and then Viola, each with their own font to distinguish their voices. And there’s the use of a more emphatic, scribbled font to indicate thoughts of animals, like their loyal horses (one calls Todd her “boy colt” and other creatures they encounter (like the wonderful herd of “creachers” who sing only the soothing song of “Here”). Ness also handles the inner battle each of these intrepid teenagers face through the use of parenthetical statements, as when Todd tells himself to “(shut up)” when he doesn’t want to admit his true feelings to himself or anyone who is listening in. The narrative moves at a fast clip, often resembling a poem with lines ending in dashes as the story breathlessly rushes on. And when we face the wrath of the Spackle in Monsters of Men, another voice joins the telling—that of an escaped Spackle slave who seeks revenge for the genocide of his people, his voice represented by an unregimented sans serif font. 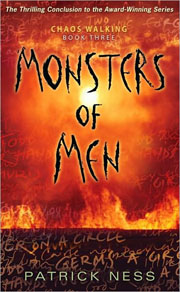 The final book in the trilogy takes its title from the saying that war makes monsters of men, and if this book is any indication, there isn’t a truer insight. Even Todd and Viola are not immune as they get swept up in the violence and betrayals that rain down upon them, forcing them into decisions they don’t want to make and actions that later sicken them with bitter regret. But ultimately they come back to each other no matter what, though Ness certainly sets up some treacherous hurdles and incredible plot twists for the two to overcome. Despite all the action—the bombs and armies and cruel torture—the characters remain complex in these books as they grow and change, adapting to the increasingly extreme circumstances. Ness has created some gut-wrenching storytelling as a powerful reminder that no one is exempt from responsibility for his or her actions, and it takes a strong character to face up to one’s mistakes, try to correct them, and move on to a forge better future.

Ness has written a prequel to the Chaos Walking Trilogy, The New World, which is more of a short story setting the stage for this tumultuous tale. This prequel is offered as a free download, and is a great way to get introduced to the excellent writing of this young British storyteller.