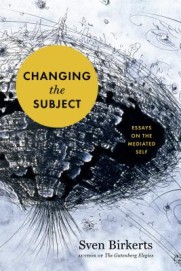 If you wanted to reduce Sven Birkerts’s Changing the Subject: Art and Attention in the Internet Age to a nice, digestible nugget of information, the subtitle gets you pretty much there. You can assume, rightly, that the book argues for art in the face of the Internet’s onslaught on our attention. Somehow, you intuit, Birkerts will make a distinction between art and the Internet that establishes a meaningful difference between, say, reading a single bound codex line by line and navigating infinite hypertext at your whim. If you’re not in a hurry, you could glance back at the title and notice a possible pun on the word subject. You might wonder if Birkerts is hinting that the way our digital culture is constantly changing the subject on us actually has the effect of changing the subject (i.e., you, me, him, or the self in general).

Now that you’ve decoded the book’s title, part of you might be thinking: do you really have to bother reading the whole thing? There are so many other books, articles, who-knows-whats out there, so much information coming at you in your various feeds and streams and clouds, why get bogged down? You can move from idea to idea. You can be free—infinite. This is pretty much how I read the Internet. I can’t bear to click on an article because I’m more interested in what other articles might be out there.

Here’s the thing about taking the time to sit down and actually read the words in this book instead of just assuming you get the point (even if you do): Changing the Subject not only argues but also embodies and performs its central claim that art is a necessary antidote to information. The proof is in the experience. To turn oneself over to an essayist is to see the world through someone else’s eyes. In the case of reading someone like Birkerts who sees clearly into his subject, it is to become (for a time) smarter than oneself.

And now subject points in at least three directions. Birkerts’s subject is the intersection of art and information; it is also his experiencing self; it refers as well to the reader’s self as she tries on his point of view. In a way, perhaps, the question has already been begged. If reading is old-fashioned, the notion of an individuated self may be too. Birkerts thinks so in the book’s first essay: “The realization of autonomous selfhood is no longer our primary beckoning ideal—if it ever was.” As connection continues to replace reflection, the self gets distributed across the various networks in which we enmesh ourselves

So who’s going to want to read this book? In class this morning, I caught my best student tapping away at a screen in the back row. This isn’t one of these students who is merely fulfilling a requirement, who communicate with all their being that truth or morality or whatever is not really worth getting worked up. No, my best student—the one whose comments are most insightful, whose readings are most penetrating, the one who asks engaged questions of her classmates and her teacher as well as of herself. There she was tapping away in her private bubble. Maybe it’s true that if she weren’t bored she wouldn’t have taken her phone out, but how can a classroom compete with literally anything she can imagine? That may be the core of the question of attention. In the old model of self it is a virtue to put one’s attention outside oneself, to concentrate on something that may not be immediately gratifying but that may pay off greater rewards later; under the new model there is no such thing as “outside oneself.” What’s the difference, from an eighteen-year-old’s point of view, between the information coming out of her teacher’s and her classmates’ mouths and the information available on her device?

For Birkerts a difference exists: “For, you see, contemplation is not a subset category, not just one kind of thinking among many. It is the point of thinking, its alpha and omega. Contemplation directs itself at the existential, which is to say, at that which pertains to the possible why of our being.” This is the central question of our existence, and the Internet can only ever respond to it by changing the subject. What if being human just doesn’t mean what I think it means anymore? What if the medium is the message? What if technology is never neutral? Merely to raise such questions puts one in a defiant camp out of step with the times. How much easier to go with the flow, the forward march of what Max Frisch (via Birkerts) calls technology: “the knack of so arranging the world that we don’t have to experience it.”

The counterargument that usually gets made is that Plato was against writing for the same kinds of reasons, and just look how naive he was. There are always those who are afraid of technological development and they always look foolish in retrospect. Never mind the tenuousness of taking one of Socrates’ arguments as Plato’s final position on the subject. What’s really misleading about the Plato-Luddite argument is that it depends on a false analogy between the writing revolution and the digital one. While writing externalizes—and thereby overrides—thoughts and memories, it simultaneously preserves (or even establishes) the self, whereas the digital revolution, in diffusing it, spreads the self out into nothingness.

If the latter prevails, it seems likely that the self we generally take as a locus of singular identity will come to be seen as a historical accident or a stage in development. But this is not a given. Development, progress—these are not givens, they just appear so when we think we seem them in the rearview mirror. The future is not the past extended. The forces of history are forces of history, and the future is up for grabs. If we decide that the self is something worth preserving, we can choose to curb the reaches of the digital revolution. And if not we, at least some of us.

Changing the Subject is a rallying cry. “To achieve deep focus nowadays is to strike a blow against the dissipation of self.” It is to preserve the self, to draw out the historical moment. Those of us who care about reading and reflection will be drawn in, empowered, reassured; we will find ourselves in the best company. Those who are inclined not to read Birkerts in the first place may well miss everything he’s saying.