The Oxford World’s Classics series has been issuing some of the finest in world literature for over 100 years; these two books are no exception. Both are bilingual editions that provide a feel for the structure of the original, even for readers who cannot understand Greek or Spanish. 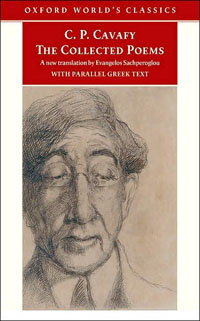 Born of Greek parents, C.P. Cavafy was born and spent most of his life in Egypt—Alexandria to be precise. Peter Mackridge provides a superb introduction to Cavafy’s Collected Poems, listing as influences the Parnassian, the Symbolist, and the Decadent and Aesthetic movements. The Parnassian, represented by such French poets as Leconte de Lisle and José-Maria de Hérédia, “consists of antique scenes. . . often aspir[ing] to resemble sculptures.” The Symbolist movement, represented by such French poets as Baudelaire and Paul Verlaine, “aspired to the state of music rather than sculpture, help[ing] Cavafy to make use of suggestive symbols, to express vague, fleeting impressions and feelings, and to exploit the evocative musical resources of language.” The Decadent and Aesthetic movements—represented by both English and French poets—with the former represented by Swinburne, Rosetti and Verlaine, and the latter primarily by Walter Pater, led Cavafy to develop “the view that experience is primarily an aesthetic matter, that art is the antithesis of nature, and that the senses need to be refined and new sensations pursued. . . in other words, the doctrine that art serves no social, spiritual, or moral purpose.”

Much of the subject matter of the poems relates to ancient Greek history. For example, “The Displeasure of the Seleucid” describes how when Ptolemy arrived in Syria in an impoverished condition, King Demetrius sought to restore dignity to this ruler and not have him the laughing-stock of the Romans:

This is why the Seleucid King Demetrius
was upset. And offered Ptolemy at once
robes of royal purple, a splendid diadem,
precious diamonds, numerous
servants and attendants, his most expensive horses,
that he present himself properly in Rome,
as befits an Alexandrian Greek monarch.

My attention was directed, by something said beside me,
toward the entrance of the café.
And I saw the lovely body that appeared
as if created by Eros in his consummate experience—

Eroticism is a theme Cavafy shares with Lorca. Another, which Lorca exhibited to a much lesser extent than Cavafy, is a Parnassian influence. Lorca’s “Elegy” captures both:

Like Ceres, you’d offer golden corn
to have sleeping love touch your body,
to have another Milky Way
flow from your virgin breasts.

You’ll wither like the magnolia.
No kisses burnt on your thighs,
no fingers in your hair,
playing it like a harp. 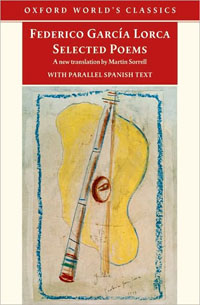 While both poets were influenced by music, Lorca’s was a spare, minimalist style reflecting the rhythms of Andalusia. From his volume Poemas del Cante Jondo, the poem “And After” evokes the sound of the castanets of gypsy flamenco:

The illusion of dawn
and kisses
dissolve.

Córdoba bells
at daybreak.
Dawn bells
in Granada.
All the girls weeping
to the tender, grieving soleá
recognize you.

In The Tamarit Divan, Lorca explores the ghazal and the qasida. The former has become a common form for contemporary poets to explore, but while many U.S. and Canadian poets have used the name while ignoring the strictures of the form, Lorca held to the original requirements. In “Ghazal IX—Of Marvellous Love,” he writes:

With all the gypsum
of the badlands,
you were reed of love, moist jasmine

With south and fire
of the bad skies,
you were murmur of snow in my breast.

Lorca’s qasidas, on the other hand, do not follow the strictness of this Persian form, which generally runs for more than fifty lines. “Qasida V—Of The Open-Air Dream” shows the influence of the Surrealists:

Lament for Ignacio Sánchez Mejias is Lorca’s most ambitious poem (and perhaps his most famous as a result of the movie The Disappearance of García Lorca). It is an elegy to a friend and aging bullfighter who attempted, at an advanced age, to fight one last bull; he was killed in the ring as a result of being gored. The first part, “Goring and Death,” contains one of Lorca’s most famous refrains, a device he was quite fond of:

Both Cavafy and Lorca have proven to be quite influential to North American poets. These new translations offer further testimony as to the many reasons why—and for a fairly reasonable price.