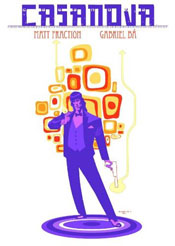 As part of the new “slimline” format from Image Comics that’s meant to be more accessible than the bulk of comics produced by the major publishers, Matt Fraction and Gabriel Bá’s Casanova is relatively inexpensive and generally self-contained. These constraints shape the comic, increasing the density of the story to give the reader what still feels like a full issue. In Casanova’s case, that means a visually and verbally intense comic delighting in its own rapid-fire complexity. Ironically, the reader who first encounters Casanova in collected form may have an advantage—it’s easier to keep the comic’s many moving parts in view when reading the seven issues as a single volume.

With its psychedelic flair, mix-and-match mash-up of genres, and baroque pop aesthetic, Casanova might be Fraction and Bá’s attempt to create something like a comics equivalent of the Beatles’ Sgt. Pepper album. Certainly, there’s a ’60s-style hipness to the comic, with its references to James Bond movies and the 1968 French film Diabolik (itself an adaptation of an earlier Italian comic). Title character Casanova Quinn is the cat-burglar wayward son of a family that runs a world-wide undercover organization. Pulled into a parallel dimension where he’s the well-behaved son and the top operative for the family agency, Casanova finds himself on a series of spy missions replete with mad scientists, mummy-wrapped megalomaniacs, metaphysically-superpowered mystics, armies of female robots, giant floating entities with triple-decker skulls and floating hands who look like Mayan hieroglyphs brought to life, and a wide assortment of double-crosses and elaborate plots gone wrong. Besides the over-the-top plotting, Fraction gives Casanova wall-to-wall snappy dialogue and plenty of witty scripting moves—a page on which all the word balloons are blank, or the recurring “talking heads” who offer fourth-wall-breaking character thoughts and editorial comments in the space between panels. Artist Bá keeps pace with Fraction’s manic storyline, creating image-packed pages that often mix a number of small, bounded panels with larger panels that bleed off the page and contribute to the comic’s sense of busy fullness.

Fraction and Bá’s synergy is evident all through Casanova, from the Diabolik-homage of the first page to the final issue, which includes, among much else, a fight scene inside a giant Japanese robot captioned with several crossed-out attempts at hyperbole (e.g., “The seven-fold smackdown six issues in the making!”) and a final declaration that isn’t struck out: “I love comic books!” The phrase could easily serve as the slogan for the whole of the collection; Casanova has the feel of a joyride, with Fraction and Bá opening up the throttle and seeing where the road will take them.