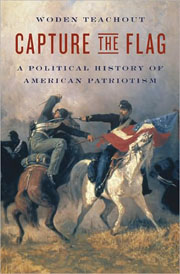 In the years between the terrible events of 9/11 and the last presidential election, displaying the American flag descended from a proud and mournful gesture of solidarity to an expression of vitriol. Car magnets and lapel pins with the flag’s image became symbolic chips on the shoulder. Hours of radio and cable TV airtime were devoted to the question of whether candidate Barack Obama would wear a flag lapel pin. His very patriotism—as well as that of Democratic congressmen, to say nothing of antiwar protesters—was continually questioned by conservatives, who virulently laid claim to the flag as their own.

Woden Teachout’s Capture the Flag is a timely reminder that such tactics did not originate in recent history. The book’s purpose, she writes, is to tell “the story of the flag’s political history: the ways in which it has been pulled back and forth, from one political party to another, from one social movement to another.” To this end, she has selected events from the post-Revolutionary period through the Vietnam era that illustrate the flag’s varying uses as a symbol: of defiance by American sailors held in British prisons; of nativism during the Philadelphia Riots of 1844; of oppression, as secessionists viewed it at the outset of the Civil War; of loyalty during the Populist era; of freedom during the civil rights era; and of social and economic disparity during the Vietnam War.

By linking these historical moments with a view to exploring how patriotism and the flag became tools for defending ethnic, political, and social turf, Teachout raises questions about the nature—and dangers—of the excesses that followed, when loyalty to one’s country evolved into chauvinism or national pride became xenophobia. She describes two kinds of patriotism: humanitarian patriotism, by which she means “an ideological commitment to democracy as a political and social system,” in which government is “the source of civil liberties”; and nationalist patriotism, which “presupposed a citizenry defined not only by a political covenant but also by a shared cultural, social, economic, ethnic, and geographic heritage.”

The distinction is semantically fragile—as well as politically charged—and not made clearer by the absence of a working definition of patriotism itself, the history, etymology, and uses of which would seem essential to a study like this. At times, the meaning of patriotism is treated as self-evident, which leads to further vagueness, as in this sentence: “The story of the American flag is the story of a country in search of itself, a country led sometimes by one sort of patriot and at other times by another, both kinds laying claim to the same American values and both claiming the flag as a powerful symbol.” What is meant here by “patriot” and by “American values”? Neither are defined, while the cliché “a country in search of itself” drains the sentence of meaning altogether.

Unfortunately such clichés recur. Here, for example, is Teachout’s romantic take on the life of a commercial sailor: “Any self-respecting young man of the eighteenth century looking for fortune and adventure found himself down at the waterfront. The waves knocking on the wooden wharves promised a magical world of adventure and fortune.” And here she opens her chapter on the election of 1896: “The 1890s marked a watershed decade in American history.”

One might be willing to skid past a few such phrases, but more troubling is Teachout’s tendency to rely heavily on secondary sources and to follow them at uncomfortably close range. Her chapter on the Ku Klux Klan, for example, makes extensive use of Wyn Craig Wade’s The Fiery Cross: The Ku Klux Klan in America (Simon and Schuster, 1987), citing it no fewer than twenty-one times in the chapter’s thirty-five footnotes. While Teachout’s narrative often moves closely in sync with Wade’s, a number of passages veer even closer. Consider this series of passages, alternately by Wade and then Teachout:

On April 27, 1915, Mary Phagan, a fourteen-year-old employee of a Marietta, Georgia, pencil company, was found raped and murdered in the basement of the building where she worked.

In the Atlanta suburb of Marietta, the body of fourteen-year-old Mary Phagan was found raped and murdered in the basement of the pencil factory where she had worked.

. . . Simmons turned his Klansmen into junior G-men who promptly began harassing prostitutes around military base . . .

The Klansmen harassed the prostitutes who gathered around military bases.

On September 19, it published a detailed account of 152 Klan outrages, including four murders, forty-one floggings, and twenty-seven tar-and-featherings.

By September 1921, Klansmen had been responsible for at least 150 instances of intimidation, including four murders, forty-one whippings, and twenty-seven tar-and-featherings.

And such borrowings are not limited to Wade. Here is an example from John Dittmer’s Local People: The Struggle for Civil Rights in Mississippi (University of Illinois Press, 1994):

Between 1880 and 1940, nearly 600 Mississippi blacks were lynched, and no jury would convict a white man for killing a Negro.

In the years between 1880 and 1940, white Mississippians had lynched nearly six hundred black men, a rate of ten lynchings per year.

Teachout credits her sources, but the above passages appear to be instances in which paraphrasing has bled into using the source’s very language and sentence structure.

Given its limitations, Capture the Flag is disappointing; the flag’s symbolic value and the question of what patriotism means are issues that deserve more care and thoroughness. Meanwhile, to those readers, librarians, and scholars who may be tempted to shell out $27 for this book, a time-honored warning seems appropriate: Caveat emptor.