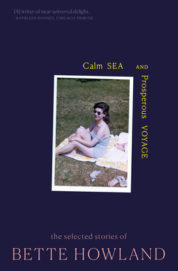 John Berger once wrote that “very few stories are narrated either to idealise or to condemn; rather they testify to the always slightly surprising range of the possible.” This truism illuminates the stories in Calm Sea and Prosperous Voyage, which are selected from Bette Howland’s three collections published between 1974 and 1983. Howland, the child of a working-class Jewish family in Chicago, writes about daily life, which is not always good, without belittling it as a subject. What would be unflattering in other writers’ hands is shown here without idealization and without contempt, in all its contradiction and wholeness.

In these stories, Howland reports with frankness the stubborn customs of her milieu: some poignant, some futile, all unlikely to change. When homeless people complain that the neighborhood is getting worse, Howland grants them the point (in a good neighborhood, we realize, they’d wouldn’t disappear—they’d have homes). Howland’s own father is too frugal to fix the light switches, so the family turns out the lights by unscrewing the bulbs. The branch librarian leaves her keys in the book drop after locking up, so she never loses them. These are the imperfect but practical solutions of people who may be beset by their lives, but have not given up on them.

The way Howland writes the library testifies to the wideness of her vision. Her librarian turns down a promotion to the central branch, too attached to her regular patrons. They are homeless, lonely, mentally ill—but Howland, through the eyes of the library staff, treats them with evenhanded acceptance. The library welcomes them in their differences, in their failure to fit smoothly into the logistics of society. This is fiction that admits the most important clientele of the library are people who need a free place to gather and—occasionally—to read (or, these days, to use a computer).

It is refreshing to hear, in Howland’s stories, a strong voice merged with a diligent stance of compassion. Her style, vivid and idiosyncratic, seems like an effect of this determined attitude. Take, for example, this observation in the aftermath of an awkward family wedding: “My uncle is a blunt and mysterious man to me. His life flows in another direction; I shall never understand it. And yet I felt closer to him than to anyone I had seen all day.” His life flows in another direction—Howland turns life into the subject. She affirms with simplicity that another person’s life does not merely pass by, but moves in its own right.

Howland’s stories sound, in writing, the way they would be spoken to an intimate listener. All of her protagonists are voyeurs, and all the stories resolve their watchfulness in moments of reflection. Partly autobiographical and partly fictional, they are private exercises in coping with the duress of a difficult life. Does watching it carefully make it more manageable? For Howland, it seems so. Over and over again, she trains her attention on basic details as the material of culture; the world in common, she seems to be saying, is composed of a million tiny gestures. Raising these moments from their semi-consciousness into the light of the page, she lets us join in her slight surprise at what, after all, was possible.