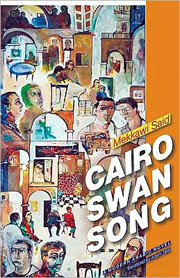 Author Nicholas Delbanco has said that one could precisely sculpt a friend in prose—describing her personal tics, her physical features, her history—and chances are she’d never notice. Give a character your friend’s name, however, and she’ll be sure to see her life reflected in your words.

A similar thing happens when an American character appears in a foreign setting: it can startle the American reader into self-recognition. Sure, that whiskey-swilling, angry imperialist is not exactly you, but he nevertheless functions as a mirror and critique. He shares a part of your name.

So it is with Mekkawi Said’s novel Cairo Swan Song, in which an Egyptian narrator and his overbearing American girlfriend struggle to make a documentary film about his country’s homeless children. This core story of love and exploitation is hung with numerous tangents: the narrator’s childhood sweetheart is reincarnated as a naïve university activist; a sex-crazed Egyptian authoress wants sex from the narrator, but then moves to Mexico; old friends become Marxists or Islamists, or go crazy.

These scattered threads take Cairo Swan Song far from the mirror it might otherwise hold up to traveling Americans and privileged Egyptians. The prose is also at times bombastic, full of sweeping generalizations. It tries to tackle Egypt and Dubai, colonialism and homelessness, Palestine and America and women.

Said’s novel has been very popular in Egypt, and made the shortlist for the inaugural “Arabic Booker” prize. It’s easy to see the book’s appeal. Sentences like “every one of us knows a ‘Khalil’ who’s ruined our lives and made them an unbearable hell” and “American civilization . . . [is] mostly the creation of robots, which do everything with precision and reject all error” might not show literary depth, but they can nevertheless be enjoyable to read. And hearing about the downtown Cairo elites is fun, like hearing tales of the rich and influential anywhere.

At its best, Cairo Swan Song does hold up a mirror to something very real about the line between art, charity, and profiting off other people’s exotic misery. Unfortunately, the book misses its chance to explore this line more deeply.