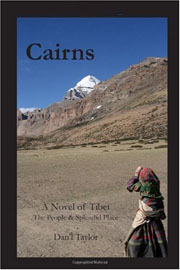 Books on contemporary Tibet tend either to extol the virtues of Tibetan Buddhism, often with special attention to the Dalai Lama in exile; or they are traveler’s tales, sometimes salted with exotic, other-worldly happenings; or they have a political agenda questioning the nature of Chinese suzerainty over Tibet. Tibet is a fascinating topic from any angle, and it is sure to garner attention among any random set of readers.

In Cairns, the second volume of a trilogy written by the American Dan’l Taylor, it is refreshing to find a captivating story of Tibet without magical spells or angry politics. Taylor, however, does not ignore the problems that Tibetans have faced at home and abroad since the 1950s, when China asserted absolute control over their homeland, nor does he alienate those who stand firmly on one or another point of view. His novel describes the simple life of villagers profoundly familiar with yaks and sheep, with poor farm soils and wildly beautiful mountain valleys, with trade and smuggling across snowbound Himalayan passes, and (tangentially) with leprosy.

Cairns is a novel about the difficult life and troublesome times of a Tibetan couple, Nima (her name means “sun of a new day”) and Tsering (“long life”), whose adventures encapsulate a wide range of contemporary Tibetan experience. Readers with strong feelings about the politics of contemporary Tibet may take issue with Taylor, implying that he neglects harsh political realities, but that criticism would miss the point. Cairns is not a book about exploitation, displacement and suffering; rather, it is about resilience, perseverance, and the eagerness to breach difficulties and prosper under new circumstances.

We are first introduced to the couple as furtive lovers; then we see them as husband and wife and as parents, while trying to work out several confounding mysteries. One is the whereabouts of their only child, who is sent off as a teenager to a Chinese school, then drops out of sight. They call him, generically, “Our Son,” as if he stands for all such youth who adapt to the new order of Tibet in modern China. Another mystery focuses on a vast treasure that has fallen, literally, into the disfigured hands of the lepers. Nima and Tsering are puzzled by the nature of the disease and by the plight of a close relative who lives among the lepers.

We follow the lives of the Tibetans as they cope with harsh physical and social environments. We see them as trans-Himalayan traders, then as smalltime but street-wise merchants catering to the whims of Westerners in Kathmandu. We also glimpse life in the refugee camps of north India. And, in the end, we follow the now worldly couple back to Tibet where they become key figures and role models for a Western organization engaged in creating the Qomolangma (Mount Everest) National Nature Preserve on Tibet’s southern border.

The basic theme of the book is that of confronting reality and pushing on. “For the ten years I saw myself as a refugee,” Tsering says. “I was poor. When I took what seemed worthless in one place and started selling that what I was really doing was pushing the boundaries that trapped me. It is not trade but boundaries. The people who get ahead are those who step across boundaries in a way no one had thought of before.” Tsering and Nima often speak philosophically about the up and down directions of their lives together. Tsering again: “Sometimes a shaft of light catches us lighting our life, more often we live under a cloud. Nima and I somehow fell through a hole, walked out of the mountains, and our lives opened to a whole world. It all seems so matter of fact when we live it, yet magical when looked at from a distance.”

Back in Tibet, while working for their community within the nature preserve, Tsering and Nima reminisce on what is right and wrong with Tibet. “Yes,” they say of the past that the Communist party has so often scorned, “there was exploitation, but to see Old Tibet only that way is like looking at your feet and not seeing the body that makes the feet work and brings feet together. A system that endured across centuries in the hardest of conditions had strength. Build from that. I’m proud of our past even though it was exploitive. . . The old brought us to the good we have today by building from the successes of each time, not focusing on the failures.”

In the novel, and in reality, the Dalai Lama’s influence on religious thought is ever present in Tibet, though largely hidden from the masters of the new order. There is an interesting observation in the novel by an American who suggests—naively, some may say—how the Dalai Lama might personally bring a renewed spirit to Tibet. “There is only one way,” he states. “The Dalai Lama must return the way he left. He must walk. He should announce one day in India that he is returning, open his front door, take the first step: walk north. Walk like a simple monk, for in the simplicity of a monk is his strength. Seek no guarantees for safety, guarantees that show he is afraid; simply announce he is going home, no chartered airplanes, simply walk.”

On the book’s webpage, Cairns is presented as the middle volume of The Lepers’ Trilogy, though the first and last books are not yet published. Also worth remarking is its participatory nature: at the start of the volume, Cairns is presented as a “before final publication” novel-in-the-making. Readers are invited to partner with the author to create a better, more well rounded product, thus giving Cairns a unique interactive identity.

Despite some typos and occasional clunky sentence structure, the middle volume reviewed here appears complete and compelling. Cairns is a tale of historical and cultural prescience, richly descriptive of Tibetan life during difficult times. Taylor’s understanding and descriptions of village life in Tibet and Kathmandu ring true, and in the Epilogue there are strong hints that the compelling plot is based on a true story.